Fireworks marking the official launch of the event drew loud cheers from the near-60,000 crowd. — Photos: FAIHAN GHANI and IZZRAFIQ ALIAS/The Star

SELANGOR bagged two out of three titles against Singapore at The Sultan of Selangor’s Cup (TSSC), holding on to the Selection and Schools Challenge trophies while relinquishing the Veterans’ trophy to the visitors.

Much to the delight of supporters, the Selangor Selection were able to keep the main title for the second year in a row after a nerve-wracking match that saw the hosts edging out their opponents 1-0 last Saturday.

The only goal of the match came in the 20th minute, courtesy of Ifedayo Olusegun Patrick Omosoyi who found the net with a header amid chaos in the penalty area after skipper Mohd Amri Yahya’s precise cross from outside. 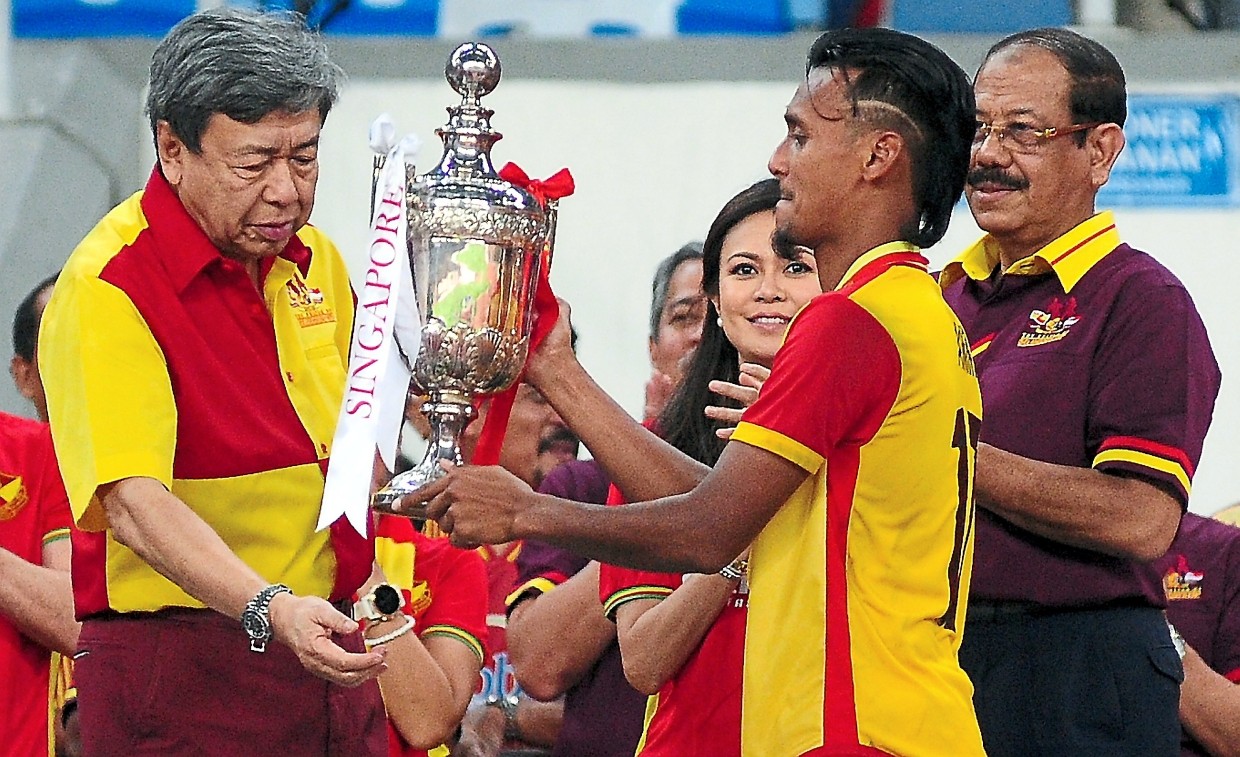 Sultan Sharafuddin (left) presenting the champions trophy to Amri (second from right) after the home side edged Singapore 1-0. Looking on are Abd Karim (right) and Tengku Permaisuri Norashikin. — Bernama

Selangor went on to tighten the screws on Singapore throughout the match with Sandro Da Silva Mendonca, Khyril Muhymeen Zambri, Syami Safari and Ifedayo in front.

Singapore’s goalie Syazwan Buhari was kept busy with a number of attempts by Selangor’s skipper, receiving much applause from the visiting Singapore fans.

Singapore came close to scoring on a number of occasions through Shawal Anuar and Irwan Shah Arismail but had their goals disallowed by the linesman for being offside. 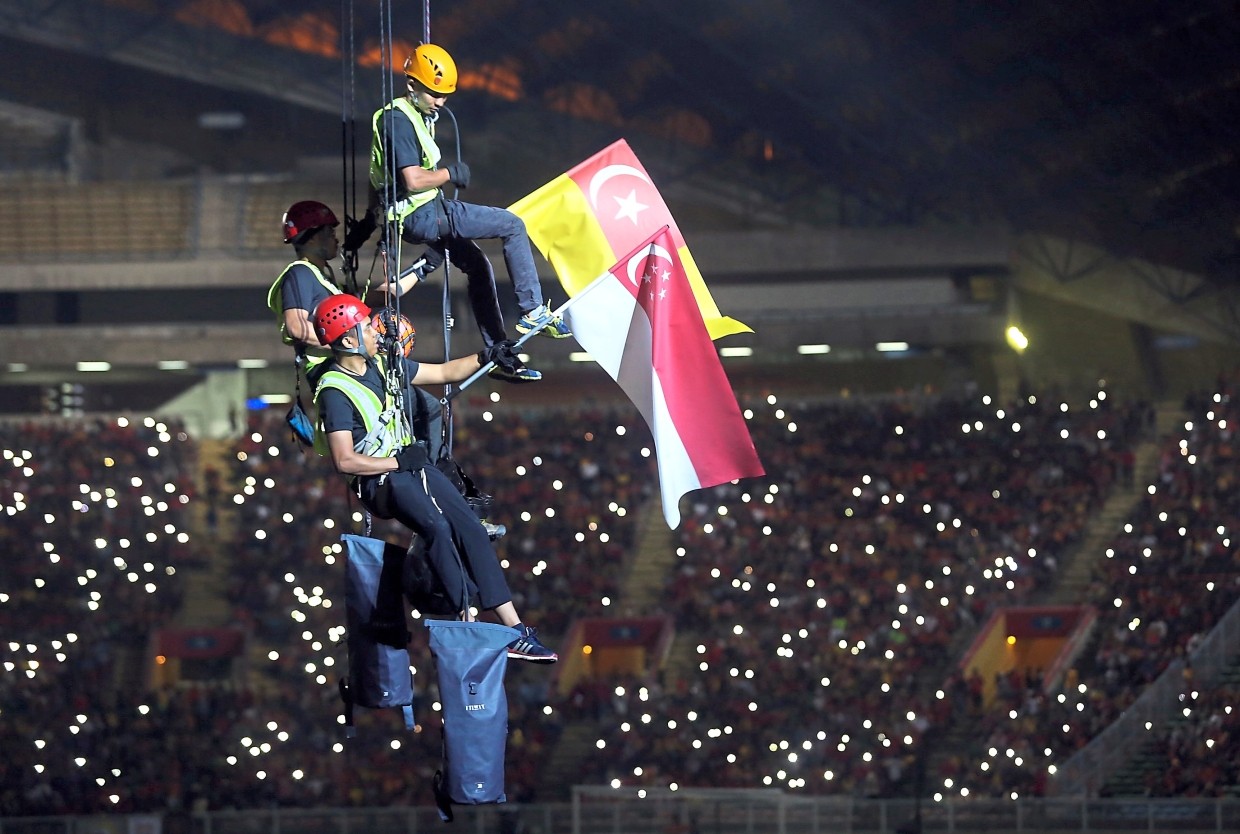 Three abseiling stuntman bringing down the Selangor and Singapore flags for the opening ceremony at Shah Alam Stadium.

Selangor’s goalie Mohd Farizal Harun also proved to be instrumental in thwarting Singapore’s barrage over the 90 minutes, allowing the home team to hold on to their lead until the final whistle. 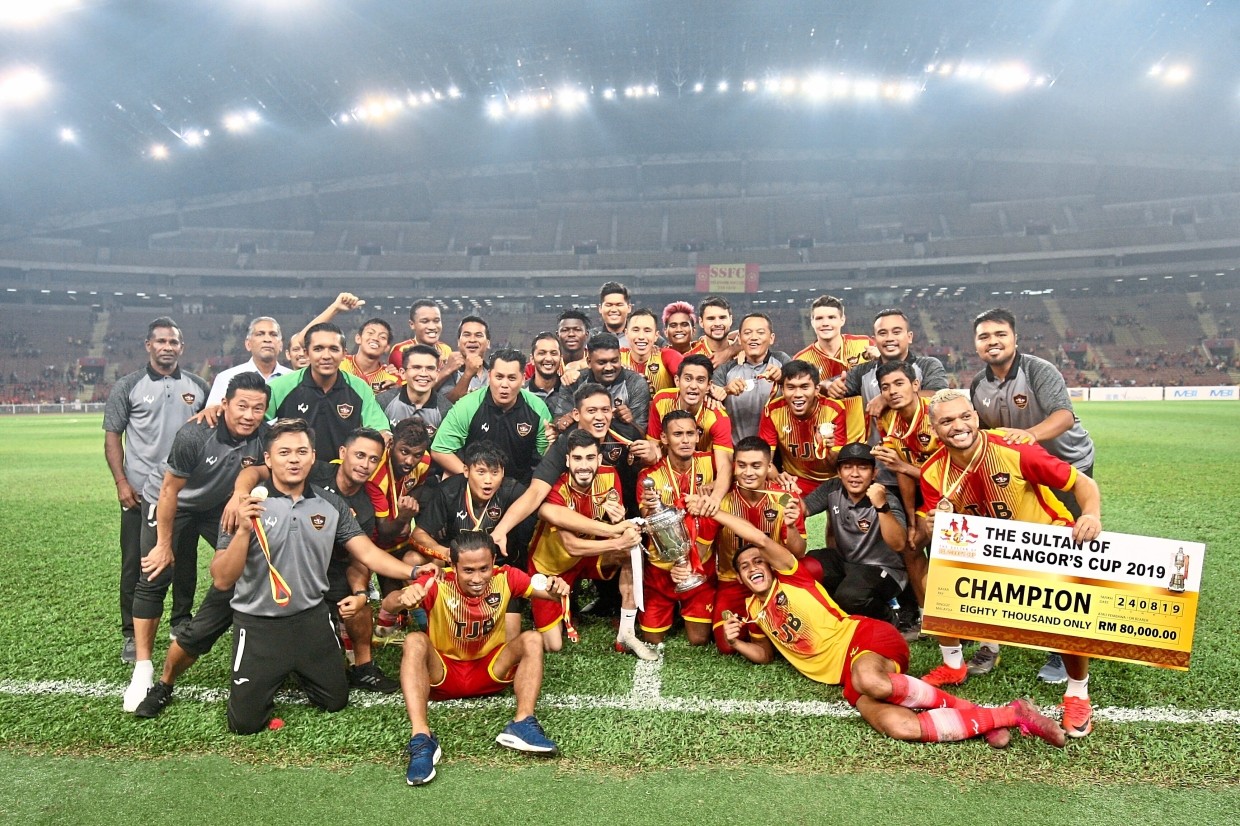 The Selangor Selection, which was coached by Super League coach B. Sathianathan, picked up their ninth title along with the sterling trophy and a cheque for RM80,000 from Sultan of Selangor Sultan Sharafuddin Idris Shah, while Singapore took home RM10,000.

In the curtain raiser, the Veterans’ match could have gone either way. But in the end, it was the visitors’ night to celebrate after defeating the Selangor side 2-0 on penalties.

V. Murugan and Reduan Abdullah along with their peers still showing good form despite having left professional football decades ago. 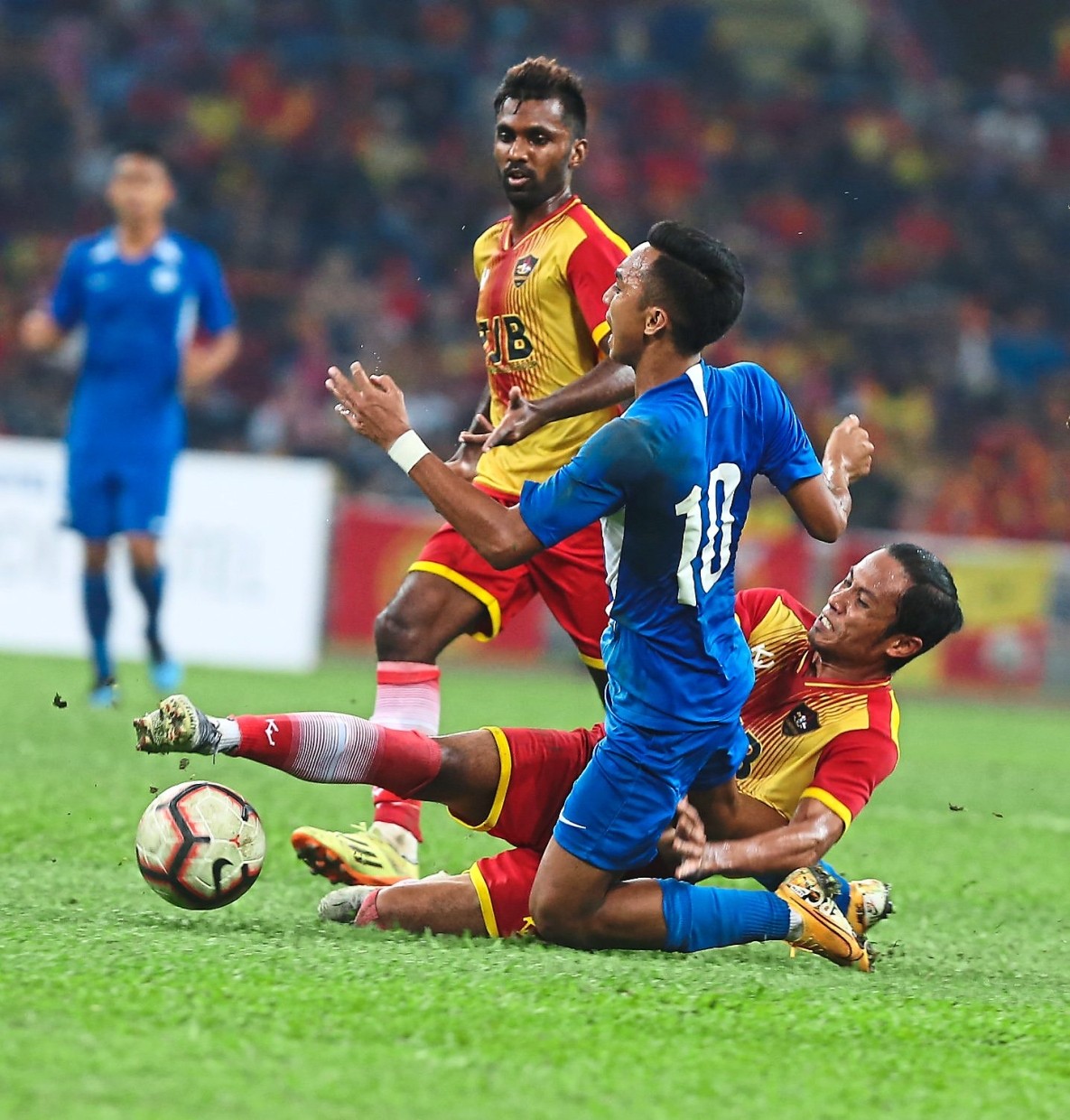 Singapore Selection’s Mohd Faris Ramli (in blue) being tackled by Selangor’s Khyril Muhymeen Zamri (on the ground) during the match.

Even though neither side could find the net during the match, there were a few close calls and the former state and national players gave fans plenty to cheer with their display of camaraderie and respect.

Selangor also managed to retain the Schools Challenge Cup this year after a 3-1 win over their counterparts even though Selangor’s youth squad got off to a shaky start in the Under-15 match. 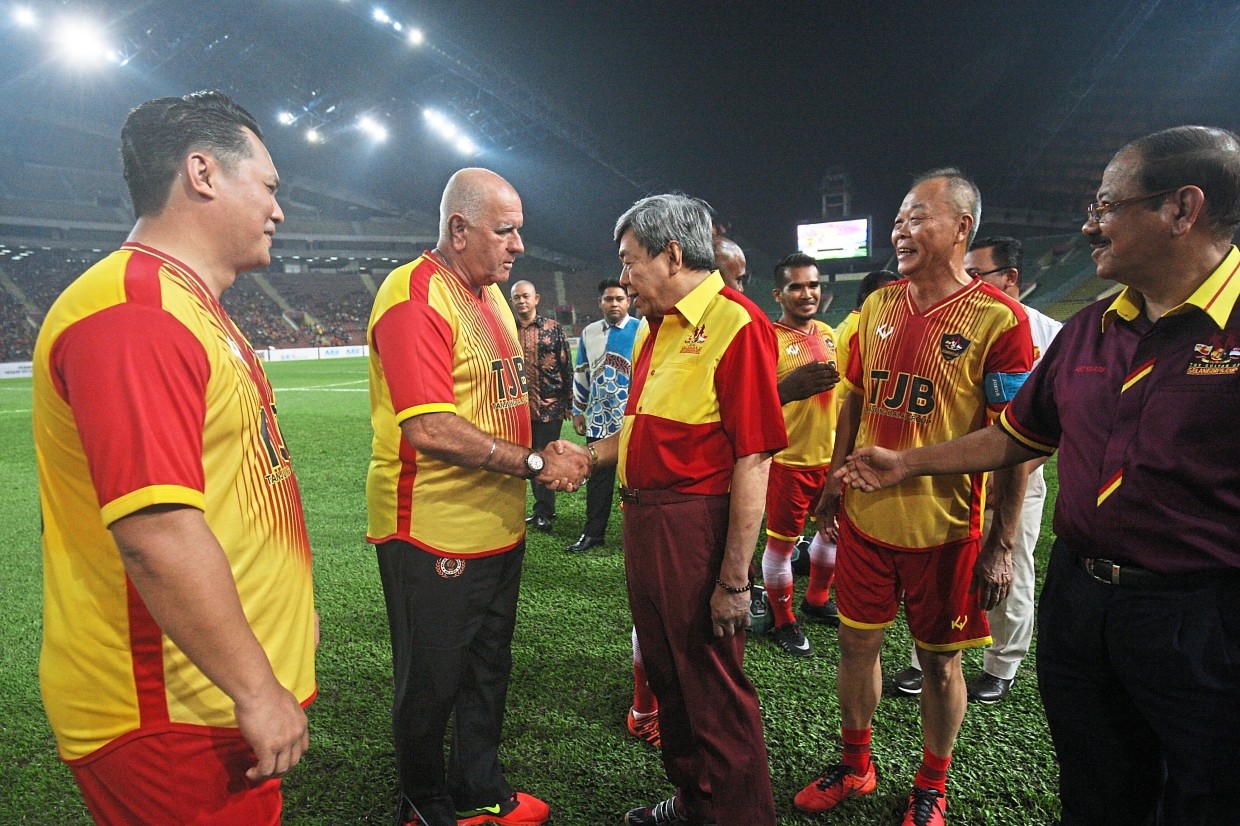 Selangor went on to take the lead through Muhd Afiq Haiqal and scored a third through Aliff Nufaill Azman before the halftime whistle. 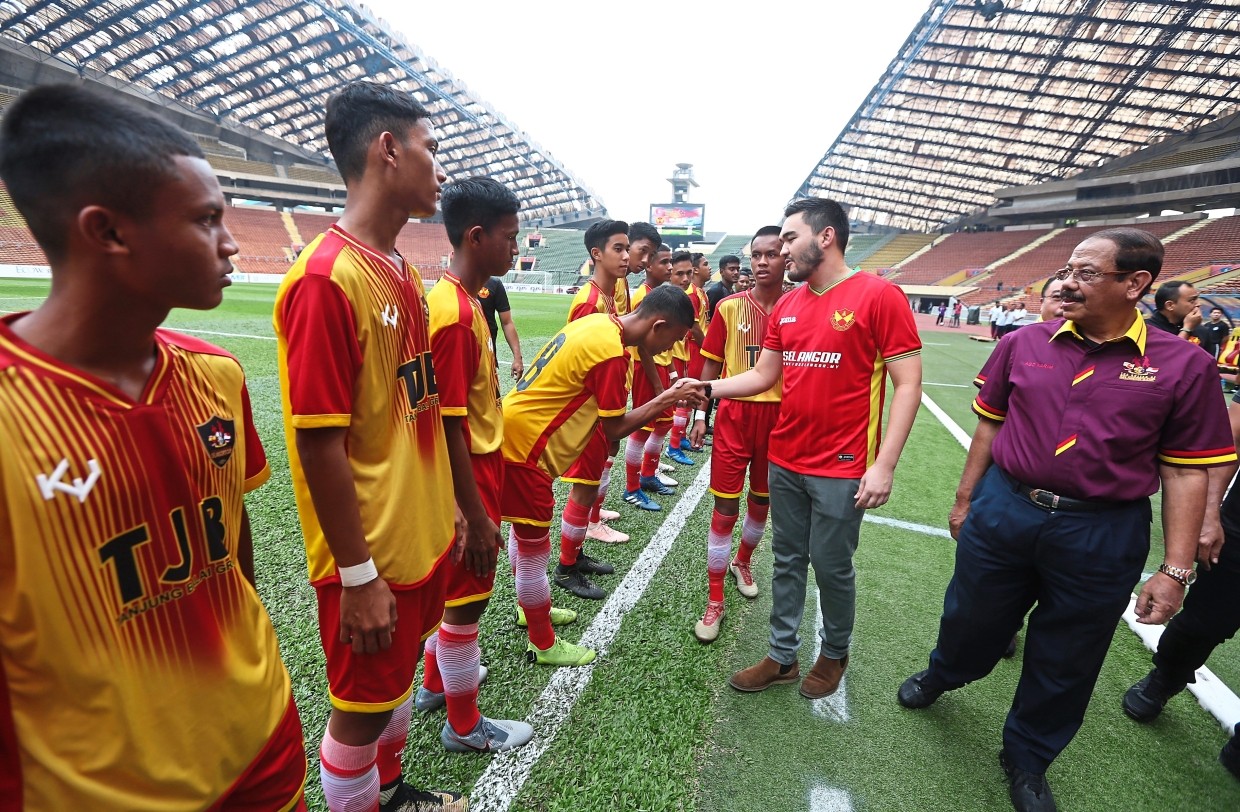 Tengku Amir Shah (right) shaking hands with the Selangor Under-15 players before their match.

Despite the numerous substitutions after the break, Singapore could not find a weak point in Selangor’s defence as they continued to struggle for momentum throughout the second half and had to walk away from the match second best.

In true TSSC tradition, the night was not just about football for the 54,920 in attendance and the 18th edition lived up to its reputation for having a one-of-a-kind carnival-like atmosphere.

Preceding the kick-off to the main Selection match, a convoy of 40 Harley-Davidsons rumbled into the stadium at the start of the opening ceremony.

Three stuntmen then abseiled from the roof of the stadium to hand over a football to Sultan Sharafuddin, who then launched the event by starting the light show and a spectacular fireworks display. 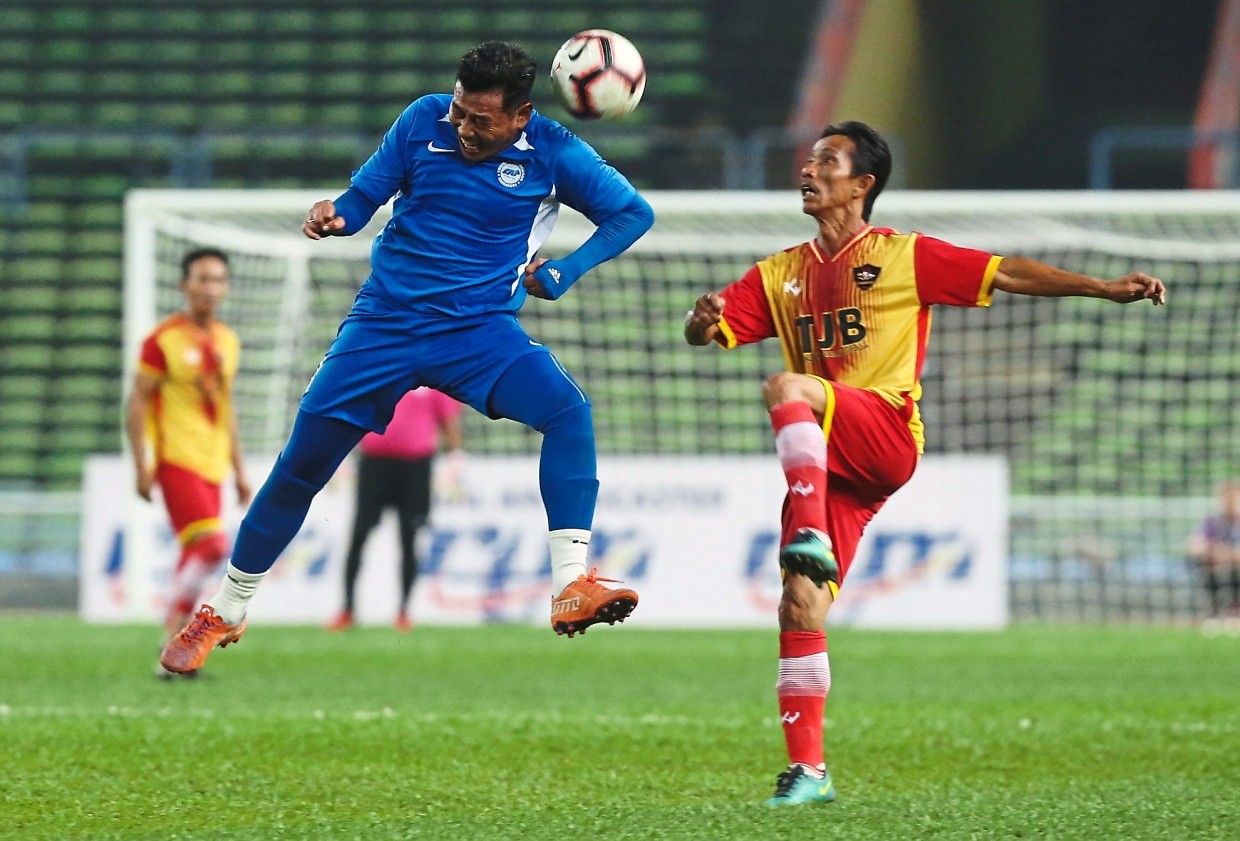 “We are grateful that everything that the committee had planned for the 18th edition went well. Hordes of Selangor (above) and Singapore (left) fans, both young and old, having a blast at the event.

“We are grateful for all the spectators that showed up to support their teams, ” TSSC organising committee chairman Tan Sri Abd Karim Munisar said.

“It was a great turnout today but it was what we expected as with previous years. And even though we won two titles, what is more important is that the fans are happy and that they look forward to next year’s edition.

“Both sides fought well in tonight’s matches but as is the case in sports, there has to be a winner and loser, so I have to commend all the players that were part of the matches for giving their best and showing a high level of sportsmanship, ” he added. 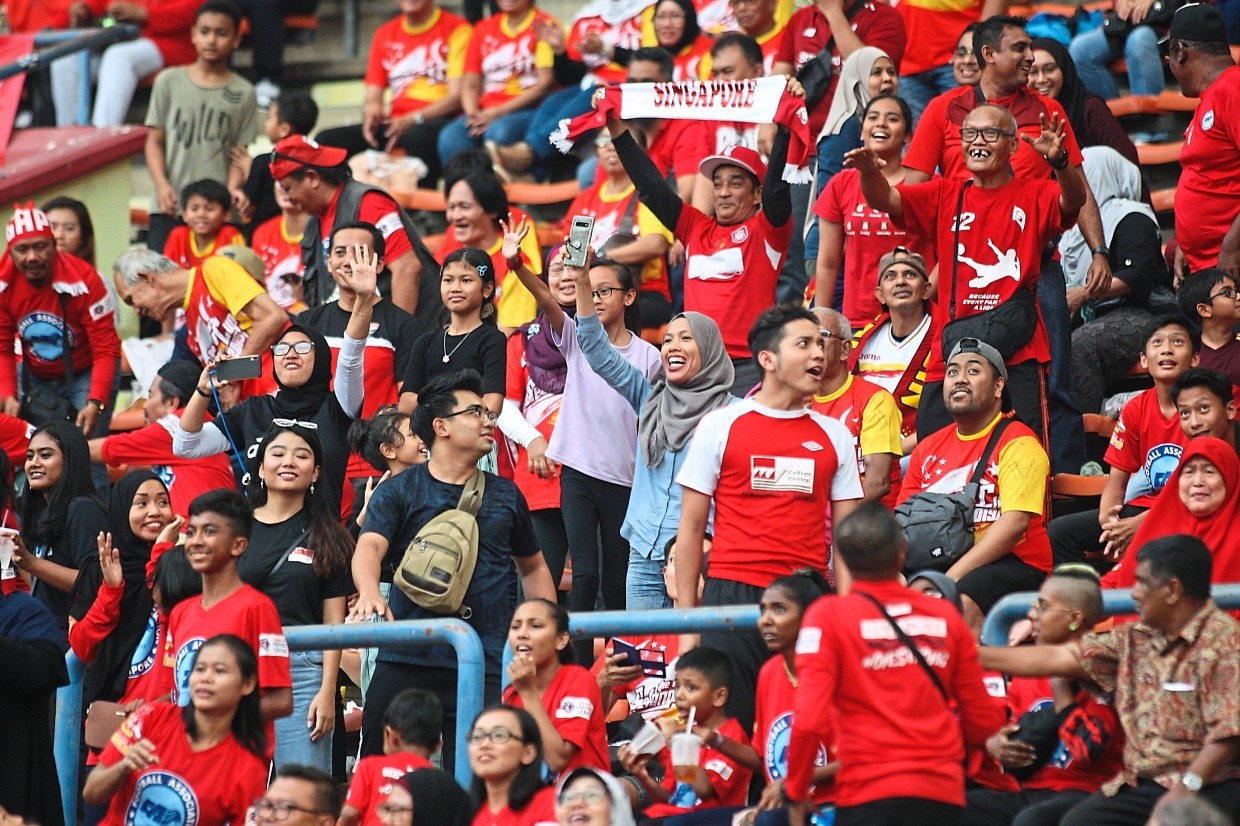 The ticket holders can call