Azriq out to wow the world with unorthodox bowling style

And the 17-year-old will be out to do that at the World Junior Championships (WJC) in Helsingborg, Sweden, in June next year.

Azriq is one of nine new inclusions in the national youth squad of five boys and four girls aged 17 and below. They are recruited specifically for the WJC, which pits the best Under-18 bowlers in the world.

Malaysia aim to make a grand debut after skipping the inaugural meet in Paris last year and Azriq is determined to bring glory to the country in his first international assignment.

“I’ve been waiting for this opportunity. So it’s a dream come true to join the national team,” said Azriq, who flourished under the Megalanes junior development programme since enrolling at the age of 10.

“I’ve got about nine months to prepare and I want to make the best of it under the guidance of coach Azidi (Ameran) and coach Alex (Liew).

“If I’m picked, my target is none other than becoming the world junior champion. If I can achieve that, it would be a major stepping stone because I look forward to a long and successful career with the national team.”

Azriq represented Malaysia in the Asian Schools Championships in Kuching two years ago and impressed with a haul of three silvers and one bronze.

He certainly deserved the call-up due to his achievements in local and international competitions over the past few years.

Last December, he pipped the older competitors to the Open (Under-21) title at the International Junior All-Stars Bowling Championships. He was also the Under-15 champion when the meet was held in 2017.

Azriq also proved that he is the best Under-18 bowler in the country by triumphing in the Masters event of the Nationals Sports School Council (MSSM) championships last year.

His inclusion in the national team means he is only the second bowler since ex-international Zulmazran Zulkifli to adopt the two-handed release approach.

However, Zulmazran switched to the technique towards the end of his career.

“I’m a natural two-handed bowler. I’ve used it since I was six,” he said.

“It’s not easy because not many coaches are well-versed in the approach. I had to go it alone and along the way, I received guidance from Syimir Abdul Razak and Alisah Iman Cheong (former internationals). 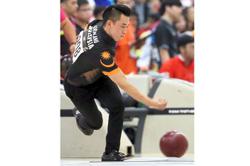