PETALING JAYA: It was a case of so near, yet so far for junior bowlers Ahmad Azriq Izamudin and Alyaa Addini Zulamri in the International Bowling Federation (IBF) Under-21 World Championships.

They were a whisker away from the gold medal after having reached the final roll-off in the men’s and women’s singles events.

Alas, their rivals proved too strong in the showdown and they had to settle for the runners-up medal.

The 19-year-old Azriq, who has an unorthodox two-handed delivery style, lost to Sweden’s Carl Eklund 1-2 in the final at the Olympia Bowling Arena in Helsingborg, Sweden.

In the decider, Eklund was imperious as he trounced Azriq 279-192.

Azriq’s silver in his debut was the first for Malaysia in the Under-21 world meet.

In the women’s final, 21-year-old Alyaa got off to a great start in the first game but a resurgent Singaporean Colleen Pee bowled consistently to win 213-190.

The second was an entertaining neck-and-neck affair with a tie-breaker needed when the score stood at 212-212.

Despite the good showing, Alyaa was unhappy.

“I feel quite disappointed with myself today because I already threw a good shot but ended up in second place. No doubt Colleen did well and had better pin-carry,” said Alyaa.

“All I can say is that I’m still grateful for the silver medal, but I need to improve on my game.”

Malaysian pair Airel Amri Suhaimi and Megat Zaqrul Haiqal Megat Zairudin won bronze in the men’s doubles after losing 2-0 to Sweden’s Eklund and Robin Ilhammar in the semi-final. The Swedes won 208-189 and 259-189.

“Both of them fought and made some great shots. They didn’t go down without a fight.

“That to me must be lauded, especially in their first international competition after two years.” 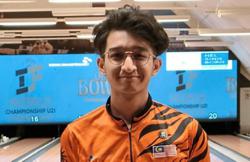