KELANTAN’S Chan Wen Tse and Mohd Haikal Nazri had no time to train together before the Malaysia Games (Sukma) but that didn’t stop the mixed doubles pair from reaching the final.

Yesterday, the duo, who were also playing together in their first tournament, combined well to beat Melaka’s Tan Kok Xian-Yap Ling 21-17, 21-15 in just 26 minutes in the semi-finals at Axiata Arena in Bukit Jalil.

Seventeen-year-old Wen Tse, who is part of the national junior set-up, had to go through selection for the World Junior Championships in Santander, Spain, from Oct 24-30 before the Sukma and could not link up with Haikal.

“Haikal and I never expected to reach the final. We couldn’t train together before the competition as I had to go through selection for the world junior meet next month. But thanks to Haikal’s guidance and support on court, we managed to make it,” said Wen Tse.

“In our matches, Haikal told me to focus on the front court and he will cover the back. We also discussed ways to improve our combination play,” added Wen Tse.

Wen Tse admitted that she and Haikal faced a tough challenge but has vowed to go all out to secure the title for Kelantan.

“It has been a long time since Kelantan had a gold medallist in badminton. Haikal and I want to end this wait. We know it will be tough as we face the top seeds but we will give our very best,” said Wen Tse.

Meanwhile, it was double joy for both Kai Wun and Ee Wei as they also made it to the men’s and women’s doubles finals along with Tan Kok Xian and Yap Ling respectively.

In the men’s singles, hot favourite Ng Tze Yong of Johor safely made it to the final after defeating Selangor’s Aidil Sholeh Ali Sadikin 21-14, 21-15.

The women’s singles final will be an all-Selangor affair between Siti Nurshuhaini Azman and K. Letshanaa. 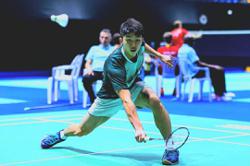