Doubly hard to carry on

PETALING JAYA: A short stay but a successful one in the face of adversity.

Yesterday, Chong Ming resigned from the Badminton Association of Malaysia (BAM) after successfully establishing the women’s doubles department and turning Pearly Tan-M. Thinaah into a household name just within a year.

Chong Ming’s heart is in the sport but he had to leave because of his family commitments and business obligations.

“Over the past 18 months, I have worked with some amazing characters. I will always cherish being presented with the opportunity to train a pool of talented individuals and will always be grateful for all who supported me as the head coach,” said Chong Ming.

“In all, I’ve spent almost seven months overseas this year for all the big and minor back-to-back tournaments, transits and quarantines. I’ve returned home with my mission completed.

“But I’ve missed my family and I’m now required to be there for a business I’m involved in.”

Working tirelessly but quietly behind the scenes, Chong Ming has turned Pearly-Thinaah from a pair ranked 52 to 16 in the world just within a year.

“My time in BAM has been fruitful because of the people who have trusted, supported and mentored me,” said Chong Ming, who was picked by national coaching director Wong Choong Hann for the job.

“We have established a new standard in our training programmes by using a scientific approach in which we combined all aspects of technical and tactical strategies into our regular training.

“Indeed, the fruit of our own hard work is the sweetest. Together, we can hold our heads high as we have achieved great and notable milestones in the women’s doubles in just one and a half years. “

Under his tutelage, Pearly-Thinaah won their first major title at the Swiss Open this year. They were also quarter-finalists in the Thailand Open 1 and 2, Indonesian Masters and qualified for the World Tour Finals in Bali for the first time.

More than their humble beginning, it was the chemistry and fighting spirit shown by Pearly-Thinaah that won the hearts of fans.

“I truly believe that women’s doubles, especially Pearly and Thinaah, will soar even higher at major events and because of the right foundation set this year, they should make it to the top eight next year.”

The national No. 1 partnership of Lee Meng Yean-Chow Mei Kuan also enjoyed one of the best years under Chong Ming when they broke into the top 10 for the first time in March.

While focusing on the seniors, Chong Ming did not neglect the juniors and under him Valeree Siow-Low Yeen Yuan bloomed.

“Of course, the achievements are a result of collective contributions from all departments, not forgetting the players themselves who train hard day every day,” said Chong Ming, who thanked all.

“It has been an honour and a privilege to play a part in the transformation towards becoming competitive.

“I hope BAM will carry forward this legacy for continuous success. Badminton is part of my life. I won’t just stop my passion here. I will still be involved in coaching at my academy,” added Chong Ming, who has indeed done well as a doubles player and a coach under the BAM. 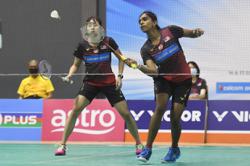