PETALING JAYA: It’s Malaysia against their arch-rivals Indonesia in the quarter-finals of the Thomas Cup Finals – but can the young team led by Lee Zii Jia topple the badminton giants?

On paper and current form, it does look super tough for Malaysia to go beyond the last eight at the Ceres Arena today.

Indonesia seemed to have regained their form with an inspiring show by their singles players in the final group tie against Thailand a day ago while Malaysia showed lack of depth in their 1-4 defeat to Japan yesterday.

World No. 8 and skipper Zii Jia is expected to play against Anthony Ginting in the first singles.

In the Sudirman Cup, Zii Jia showed class in defeating Anthony in straight games, which eventually led the team to upset the mighty Indonesians in the quarter-finals in Finland two weeks ago.

National coaching director Wong Choong Hann said it would be impossible for Malaysia to beat Indonesia if they continue to depend on Zii Jia alone.

“It’s crucial to get a good start as usual but Zii Jia alone can’t win for the team. All players need to double up their efforts to create an upset,” said Choong Hann.

Aaron-Chia will have a chance to redeem themselves against world No. 1 Marcus Fernaldi-Kevin Sanjaya in the first doubles.

The Malaysians have beaten them twice in the last two months and it may prompt Indonesia to tinker with the doubles line-up.

They also have world No. 2 Mohammad Ahsan-Hendra Setiawan and world No. 7 Fajar Alfian-Muhammad Rian Ardianto.

They may push youngsters Fajar-Rian as the first pair and form a scratch partnership in the second doubles.

They however, may stick with Marcus-Kevin and challenge them to redeem themselves against Aaron-Wooi Yik.

The second singles will likely be between Cheam June Wei and Jonatan Christie as the Malaysian has beaten them before while they may stick to Leong Jun Hao in the third singles who did well to win a point against Japan in the group.

In the second doubles, Goh Sze Fei-Nur Izzuddin Rumsani seem to be the better bet.

“Aaron-Wooi Yik did not fare well but I believe they have the depth to bring their A-game. I believe Zii Jia, Aaron-Chia and the first-timers will fight as a team to deliver the three points.”

Indonesia have had better record against Malaysia in the Thomas Cup Finals, having won nine of their 14 meetings. In fact, it was Indonesia who stopped Malaysia’s progress in the quarter-finals at the last edition in Bangkok in 2018. 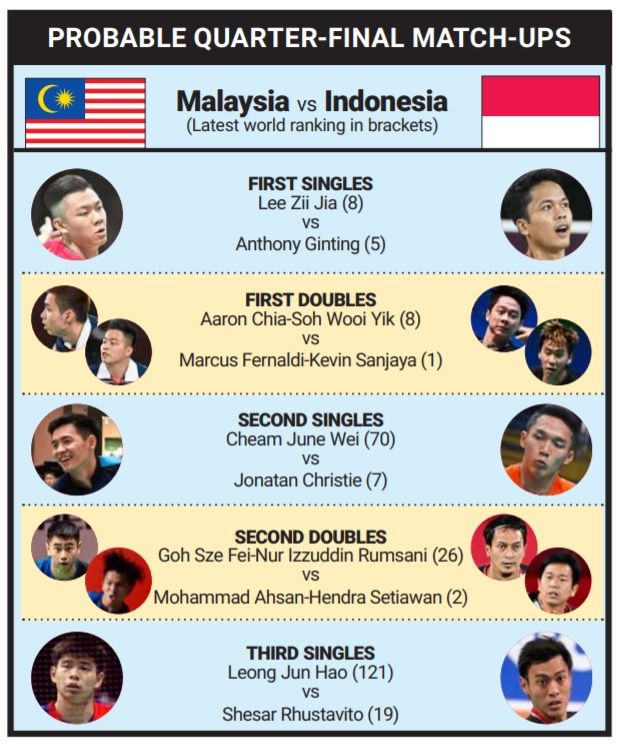 Malaysia may reduce dependence on Zii Jia at mixed team championship
Confidence is key for Pearly-Thinaah in bid to regain best form
Wasteful Tze Yong pays the price as Angus gets his revenge
Rexy: Hon Jian could be best fit for Sze Fei
Chong Wei to be part of Technical Advisory Panel at ABM
Liek Hou may still be in the running for 2028 Paralympics gold
First real test awaits Tze Yong in quarter-finals
Vountus quits BAM to broaden his horizons in Australia
Rexy: Wei Chong-Kai Wun must change attitude in Olympics quest
Jones not too worried over Aaron-Wooi Yik’s dry spell