PETALING JAYA: World No. 1 Yuki Fukushima-Sayaka Hirota may have failed to defend the women’s doubles gold for Japan at the Tokyo Olympics recently.

But they have certainly won the hearts of badminton fans worldwide with their valiant display to reach the quarter-finals despite Hirota playing with a torn right anterior cruciate ligament (ACL).

Hirota was reportedly injured during training on June 18 and did not train for two weeks. She opted to defer her treatment so that she could compete in the home Olympics.

Fukushima took to Instagram to share an update on Hirota with a photo of her visiting her partner at the hospital.

Hirota appeared to be in good spirits.

Hirota is expected to be sidelined until the year end, dashing the pair’s hopes of trying to break their World Championships jinx after finishing runners-up in the last three editions.

The manner in which they defied the odds at the recent Olympics had left many fans in awe.

Supported with heavy knee braces, Hirota and Fukushima soldiered on to make it out of a very tough Group A that comprised eventual winners Greysia Polii-Apriyani Rahayu of Indonesia, Britain’s Lauren Smith-Chloe Birch as well as Malaysia’s Chow Mei Kuan-Lee Meng Yean.

Finishing as group runners-up proved costly as they were pitted against world No. 2 Chen Qingchen-Jia Yifan of China in the last eight.

The two tightly-contested group matches certainly took its toll on the Japanese, especially Hirota, as they could not withstand another prolonged battle. 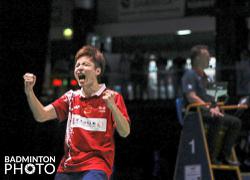