PETALING JAYA: With the lack of tournament opportunities, back-up shuttler Ng Tze Yong knows the importance of making the most of every chance he can get to impress the selectors for any national call-up.

And the 20-year-old hopes he has scored some early impression marks after winning the Polish International Challenge on Sunday.

Tze Yong will be determined to fight for his place in the team, especially for the postponed Thomas Cup Finals in Denmark from Oct 9-17 and Vietnam SEA Games (Nov 21-Dec 2).

Despite winning the BAM Invitational Championships, Tze Yong was pipped by 21-year-old Leong Jun Hao for the Thomas Cup selection last October as the latter was a preferred option to make up the four-man singles line-up comprising Lee Zii Jia, Liew Daren and Cheam June Wei.

The Finals, however, did not take place and was postponed to this year.

Tze Yong can expect to face a similar situation where he will most likely have to slug it out with Jun Hao, Aidil Sholeh Ali Sadikin and Lim Chong King, as well as independents Daren and Soong Joo Ven for the two remaining berths.

“Hopefully, it will help, ” said Tze Yong, when asked if he thinks his victory in Poland would increase his hopes for a possible Thomas Cup call-up.

“But it’s definitely still too early to say at this juncture. All I can do is to give my very best in every tournament I get in, and bring back good results. The rest is beyond my control.

“The win in Poland is surely a good start. But I still feel I could have done a lot better in terms of performance and I’m looking to work on it and head to the next tournament as a better player.

“I’m not quite sure how many more tournaments I will be able to play next, but the modest target for now is try to break into the top 50 first.”

Tze Yong’s feat in Poland had put him a step ahead of teammates Jun Hao, Aidil and Chong King in the early stages.

Besides the Thomas Cup Finals, the SEA Games will be another major event that Tze Yong has a shot at making his debut.

This comes after the Badminton Association of Malaysia (BAM) announced last week after a meeting with the Olympic Council of Malaysia (OCM) selection committee that they plan to send back-up shuttlers to defend the three golds won in the Philippines in 2019.

While as many as four men’s singles players will be named for the biennial Games, only the best two are eligible for the individual event.

Those who get picked have a tough task at hand – to defend the gold won by Zii Jia. 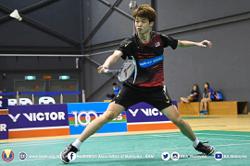