End of the road: Chan Peng Soon and Goh Liu Ying react during their quarter-final match in the Thailand Open yesterday. — www.badmintonphoto.com

PETALING JAYA: Unheralded pair Hoo Pang Ron-Cheah Yee See pulled off the biggest surprise of the day to reach the semi-finals of the mixed doubles in the Toyota Thailand Open.

The world No. 35 brought out their A-game to stun sixth seeds and world No. 9 Hafiz Faizal-Gloria Emanuelle of Indonesia 12-21,21-19,21-19 in a 68-minute quarter-final battle at the Impact Arena in Bangkok yesterday.

It was their first win over a top 10 pair.

The fourth-ranked duo will take on another fourth seeds Seo Seung-jae-Chae Yujung for a place in the final. The Koreans defeated Thailand’s Supak Jomkoh-Supissara Paewsampran 24-22,21-18.

While Pang Ron-Yee See were jumping for joy, it was the end of the road for the country’s top pair and 2016 Rio Olympic Games silver medallists Chan Peng Soon-Goh Liu Ying.

They lost 21-18,22-24,20-22 in a neck-to-neck thriller to unseeded India’s Satwiksairaj Rankireddy-Ashwini Ponnappa in a match that lasted for one hour and 15 minutes.

Pang Ron-Yee See are buoyed by their stunning win.

“Actually, I did not do well in the first match. During the interval, our coaches and Yee See kept motivating me.

“And slowly I regained my composure and was more focused in the game, ” said the 22-year-old Pang Ron.

“I struggled because I could not cope with the drift in the stadium... it took a while to adapt.

“Fortunately, I was more solid as the game progressed. The win against the Indonesians is the biggest achievement in our career.”

The duo, who only teamed up in the middle of 2018, did well the next year when they won three smaller-level tournaments – Hyderabad Open, India and Bangladesh International Challenge.

“This win will surely boost our confidence and we hope to maintain our performance. It will be tough against the Koreans but we want to show what we have.”

The 25-year-old Yee See said she had waited a long time for this breakthrough.

“Pang Ron and I are still learning to be more consistent and hopefully, we’ll be able to perform even better tomorrow.”

“It was so close but we are the ones who ended up losing our focus, ” said Peng Soon.

It was Peng Soon-Liu Ying’s third defeat to the Indian pair. Ironically, they also lost to the same pair in the 2019 Toyota Thailand Open.

The Indians will take on Thai top seeds Dechapol Puavanukroh-Sapsiree Taerattanachai in the last four. 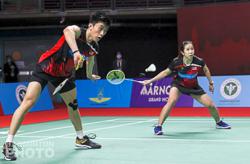