‘Dane was my bane’

PETALING JAYA: Former world No. 1 Lee Chong Wei has paid tribute to Jan O Jorgensen of Denmark for his fighting spirit during their encounters over the last decade.

The 32-year-old Jorgensen, who was once ranked second in 2015, is playing his final tournament at the ongoing Denmark Open in Odense.

He will be ending a 12-year colourful career and his retirement will see Denmark lose another top player as doubles stars Mathias Boe and Carsten Mogensen had earlier quit. Lee Chong Wei with Jan after their semifinals match of the Maybank Malaysia Open in Bukit Jalil on Jan 18, 2014. - FAIHAN GHANI/The StarJorgensen has only beaten Chong Wei once in their 17 meetings but the Malaysian revealed that the Dane was never an easy opponent.

“I know that this is Jorgensen’s last tournament and I want to commend him for his contribution to the sport, ” said the 37-year-old Chong Wei, who retired last year.

“He is quite different from any other European players. I don’t know how he does it but he is able to narrow huge leads by making unexpected comebacks.

“He dives all over the court, pulls off unbelievable shots and most importantly never gives up.

“I remember in one Denmark Open, I was leading by a huge margin but he caught up and almost beat me.

“He has taught me to be always be cautious. I do not take him or any other opponents lightly when I’m in the lead.”

Chong Wei however said that if not for Jorgensen’s injury woes, the Dane could have made life more difficult for him, China’s Lin Dan and a host of other top players.

Jorgensen is one of the few players who have beaten Lin Dan more than once. Out of nine meetings, the Dane has won seven including a walkover at the 2014 Denmark Open.

“Injury is a players’ worst enemy and unfortunately, Jorgensen has been floored by it several times, ” said Chong Wei.

“The toughest is to make a comeback after recovering from an injury and imagine going through the cycle a few times. So, I understand his situation.

“I wish him all the best and also in his last outing at home, ” added Chong Wei, who has been following the matches via YouTube.

If he beats Toma Junior Popov of France in the second round, he is set to meet compatriot and third seed Anders Antonsen in the last eight.

“Huge memories here. First one in 2005, reaching second round in Aarhus I think, when I was very young, ” said Jorgensen in the Badminton World Federation website.

“Three years later semi-finals, beating Peter Gade (Christensen) here and winning next year (2010), my first major title, so this is one of the big places for me and I’m just proud to have won it, and to end it here is special.” 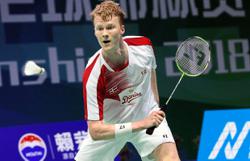