Feels good to be back “home”, says Khim Wah

PETALING JAYA: Former doubles shuttler Lim Khim Wah has returned “home” after five years – and he is just loving it.

“I’ve started training and it has been good. We however, had to stop temporarily, following the break due to Covid-19, ” said Khim Wah.

Khim Wah, who was once ranked 11th in the world with Goh V Shem, is thankful to coaching director Wong Choong Hann and Eei Hui for giving him a chance to serve the nation again.

“I left the national team in 2015 and became an independent player – but it feels good to be back. BAM is like home to me, ” said Khim Wah.

Khim Wah began his junior days with the national body and his best result was winning the Malaysian Open with V Shem in 2014.

After leaving the national set-up, he played as an independent player with different players before finally joining Tan Boon Heong Academy last year.

“I still try to play competitive badminton but mainly, I coach under TBH academy at their Puchong branch.”

On the standard of the mixed doubles players, Khim Wah said he was impressed.

“I’ve played in the mixed doubles before too. So, I know the quality shown by the current players. More importantly, I see the determination in each one of them, ” said Khim Wah, who won the 2007 world junior mixed doubles title with Ng Hui Lin.

“Hopefully, I’ll able to pass on my knowledge to the current batch and assist in whatever way I can to strengthen the team, ” he added. 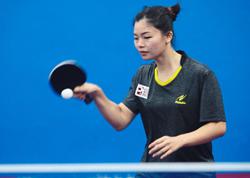 Ho Yin is top gun in singles, but she’s back-pedalling