Towering German won’t be looking down on Chong Wei

Germany's 7-footer Dieter Domke will take on Malaysia's Lee Chong Wei in the second round of the Badminton World Championships in Copenhagen on Wednesday. - Filepic

GERMAN Dieter Domke’s game plan against world No. 1 Lee Chong Wei in the men’s singles second round at the World Championships on Wednesday is quite simple – to just survive!

On Monday, the 27-year-old towering German pulled off a surprise when he sent reigning Commonwealth Games champion P. Kashyap of India packing 26-24, 13-21, 21-18 at the Ballerup Super Arena.

He admitted that it would be tough against Chong Wei, who got off to a brilliant start in the world meet with a stunning 21-11, 21-12 win over youngster Lee Dong-keun of South Korea.

After a two-month layoff to recover from a thigh injury, Chong Wei was hardly bothered by it as he went on the offensive from the start.

Seven-footer Domke has no intention of looking down on Chong Wei – especially after losing in straight games to the Malaysian in the 2013 Sudirman Cup and 2009 World Championships in Hyderabad.

“Chong Wei and Lin Dan are the best players ever ... I’m just thrilled to have the opportunity to play against him,” said Domke.

“My game plan against him is ... to survive,” he laughed.

Chong Wei, while ecstatic with his opening victory over Dong-keun, does not plan to take his German opponent lightly.

“Every player hopes to make an impression in a big tournament like this. I’ve beaten him before but I will not brush him off as a non-threat,” said Chong Wei.

If Chong Wei wins, he is likely to meet Ireland’s Scott Evans in the third round on Thursday. 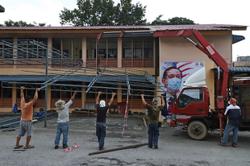