YOUNG sprinter Mohd Azeem Fahmi has apologised for his mistake in making a false start in the semi-finals of the 100m event.

The 18-year-old, through social media, also admitted that he was too upset to be able to control his emotions after his disqualification at the My Dinh National Stadium on Wednesday.

“First of all, I would like to apologise for my weakness in not being able to control my emotions upon disqualification.

“I was too frustrated with myself because of the false start,” said Azeem.

“I apologise to anyone who was affected by my emotional outburst.

“Insyallah (God willing), the blessings of your prayers will lead me towards more success in the future. Thank you Malaysia,” he said on Instagram.

Azeem, dubbed ‘’the Usain Bolt of Malaysia’’, was overcome by emotions after being disqualified due to the false start in the second semi-final heat.

National athletics head coach Manshahar Abdul Jalil noted that the explanation of the referee and technical officer, after checking the technical equipment report, proved that Azeem had indeed made a mistake.

He said Azeem’s reaction time was 0.058 seconds earlier before the starting pistol was fired and his feet were off the starting blocks during the pistol’s firing.

With another sprinter Mohd Arsyad Md Saat suffering a groin injury during the first semi-final heat and finishing the final in sixth place with a time of 10.69, Malaysia failed to defend the ‘Sprint King of South-East Asia’’ title.

Malaysia topped the blue-riband event in the previous two editions through Khairul Hafiz Jantan in 2017 in Kuala Lumpur and Mohd Haiqal Hanafi in Manila in 2019. — Bernama 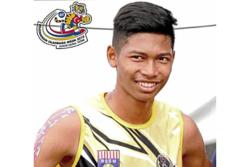