US athletics coach Miller ready to hit the ground running

KUALA LUMPUR: Coach Dwayne Miller (pic) has finally arrived and raring to chart the fortune of our track and field athletes.

The 55-year-old American, who has more than 30 years of experience, will be the Malaysian Athletics Federation’s (MAF) technical director for the next three years.

MAF president Datuk S.M. Muthu said that they are fortunate to have Miller’s services, who won the Nike Coach of the Year award from the USA Track and Field in 2008.

“Miller has produced world-class athletes, who have won medals at the World Championships and also at the Olympics.

“He will initially be under probation for six months. We are confident with his vast experience, he will help lift the standard of athletics in the country, ” said Muthu.

Miller, a former sprinter and long jumper, said athletes are born talented and the coaches job is to guide them to perform to the best of their ability.

“It is a gift from God as not everyone can became a top-class athlete, ” said Miller, who met a few athletes at the National Sports Council (NSC) Training Track in Bukit Jalil yesterday.

“I’m surprised that Malaysia have a lot of talented athletes and one of them is triple jumper Mohd Hakimi (Ismail). I believe he has the potential to hit 17m mark in competitions.

“Hakimi needs proper guidance to achieve this. He also has the potential to qualify for next year’s Olympics, ” added Miller, who is also impressed with high jumper Lee Hup Wei.

Hup Wei competed at the recent World Championships as a wild card and did exceptionally well to qualify for the final.

“He finished a creditable eighth in the world meet and I’m certain he will feature at the Tokyo Olympics, ” said Miller, who worked as a coach in Saudi Arabia from 2013 to 2015 and in Qatar from 2015 to 2017.

Miller also trained national sprinters Jonathan Nyepa and Zaidatul Husniah Zulkifli, who were based in the United States from February to August this year. 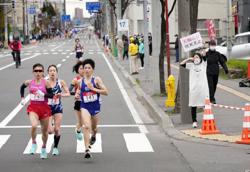