PETALING JAYA: The National Archery Association of Malaysia’s (NAAM) decision to enter an inexperienced women’s side for the Tokyo Olympics’ Final Qualification Tournament (FQT) had almost yielded a pleasant surprise.

The 19-year-old Nur Ain Ayuni Fozi (pic), competing in only her first international tournament at senior level, came close to securing a dream Olympic debut when she fought her way to the last 16 in the women’s individual qualifier at the Charlety Stadium in Paris yesterday. 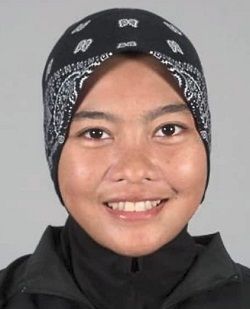 She was just two steps away from a top-four finish that could not only secure a quota for herself, but also a mixed team berth for Malaysia.

A nation with at least one qualifier in both the male and female categories is eligible to enter the mixed team event, which will be contested for the first time in Tokyo.

Malaysia have already confirmed one spot in the men’s individual through Khairul Anuar Mohamed, who grabbed his ticket by emerging runner-up at the 2019 World Championships.

But Nur Ain certainly deserved a pat on the back for her impressive display.

After overcoming Pia Elizabeth Angela Bidaure of the Philippines 6-2 in the opening round, she went on to beat former world No. 8 Khatuna Narimanidze of Georgia 7-3.

The challenge of two other Malaysian rookies – Nurul Azreena Fazil and Syaqiera Mashayikh – ended in the second and first round respectively.

Nurul was beaten 2-6 by Anna Tobolewska of Poland while Syaqiera went down 2-6 to Valentine De Giuli of Switzerland.

Nur Ain, Nurul and Syaqiera had also featured in the team qualifier on Sunday, but they lost 2-6 to Brazil in the first round.

The last time Malaysia were represented in the women’s event was in London 2012 when Nurul Syafiqah Hashim qualified for the individual event.