Sombre mood in training without Haziq 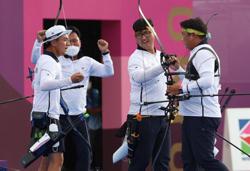 PETALING JAYA: Haziq Kamaruddin used to be the livewire in the national training camp.

But in the absence of Haziq who passed away due to a heart issue last Friday, the national team led by Olympian Khairul Anuar Mohamed resumed their quarantined-approach training in Bukit Jalil in a sombre mood yesterday.

Most of them trained at different times but they could not hide their sadness as they were without their bubbly teammate.

National coach Lee Jae-hyung admitted that he has a big task to get the rest of the team all motivated again. The squad are already down having to cope with the challenges in training that comes with the Covid-19 pandemic.

“It’s not going to be easy... I guess it will take a few days for everyone to settle down after the sudden death of Haziq, ” said Jae-hyung.

“Haziq was a good communicator, in fact, he used to crack jokes with everyone during training. His presence will be missed for sure.

“We had planned to start training on Sunday but after the shocking news, we decided to defer it by a day. I had to start the training as we have a few events coming up.”

The team will participate in the Asia Grand Prix in South Korea from June 6-12, the Olympics qualifying tournament in Paris from June 19-21 and the World Cup at the same venue from June 22-28.

The Olympics qualifier is the last stop for Malaysia to make the cut for the team event. Currently, only Khairul, who has been named as the nation’s flag bearer at the Games, has booked his ticket for the individual event.

Jae-hyun had initially named four players – Khairul, Haziq, Zarif Syahiir Zolkepeli and Mohd Akmal Nor Hasrin for all the events.

Only three however, can compete in the Olympics qualifiers and Jae-hyung had planned to name the three on May 28, the last day to submit the entry by name.

“It’s the last qualifiers for us to qualify in the team event. We will finalise the team, ” he said.

It all points to Zarif being named as Haziq’s replacement. At the last Olympics in Rio, Malaysia’s team members were Khairul, Haziq and Akmal.