THE mother of all data breaches in Malaysia has happened! Data containing the information of 22.5 million Malaysians born between 1940 and 2004 has been leaked.

The data was ostensibly stolen from the National Registration Department (NRD).

Recently, Home Minister Datuk Seri Hamzah Zainuddin was quoted as saying that the data leak was not from the National Registration Department (NRD).

He said there was a mechanism in place, which could prove that the leaked information did not come from the department.

If that is so, where was the source of the leak? This question must not be left unanswered.

The minister explained that it was from several agencies, which were given some leeway “for them to obtain information from us.”

This is serious. The NRD is the depository and custodian of the personal information of all citizens, and if any leak occurs, shouldn’t it be held accountable?

When the department shares information with other agencies, as explained by the minister, what safeguards are put in place to ensure confidentiality? And are there any penalties for non-compliance?

The public want quick answers and immediate action to get to the bottom of this leak and act against those responsible.

The public’s greatest fear is that the leaked data would be sold on the dark web to scammers who have increasingly been taking many people for a joyless ride.

Scamming is today very rampant and many, including educated individuals, have been cheated.

It is said that many are anticipating an increase in fraudulent online transactions as a result of this breach.

“With these data, scammers can convince people that they are calling from the banks, courts, police and authorities,” noted a social media commentator.

So, the Home Ministry must concentrate on plugging the leak and issuing appropriate warnings to the public rather than finding reasons to absolve itself of any responsibility.

It should cease pointing fingers. Instead, it should conduct a thorough and independent investigation, and make the findings public in order to retain a measure of public confidence and also punish the data thieves. 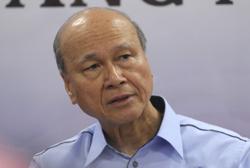