Group photo of MCA Youth Wangsa Maju chief Chong (centre) with other members and sponsors before distributing the essentials.

On July 19, MCA Youth Wangsa Maju received donations in kind from the Malaysia JiangSu Entrepreneurs Business Association, China Malaysia Benevolence Figures Group, Tanco Holdings Berhad, and others. With sponsorship extended by these multiple organisations, the supplies were distributed to 200 needy families in the district. Through the combined strength of private businesses, it is hoped that this endeavour will be able to attract others to likewise donate for the benefit of the B40 group who have been hardest hit by Covid-19 pandemic.

On that day, I led MCA Youth Wangsa Maju to deliver the essentials to the afore-mentioned destitute families located at Flat Sri Langkawi, Flat Setapak Indah Jaya and Seksyen 2 in Wangsa Maju whose incomes have severely plummeted. These goods should be able to support the beneficiary residents for at least two weeks.

This initiative is the first time that MCA Youth Wangsa Maju has collaborated with private companies to donate supplies to needy families. Through local leaders, MCA Youth Wangsa Maju identified the families affected by the outbreak in advance. This is to ensure that the recipients are genuine cases who really require aid.

This pandemic has left the most profound impact on the history of humanity. Many countries across the world, including our nation, have been deeply affected. The pandemic and movement control orders have caused the drastic reduction in the incomes and livelihoods of many families. In serious cases, job losses left families distressed over food shortages.

Particularly in the Klang Valley, although the average income of residents is considered to be higher, household expenditure is also relatively higher in tandem compared to other parts of the country. Thus, with the sharp drop in income, the savings which many families rely on will not last long. The economy has impacted Klang Valley residents more severely those in other regions.

According to a survey conducted by Bank Negara in August 2020, up to 84% of Malaysians do not have enough savings to support living expenses for three to six months during emergencies such as unemployment. Meanwhile, the savings of 75% of Malaysians are even less than RM1,000. This situation is very worrisome as unemployment during this contagion will leave a massive impact on these families.

It is common knowledge that the daily expenses of residents in the Klang Valley is higher than those in other places. Therefore, there is hardly any funds remaining or none at all that can be used and saved after deducting the necessary expenditures. Therefore, people living in capital and urban cities are the first to bear the brunt of this pandemic.

For the moment, the only way out of all these restrictions and consequent difficulties, is for the masses throughout our whole country to be vaccinated as quickly as possible. It is only when herd immunity is achieved, the sooner our country’s economy may recover. As Malaysia’s daily vaccination rate exceeds 400,000 doses currently, the government must plan a blueprint for national economic recovery as soon as possible, based on this speed, and especially for micro businesses and SMEs who form the bulk of the economy but are on the verge of collapsing or have already suffered business closure.

SMEs are the locomotives of the national economy. Once they encounter a wave of collapse, our country would also fall into an irreversible predicament. This in turn, will erode the confidence of foreign investment into our nation’s economy and directly will cause thousands of families to lose their sources of income.

We believe that the government's disbursement of aid to the affected households and businesses is only a temporary measure. There is greater urgency to draw up a recovery plan to revitalise the nation’s economy so that the rakyat may swiftly return to the old normal post-pandemic.

MCA Wangsa Maju will also establish a relief team immediately to deliver relief supplies to families facing food shortages. Members of the public who come across any family in urgent need for assistance in this district may contact MCA Youth Wangsa Maju Relief Team via SMS or WhatsApp 010-2829781. 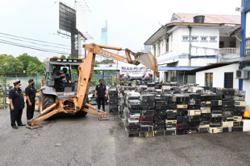