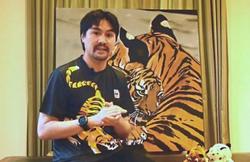 THE death of one Malayan tiger always hits hard. But when many die, potentially causing the extinction of this majestic species, it is a national crisis.

To date, we have fewer than 200 individuals in the wild, but most signs show that the real number is smaller.

To get a sense of the severity, losing one tiger is akin to losing 160,000 people in a nation of 32 million. Would we sit still if genocide of this dimension happens to our citizens?

Our call to save the Malayan tiger may sound like a broken record, but this is the reality and the situation has never been more urgent.

To save the tiger, we mean saving the species in its natural habitat. As an apex predator, the tiger requires a vast natural habitat. Our forests in the Central Forest Spine cover approximately five million hectares.

Under the Biodiversity Protection and Patrolling Programme, the Department of Wildlife and National Parks (Perhilitan) with the support of other agencies and NGOs have deployed more than 600 forest rangers to patrol the forest since last year.

The government allocated RM32mil to support this initiative in 2021, and corporate Malaysia stepped in to provide funds to hire rangers. Another government initiative,

Unfortunately, this number of rangers is not enough. Based on countries that have successfully tackled their loss of tigers, we need at least one person to patrol every 1,000ha. So, to cover five million hectares of forests, we need at least 5,000 patrolling personnel.

The WCU would also facilitate greater integration in inter-agency, including Customs and Immigration, enforcement work across the country.

Along the chain of supply and demand, the WCU could investigate the link all the way to the masterminds pulling the strings. Other tiger range countries such as Nepal and Thailand have established such units, and these have achieved a good measure of success.

A major factor behind Nepal’s success in doubling its tiger numbers was the establishment of a National Tiger Conservation Committee chaired by the prime minister. Similarly in India, Project Tiger was established by the then prime minister, Indira Ghandi, in the 1970s.

We therefore call for the establishment of a National Tiger Committee to be chaired by the Prime Minister. Efforts in tiger conservation across the states require an integrated approach that involves federal and state agencies and the private sector. Having the Prime Minister chair this committee would bring all these stakeholders together on a singular mission to protect the symbol of our country.

In conserving tigers, we also conserve some of the world’s richest ecosystems, including habitats of other endangered flagship species.

It takes a nation to save the tiger. It is high time to bare our fangs and restore the roar of our Malayan tiger.