Campaign needs to put in lots of tender loving care 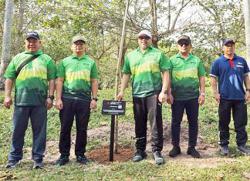 I REFER to the Star Lifestyle article “Not out of the woods” (The Star, June 22) highlighting the Malaysian government’s campaign to plant 100 million trees in the next five years to address climate change and reverse biodiversity loss.

I have no doubt that 100 million trees or saplings will be planted, but the key question is how many of these saplings will grow to be mature trees, especially those on rough terrain and in remote areas, to meet the objective of the campaign.

Many do not realise that the easiest part of any tree-planting project is the actual planting of the saplings. There is so much enthusiasm, interest and hype initially especially when very, very important persons (VVIP) are involved. Once the tree-planting ceremonies are over, follow-up measures are often forgotten, and it will then be left to nature to take care of the saplings. And the results are predictable!

One doesn’t need to be a rocket scientist to know that it is important to take care of the saplings so that they can grow into strong and healthy trees.

This 100 Million Tree-Planting Campaign will need people to take care of the saplings during their early years and, more importantly, adequate (financial) resources in the form of yearly allocations.

Full-time tree caregivers are needed to tend to the saplings, including watering and giving them fertiliser when required. Saplings and young trees can be easily damaged or even swept away during heavy rain, especially if they are planted on steep slopes.

The human factor (especially the top leadership) will be vital in ensuring that the saplings are given tender loving care as they grow. Without this, I can confidently predict that the tree-planting campaign will fail to achieve the desired target.

Even if serious attention is given to the upkeep of the trees during the early days of this campaign, we should consider ourselves

lucky if only one-third of the targeted 100 million saplings grow up to be mature trees. According to botanist Dr Francis Ng, raising one million trees to a mature height will require about three million seeds and saplings, allowing for mortalities. This scenario assumes that there is periodic monitoring and maintenance.

In 2009, a similar project was launched in Bukit Kiara involving the planting of 100,000 saplings. The response was overwhelming at first. VVIPs from the corporate sector gave their full support. The then Yang di-Pertuan Agong Sultan Mizan Zainal Abidin and Prime Minister Tun Abdullah Ahmad Badawi were invited to plant a few trees.

More than 12 years have passed and I dare say that none of the 100,000 trees survived. Without any proper maintenance and given our harsh weather, the saplings were easily swept away down the slopes of Bukit Kiara after major thunderstorms.

The enthusiasm and interest subsequently waned, and with no maintenance personnel around, the trees died a natural death.

To reiterate, no tree-planting programme will be successful without proper maintenance by full-time personnel on the ground.

I urge nature-loving Malaysians to monitor the progress of this campaign by reporting to the authorities should there be neglect in the upkeep of the saplings, especially those planted in hilly and remote areas.

Put the soul back in academia
Seeking help to claim for cash payout
Responsibility of producers in circular economy
Show fairness to the Health director-general
On the right track, and the numbers prove it
Mettle in mental welfare
From regulatory incentives to fiscal incentives
This is how ignorant and irresponsible some Malaysians are
Showing of hypocrisy at its finest
The pandemic’s collateral damage