Heed the cry of the tiger 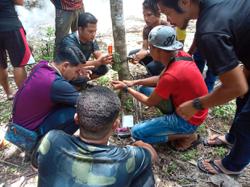 AS I roam the forest hungry and limping, I hear that humans in my country and around the world are living in fear. I find this strange because humans tend to think they are the masters of the world and nothing can destroy them.

But I do sympathise with them because I know what it is like to live with death staring at you. We also constantly face threats to our survival, such as snares placed by ruthless poachers that have taken the life or limbs of many of my fellow jungle dwellers.

I also know that humans no longer fear a majestic carnivore like me. In the good old days, according to my dad, people, especially villagers and the plantation folk, feared us, the Malayan tiger, the most.

But now, the fear is not of tigers or trampling elephants, but something they can’t see with their naked eyes. It’s not black magic or makhluk halus! It’s a coronavirus believed by humans to have moved into their midst due to their own mischief.

Humans have abused Mother Earth for centuries, and nature is fast reaching the tipping point. This global pandemic is just one of the results of such reckless actions!

Life has become really difficult for me and my tribe. Being a Malayan tiger, we are celebrated; we have legendary aura as king of the Malayan rain forest; we decorate the nation’s coat of arms, and the national football team use us as their name and symbol.

Despite being celebrated as a national symbol, sadly my species is in decline.

These days, I hardly bump into another male tiger. There are no more fights for territory, and even finding a female beauty to bear my progeny is tough. I would be surprised if our number exceeds 200 individuals in the Malay peninsula now.

At the Global Tiger Summit in 2010, tiger range countries including Malaysia committed to doubling their tiger numbers by 2022.

The government has come up with a plan – the National Tiger Conservation Action Plan (NTCAP) – to save my species and the larger ecosystem via the Central Forest Spine Master Plan. These plans are excellent and well-crafted by experts and policy makers, but implementing them is difficult due to lack of resources, especially money. It is even more challenging now as the government has a pandemic to fight.

In this regard, I sincerely hope non-government stakeholders, especially from the business and corporate world, would step in to assist. Saving my species, the apex predator, will not only save us but also the wider biodiversity and, most importantly, humans.

We need a whole-of-nation-approach to address many environmental issues, from biodiversity loss to climate change. I strongly believe that those who have benefited most from activities that have exploited forested areas should now contribute in a meaningful way. You know who you are.

I know some of you have contributed, but the funding is inadequate to make real changes in augmenting tiger and biodiversity conservation.

The corporate sector must also adopt Environmental, Social and Corporate Governance (ESG) in their business activity. They can also undertake conservation activities and support green growth to build back better as we wade through this pandemic.

Today, in conjunction with International Day for Biological Diversity and its theme, “We are part of the solution”, I call out with a roar for the business sector to play their role and save not only my tribe, the Malayan tiger, but also humans.