INDIA does not have the best public health care system in the world. Almost everyone in the world knows it. But India does have an increasing number of billionaires, as confirmed by James Crabtree's book The Indian Rajs.

In his book, one can see that surrounding the tall and stellar residence of the Mukesh Ambani in Mumbai are slums. Areas such as these are lethal vectors of transmission, even though Covid-19 really does not distinguish between the rich and poor.

The rich and famous internationally who were infected with Covid-19 in 2020 alone is a long list – Tom Hanks and his wife Rita; UK Prime Minister Boris Johnson, Prince Charles II, former US president Donald Trump, his wife and his youngest son Barron; former secretary-general of the North Atlantic Treaty Organization (Nato) Javier Solana as well as other actors Idris Alba, Antonio Banderas, Olga Kurleyanko and more.

In India, even Bollywood legends such as Amitabh Bachan were not spared from infection, nor was his son Abishek, famous daughter-in-law Aishwarya Rai and her daughter. This all happened in the second week of July 2020.

Prime Minister Nadendra Modi should have understood the pervasive nature of Covid-19.

Yet, in February 2021 – with Covid-19 around for almost 14 months since the first outbreak in Wuhan, China, in December 2019 – Modi declared that India had successfully contained Covid-19.

This was followed by the policy of loosening lockdowns, allowing huge social gatherings and allowing Indians of all ages to ignore the basic need to wear a mask, maintain social distancing and washing of their hands. The protocol prescribed by the World Health Organization (WHO) to "test, trace and treat" (3T) were ignored too.

On May 8, India's health ministry reported 4,187 fatalities over the past 24 hours, taking the overall death toll close to 240,000. The Institute for Health Metrics and Evaluation estimates that India will see one million Covid-19 deaths by August 2021.

Indeed, cases rose by 401,078 on Saturday (May 8), bringing the total since the start of the pandemic to 21.9 million. Since the 3Ts of India are weak, it goes without saying that medical experts say the real numbers of Covid-19 cases and fatalities are likely to be far higher than official tallies.

People in India's most populous state Uttar Pradesh are fighting not just a raging pandemic but also a prickly Hindu nationalist local government that many say is in denial. A full cylinder of oxygen is US$452 and it barely lasts eight hours before it has to be refilled. Seriously, how many Indians afflicted by Covid-19 can afford this?

State authorities, headed by a monk, Yogi Adityanath, 48, touted by some as Modi's successor, insist there is no shortage and took a dim view of those "spreading fear".

Meanwhile, there is still no national lockdown in India and barely 3% of India population is vaccinated.

Although the 2-Deoxy-2 drug is in use, it is a palliative treatment to reduce the need for immediate oxygen and not a Covid-19 vaccine. The surge in cases means there is not enough of it to go round anyway.

The Serum Institute of India – the world's biggest vaccine maker which is capable of producing one billion doses – is struggling to produce and distribute enough doses to stem the wave of Covid-19.

To be sure, the country has administered more than 167 million vaccine doses. But its rate of inoculation has fallen in recent days and only around 2% of its 1.4 billion people have received the two doses needed to be fully immunised.

Dr Rais Hussin is president and CEO of Emir Research, an independent think tank focused on strategic policy recommendations based on rigorous research. 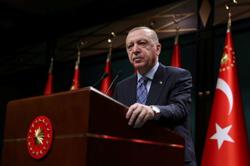