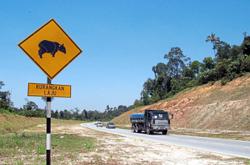 Photo provided by the writer.

THE photo of a tapir stuck in the middle of heavy traffic on March 6 vividly demonstrates the dire situation of wildlife when forests are fragmented by roads and other man-made structures.

In order to find food and potential mates, these animals need to move between the remaining patches of forest. Fast-moving traffic and inadequate crossing points mean that animals such as tapirs too often end up as roadkill. One obvious solution is for wildlife crossings coupled with fencing to be constructed to allow safe movement of these animals.

The Persiaran Mokhtar Dahari (B49) highway cuts through the middle of the Bukit Cherakah Forest Reserve (BCFR). More than 12 tapirs have been killed while trying to cross between the northern and southern forests blocks since the highway was opened in 2003. In the interest of preventing further accidents, it is now critical for the Public Works Department to work with the Department of Wildlife and National Parks (Perhilitan) to build wildlife crossings on this highway to provide a safe passage for the tapir and other wildlife. In the interim, it is crucial to install speed bumps or “rumble strips” to slow down traffic along the stretch of the highway passing through the forest reserve.

We call on the Public Works Department to immediately install speed bumps on the stretch of Persiaran Mokhtar Dahari that cuts through the Bukit Cherakah Forest Reserve. Speed bumps are critical to slow down traffic and prevent further tapir roadkill on this stretch of the highway.

Fencing to either contain or funnel possible movements into areas where traffic has been drastically slowed through speed bumps could also be considered. Such short-term steps are urgently needed while other longer-term measures, such as the construction of wildlife crossings, could be discussed and planned for.

Wildlife such as tapirs are a crucial part of the ecology of the Bukit Cherakah Forest Reserve.

Large mammals such as tapirs play an important role in the dispersal of large seeds such as durian and cempedak. These seeds cannot be dispersed by other animals or birds, including hornbills.

Apart from elephants and rhinoceros, the tapir is the most important disperser of these large seeds. Tapirs are thus crucial for the health of many forest trees.

Every attempt must be made to conserve the tapir in the Bukit Cherakah Forest Reserve. Constructing wildlife crossings across the B49 highway is a critical component of that process.

We strongly urge the Selangor state government to ensure that the forest on both sides of the highway is preserved. There is no point in suggesting for wildlife crossings to be considered if the existing forest is further reduced through deforestation for development projects. All efforts must be made to safeguard the Bukit Cherakah Forest Reserve from any further exploitations.

This must be made with the intention of saving the last remaining green lung for Shah Alam that not only serves as a habitat for a large mammal but also provides other ecosystem services to the rakyat of Selangor.

(This letter is endorsed by 45 Residents’ Associations, Community Based Organisations and Civil Society Organisations representing different communities and sectors as well as several individuals.)

Can Covid-19 vaccines overcome pandemic fatigue?
An overlooked toolbox in Covid-19 pandemic management
Modi's crimes of vanity in India's Covid-19 insanity
Universal vaccination the only way to end pandemic
Inspired to speak up against injustice
Rules also needed for proper disposal of used face mask
Be prepared for use of body cameras
Turning misfortune into an advantageous situation for people
Breaking peace into pieces: the shards and shrapnel can only hurt Israel
Social effects of Covid-19