OCT 25,2020, is truly a historic day for humanity. On this day, Honduras became the 50th country to ratify the Treaty on the Prohibition of Nuclear Weapons (TPNW), thus achieving the threshold for it to enter into force globally in 90 days. Thus, the treaty will enter into force in late January next year. Malaysia itself had just ratified the treaty on Sept 30.

Up until now, nuclear weapons were the only weapons of mass destruction that had not been made illegal under international law. It now joins the ranks of chemical weapons, biological weapons, land mines, cluster munitions and the like to become weapons outlawed by humanity.

Humankind as a whole has entered a new age of peace, security and happiness in spite of the challenges posed by the ongoing Covid-19 pandemic. We have also fulfilled the wishes of the hibakusha, the victims of the atomic bombing of Hiroshima and Nagasaki in Japan during WWII, that these demonic and destructive weapons are never again used on anyone. Never again will anyone have to undergo the suffering they have endured for 75 years.

Many leaders in various spheres have called for the outlawing of the most destructive weapons of all that have caused untold suffering not only to those in Hiroshima and Nagasaki in 1945 but also the victims of nuclear weapons testing, such as the people of the Marshall Islands. The development of nuclear weapons has also resulted in international tensions and caused billions of dollars to be spent in developing and maintaining them – money that can be put to better use, such as alleviating the effects of this pandemic.

It is not just political leaders but religious leaders of all faiths who have called for a ban on nuclear weapons. Pope Francis has called the use and possession of nuclear weapons “immoral” and called for the Catholic Church’s opposition to nuclear weapons to be included into its catechism (religious instruction). Japanese Buddhist leader Daisaku Ikeda said: “I would like to strongly stress the importance of ensuring that it (the TPNW) enters into force within this year, which marks the 75th anniversary of the atomic bombings of Hiroshima and Nagasaki. This would make 2020 the year that humankind finally begins to leave the nuclear age behind us.”

This is but a beginning, the start of a hope-filled tomorrow. It has been reported that the current US administration has written to nations that have ratified or are intending to ratify the TPNW to retract their support for this historic treaty. Thankfully, the world’s nations are standing firm against this form of “persuasion”.

To the leaders of states that have nuclear weapons: You must realise that you are now in possession of illegal weapons. Though you have chosen not to support this treaty, you cannot possibly ignore the voices of the rest of the world who have proclaimed a resounding NO! to nuclear weapons.

We call upon the leaders of these nations to enter into negotiations in good faith to disarm their nuclear arsenals at the earliest possible opportunity.

I would like to extend my warmest congratulations to all humanity, in particular to my compatriots here in Malaysia, who have worked tirelessly for the sake of peace and a world free from nuclear weapons. Though we are in a particularly trying period in the history of the world and our country, as long as we cherish the desire for peace and are solidly united, we can transform this great calamity into great happiness, just as we have done with nuclear weapons. 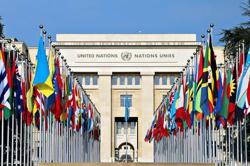 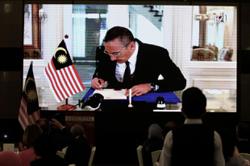