Means for Parliament to meet

I REFER to the report “No Parliament sitting” (The Star, March 31) on the government dismissing calls for an emergency sitting of Parliament to review the RM250bil economic stimulus package, as there was an immediate danger of the deadly Covid-19 pandemic.

But take a look at Canada. When Prime Minister Justin Trudeau announced on March 22 that his government had asked the Speaker of the House of Commons, the lower house of Parliament, to recall the House on an emergency basis, it was to pass legislation which would help Canadians cope with the impact of the Covid-19 outbreak.

The House, having been suspended on March 13 amid the Covid-19 concerns, duly reconvened two days later, on March 24. And how out of the ordinary it was.

Under the House’s Standing Order 26, a quorum of 20 members (including the Speaker) is required “to constitute a meeting of the House for the exercise of its powers.”

But putting political differences aside, leaders of the political parties in the House had no difficulty in agreeing that only about 30 members attend the special sitting.

This enabled the House to meet and observe social distancing in the august chamber at the same time.

The meeting was also made possible under Standing Order 28(3), which provides that when the House stands adjourned, it may be recalled by the Speaker, in consultation with the government, earlier than the date it was adjourned.

The process usually begins with a government request made in writing to the Speaker setting out the reasons why it is in the public interest to recall the House.

This is similar to Standing Order 11(3) of the Dewan Rakyat which reads:

“If, during an adjournment of the House, it is represented to Tuan Yang di-Pertua by the Prime Minister that the public interest requires that the House should meet at an earlier date than that to which the House was adjourned, Tuan Yang di-Pertua shall give notice thereof forthwith and the House shall meet at the time stated in such notice. The business set down for that day shall be appointed by the Prime Minister and notice thereof shall be circulated not later than the time of meeting.”

Although the House was suspended as soon as it reconvened, the deadlock between Trudeau’s minority government and the opposition was finally resolved with the House approving the stimulus legislation.

An emergency meeting of Parliament during the movement control order (MCO) can surely be done.

This can be permitted by the director-general of Health under Regulation 3(1)(e) of the Prevention and Control of Infectious Diseases (Measures Within the Infected Areas) Regulations 2020.

If the Cabinet, which numbers more than 30 ministers, continues to meet weekly, if not daily, why can’t the same number of MPs meet in the Dewan Rakyat?

If Canada can, so can Malaysia. 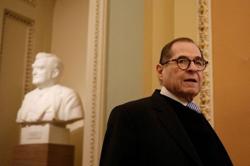 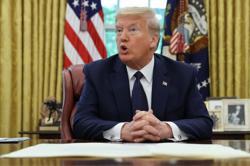 Trump, Macron agree G7 should be held in person and in near future - White House