Every patch of jungle is precious now

THE truth is we really don’t have to clear any more jungles; not in South-East Asia, not in the Amazon or anywhere else for that matter. We have cleared enough land for food and timber to last us for generations to come. On the other hand, the jungles (and all the life they support) need to be given a respite to heal and restore, now and not later.

A new documentary series, Our Planet, offers compelling suggestions on exactly how we can save our jungles. It reports that more than 75% of virgin jungles around the globe are gone by now due to human activity. It is apparent then that there is no scarcity of land as such. So instead of chopping down more trees, we must use the existing land more efficiently, which includes restoring or re-purposing degraded soils for replanting. It is also possible to help rain forests regenerate their ecosystems naturally, even if not in their original richness.

and foremost, have to commit to sustainable use of land and effectively shift their business models. In turn, the impetus for change ought to come from the players down the supply chain – the food manufacturers whose products end up in the hands of end consumers. Their membership in groups such as the Roundtable on Sustainable Palm Oil (RSPO) can be taken as a sign of their pledge to support sustainable deforestation-free practices at the source. Eventually, even the small farmers and producers would become open to adopting the new more sustainable operating procedures in their operations.

As individuals, we too have a role to play. For that, first of all, we need access to true information. The government, notwithstanding its protection of the palm oil industry for economic reasons, has to disclose all environmental data transparently, which it has failed to do till now.

Pressure group Klima Action Malaysia says the country retains a mere 18% of its virgin forests intact, in stark contrast to the official government figure of 50%. In Borneo, we lose a hundred orang utans every week. With dire statistics such as these revealed in the open, the civic movement toward climate action could grow stronger. This could in turn shift the cultural priorities of environmental indifference in many people who seem to be unable to care about the world beyond their own lifetime.

Of course, local action alone will not solve the climate problem; concerted global efforts are essential. However, we can start where we are, at home, by realising the immense wealth we possess in the biodiversity of jungles and by doing everything we can to protect them for the health of our planet and ourselves. 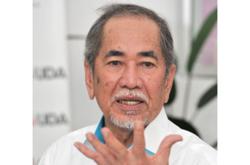