Tough road for the elderly to traverse

ALL pensioners and those of us who are about to reach retirement age will find it fruitful reading Zhou Daxin’s book The Sky Gets Dark, Slowly, winner of the Mao Dun prestigious literal award in China.

Its theme touches on the issues and sore fragility of growing old and reminds us that eventually the world we know will get lonelier as familiar faces and friends leave us.

This would resonate deeply among many of us who have lost someone close, leaving our world a little smaller.

The elderly can prepare to cope with loneliness by making new friends through social interactions and volunteering activities in their community.

Unfortunately, there are many unscrupulous scoundrels out there preying on vulnerable senior citizens to con them of their money and property.

How many elderly people have lost their retirement fund to get-rich-quick scams or were conned of their savings is anyone’s guess, as most would be too proud or embarrassed to relate their loss.

It is this probable fear of meeting dishonest company that many elderly stick to themselves and eventually become a recluse in their own home and a prisoner by choice.

As if there are not enough problems with ailments and loneliness associated with old age, some elderly folks are also being abandoned by their children.

The deterioration of family values in our society and diminishing level of filial piety are serious matters to be addressed.

The saying in my younger days that a mother can look after her 10 children but they cannot look after her has alas come to pass. What kind of values do we hold when we leave our parents to fend for themselves in their twilight years or conveniently push them into a home?

When I was growing up, my grandmother and mother often told me folk tales about filial piety. Have parents these days given up this tradition of instilling filial piety in their children by sharing such stories with them?

I am sure those who have been abandoned would be wishing for the fate of the mother in the tear-jerking Malay folklore Batu Belah Batu Bertangkup to take them away from a life of sadness and despair after all the sacrifices they had made for their ungrateful children.

We can see the changing values in today’s society and how each generation has evolved differently in their outlook and views of family tradition.

If we value and want to keep traditional family ties strong, we must at least imbue the young with a sense of filial piety and responsibility to take care of their parents when the time comes.

During birthday celebrations, one usually hears wishes for the celebrant to live to a ripe old age and have many children and grandchildren. This simplistic view assumes that children would take care of the elderly folks later.

Indeed, having knowledge of what old age brings, I would personally advocate wishing for a life free of major ailments and to be able to live independently.

Hopefully, many of us can finish life’s journey at a canter and not grow too old to be confined to a wheelchair or abandoned in a nursing home with the bedpan to drag to the finishing post.

Looking for way to get prepaid money back 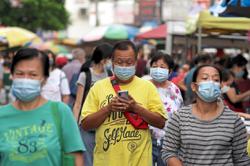 The effect of ignoring SOPs