FROM helping his mother design dainty shoes for Chinese women with bound feet to becoming a pioneer of Malaysian batik painting, Datuk Chuah Thean Teng has come a long way.

Now at 94, the China-born Chuah may be enfeebled by age but he has certainly attained an artist’s immortality through his art, particularly batik paintings that capture pastoral scenes of the multi-racial Malaysian lifestyle and culture.

“My ears, they are a bit deaf,” he says with a chuckle as he takes a seat in his Yahong Art Gallery in Batu Ferringhi, Penang. His second son, Seow Keng, is at his side to help him.

The senior artist’s hands, now resting on the handle of a walking stick, are used to wielding tjanting (wax-dispensing copper pot) and dyes that make fine art of batik, elevating the traditional art form from decorative designs on sarongs to respected artwork in galleries, wall murals and greeting cards.

But his hands have been skilled in handling other artistic tools too including pens, pencils, brushes and carving tools.

A chat with the family of artists including Chuah's three artist sons – Siew Teng, 62, Seow Keng, 61, and Siew Kek, 60 – helps to fit together a jigsaw puzzle of a father and art teacher who excelled mainly in woodcut, Chinese brush painting, oil painting and watercolour before he made his mark in batik.

Chuah’s interest in art and craft as a child was influenced by his mother who made shoes for Chinese women whose feet were bound.

“My mother who also had bound feet, drew designs for the shoes and embroidered them,” says Chuah who converses mainly in Hokkien and Mandarin.

Born in 1912 in Chenkiang village in Fujian, China, Chuah first came to Penang at the age of 14 to join his father who was a trader of paper umbrellas, combs and other supplies at a shop called Hai Kee.

Four years, later he enrolled at the Amoy Art School back in China but his formal art education was cut short due to illness.

He returned to Penang at the age of 18 with his mother to help his father run the family business.

Chuah’s pursuit of his passion in art was mainly self-taught, and he drew inspiration from the local rustic scenes of colonial Malaya, capturing them in woodcut prints. He signed his artwork, which comprised sketches, cartoons, comic strips, oil paintings, watercolours, Chinese brush paintings and even pastels, with the pseudonym Choo Ting.

“Since the family was not rich, he had to make his own carving knives for his woodcut and he chopped down jambu trees to make his own materials,” says his son Seow Keng.

Unable to afford expensive materials, which were also not easily available then, Chuah made oil paintings on cheap surfaces such as plywood and even cardboard which deteriorated over the years.

Since art hardly brought food to the table because artists were not highly regarded at that time, he worked as an art teacher while helping his father. That took him to places all over the country and even to Thailand.

His observation of the batik sarong worn by the kampung folk fascinated and inspired him to experiment with batik.

As an art teacher in schools such as Han Chiang and Chung Ling in Penang, he taught various art mediums while his cartoons, caricatures, comic strips and woodcut prints of local Malaysian scenes were published in a local Chinese daily.

When the Sino-Japanese war sent reverberations to overseas Chinese, the message in Chuah’s cartoons and woodcut prints shifted from peace and tranquillity to anti-Japanese propaganda.

“During World War Two, he burnt all his work carrying anti-Japanese propaganda before fleeing to Kelantan, Perak, Thailand and Burma to escape the Japanese who raided his Penang house several times,” says Seow Keng.

While the destruction of Chuah's artistic expression of the turbulent pre-war years was a sad loss, some of his earlier works in woodcut and oil paintings that survive today offer no hint of the artist’s anti-Japanese fervour of the time.

Before the war, Chuah proved to be quite a creative entrepreneur as he made, on a commercial basis, various products including sandpaper, chalk for school blackboards, whitener for school shoes, finger puppets used in operas, and even manually sculptured mannequins for textile factories.

After the war, he went into producing plasticine-like modelling clay.

In 1945, he opened his first commercial batik factory in Penang hiring workers to produce batik using both copper blocks and tjanting but the business folded up.

His big break came when his batik paintings were noticed by a British Council librarian Patricia Lim who encouraged him to hold his first batik exhibition in 1955 in Penang.

The novelty of turning batik from a functional craft for decorative wear to expressive fine art paintings caused a stir in the local and international art arena.

From then on, Chuah's name was to become entrenched as a pioneer of Malaysian batik painting, his works earning him international acclaim.

In 2005, he was honoured with the Penang Heritage Trust’s Living Heritage Award.

Through his batik paintings depicting rustic scenes of Malaysian folks going about their simple way of life, Chuah’s work helped put Malaysian batik in the annals of batik history that could be traced as far back to the 8th century in the Far East.

His eldest son Siew Teng says that for centuries, the sarong of South-East Asia have been made through a simple process of decorating cloth with vegetable dyes, while using wax to isolate areas of specific colours in a design.

Chuah's three artist sons have followed in his footsteps, specialising in batik as well as mastering various other art media.

The three sons now help to supervise the family’s Yahong Art Gallery, which was established as an art supplies and tailoring shop on Maxwell Road in 1953. It has since moved to its present location in Batu Ferringhi and sells art works done by Chuah and his sons as well as other curios.

Chuah, whose life stories are now mostly told through his sons due to his hearing problem, has these words to say about his life-long love affair with batik: “Chinese brush painting is associated with China while watercolour and oil paintings are associated with the west.

“We can say that batik is the art medium that best represents Malaysia.” 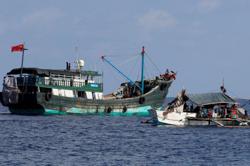 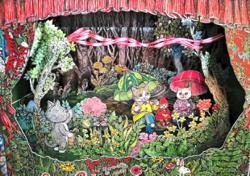