THERE was once a contrarian in Malaysian politics. He carried no baggage nor expectations of any political party unlike his other colleagues in Selangor.

But Abdul Jabar Mohd Yusof or better known as Cikgu Jabar was undaunted. He was the state assemblyman for Batu Laut in 1974, 1978 and 1982.

He must be well-liked to win against Umno’s formidable political machinery in three consecutive state elections.

What have we learned from Cikgu Jabar? A lot actually. It is not easy to win elections on an Independent ticket.

Even if you do, it is difficult to “service” the constituency. Allocation is normally channelled to members of the ruling party or coalition.

“Projek pembangunan” (development projects) did not come to Batu Laut but his voters understood. In 1986, he contested on the ticket of the now-defunct Malaysian Nationalist Party or Nasma. He lost spectacularly.

Cikgu Jabar is a legend in his own right. He redefined the idea of an “Independent candidate”. He could have started a political movement single-handedly.

He could have proven that being principled though without any political affiliation, a representative could still serve the people.

Then there was Tan Sri Shahrir Samad who stood as an Independent in 1988 in protest against Tun Dr Mahathir Mohamad’s Umno.

He won but then again Johor Baru has always been his stronghold since he made his debut in 1978.

There have been many Independents fighting for a place in Dewan Rakyat or the state assemblies over the years. But the good name of Independent candidates winning elections have always been sullied by those selling their “souls” to the highest bidder.

It was not uncommon to see them siding the winning parties at the slightest opportunity.

There was one instance in Malaysian politics when Independents could have been a force to be reckoned with. There was hope for new politics. They could have impacted upon law-making in the Dewan Rakyat.

It was in 2010 at the first meeting of the 12th Parliament in March. There were seven Independents in the House, four of them just resigned from PKR.

It was interesting what was said at the time. The spokesperson for the former PKR group was talking about an “independent caucus”.

He envisioned a caucus of “like-minded representatives with shared concerns”. That could have been a formidable “third force” in Malaysian politics.

Barisan Nasional has less than two-third majority at the time, with only 137 MPs. But sadly, the idea fizzled out.

I am more confident now of looking beyond political parties in electing MPs and state representatives.

The current situation is ripe for such a move. Things are changing on the ground.

The country’s political landscape has been redrawn dramatically. There is an overall mistrust of politicians and political parties right now. Divisive politics is eating us up.

Race and religion are being used unashamedly. We must strive for a better political ecosystem and to bring sanity to our political culture.

I have never seen so much toxicity and hatred towards politicians and political establishments.

The respect for politicians on both sides of the political divide is at the all-time low. People are not happy about how the Covid-19 pandemic crisis is being managed. They despised how political parties are spending too much time jostling for power.

Even as the country continues to register highest daily infections, the talk is still on politics and political survival. People are suffering yet politicians do what politicians do best – protecting their own interests.

I believe it is a good time to reset our political construct.

Parliamentarians must change for the better. Important decisions on policies must be made beyond party lines.

Parliamentarians must have the courage to disagree with the party they represent for the sake of the people they served. They need the independent caucus to be on their side when need be.

It is not easy to change the entire system and more so the mindset. You can’t just “retake political powers from political parties” that easily.

Taking into consideration most political parties have well-oiled machinery and a strong grassroot support, any attempt to fight against them is a gargantuan task.

However, it is more realistic to ensure a reasonable number of Independents to start a new political platform in Dewan Rakyat. After all no coalition commands two-third majority after the 2008 election.

The idea, according to its founders, is to deliver Independent MPs. They are to be “disciplined and principled” individuals with integrity to serve the people and “to protect and preserve the rights enshrined in the Federal Constitution”.

They are putting the number at 20, not many, considering we have 222 parliamentary seats now. But this is a good start.

Cikgu Jabar was alone in Selangor state assembly for 15 years. He did not change the system. But he helped change perceptions about what “Independents” can do in a democracy. 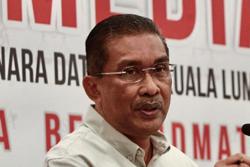 Cautious optimism for Tokyo 2020
Crying out for fairer terms
A black market amid the pandemic
What does independence mean to you?
Love's labour won: 24-year quest for a missing child ends happily
Battle of the bulges
Trust the vaccine, trust the data
The shadow play goes on
Satisfaction guaranteed
Why is Xi not in a hurry to meet Biden?