Why the govt needs a spokesperson

It cannot be business as usual. In the Internet era, effective communication is needed more than ever.

FOR 705 days, Sarah Huckabee Sanders was the face of President Donald Trump’s White House. Love her or hate her, she represented her boss with unflinching loyalty and utmost dedication.

She did almost everything humanely possible to defend Trump and his administration. She lied if she had to, even contradicting herself at times, but she stood firm facing the White House press corp.

Sanders was largely despised by the press. But she did what she was supposed to do: be the spokesperson for Trump and his administration, for better or worse.

She delivered her message across as instructed, responding to any allegation she felt was unfair and even taking the press to task for their biased reporting. In fact, she popularised her boss’ favourite accusation of the press – disseminating nothing but fake news.

She was not interested in building relationships or ties. Under Trump, the relationship between the government and the so-labelled “liberal press” is forever frosty. Sanders was not there to mend the rift. She had a job to do: push Trump’s agenda.It is interesting to study how the American press operates under such circumstances. Trump apparently knew he couldn’t win them, but he had his supporters to appease.

Sanders did a remarkable job on that score. Why worry about the press? Play to the conservative gallery. So, despite Trump’s policies – decried by allies and foes alike – he is still enjoying the support of his conservative base. I wouldn’t be surprised if one of the least popular presidents in American history is re-elected next year.

We have seen what a spokesperson can do for an organisation, a company or a country. Putting forth Trump’s argument was Sanders’ strong point. The press briefings at the White House were never that lively or combative. But the briefings conducted by Sanders were discussed on the airwaves, in print and on social media.

Effective communication or not, suddenly Americans are seeing their president, his senior officials and policies satirised in late night shows and comedies. They are suddenly paying attention to politics and even taking sides, which is good for democracy.

The Pakatan Harapan leaders, while they were in the opposition, perfected the art of criticising Barisan National. Barisan leaders were lampooned for their alleged corrupt practices, incompetence and excesses. Now Pakatan leaders are on the defensive. The very tools that they used effectively against Barisan are now being used against them, and effectively at that.

The fact that there are many newbies in the Cabinet, surrounded by enthusiastic but otherwise immature and inexperienced staff, exacerbates the problem. Unlike many Barisan ministers, the current ones have little experience being “in the government”. For many of them, the “opposition mindset” is still overwhelmingly evident.

Most ministers do not have a competent team to address issues or respond to and manage crises. Key messages are not well delivered. Even policies are not well explained. There have been many instances when a policy became a public relations nightmare. To make matters worse, ministers are bickering among themselves in public.The government needs to communicate with the people, and to do it well and fast. After all, it is all about communication first and last.

Key messages must be precise, clear and coherent. Consistency is key. The government must speak in one voice. Communicators must be proactive and play a reactive role too.It is about time we had a Cabinet spokesperson. The role of Sarah Huckabee Sanders must be replicated here. Someone who will face the media after Cabinet meetings.

The spokesperson will relay key Cabinet decisions of the day. He or she is not replacing any Cabinet members, just sending out clear messages to the people. The ministers will elaborate on policy matters later.

There is always the fear that the spokesperson will overshadow the Cabinet members. He or she must not be a minister or even a politician. He or she is just playing the role of a spokesperson to help the public understand the government’s vision and mission, and more importantly policies.He or she is also the communicator in times of crisis, informing and reassuring people when information is needed badly.

It is about time we change our ways of doing things. It cannot be business as usual. In the Internet era, effective communication is needed more than ever. People are getting news from all over, mostly untruths, even fake ones.

In real time, purveyors of such news will get the attention of the unsuspecting public. Back then, a master propagandist famously said: A lie told 10 times becomes the truth.In today’s world, truth has to be proven so or else it is labelled as a lie. US race riots: Clashes outside White House as US cities under curfew 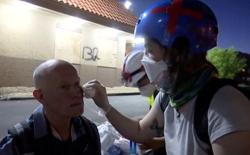