The illegal occupation of Government House since Aug 26, originally aimed at bringing down the PPP government, is in danger of sliding into a sideshow.

Here’s how to play the game.

Go – during the wee hours of the morning – to Bangkok’s Government House, which the People’s Alliance for Democracy (PAD) has illegally occupied since Aug 26.

Most of the time nothing untoward will happen. But – if fate decides to pull the trigger – an explosive device will come shooting in. 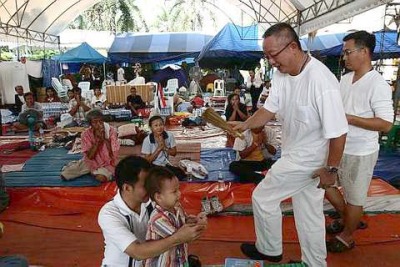 That’s what happened on Nov 11.

At around 3.25am an explosion occurred about 50m from the stage where PAD leaders spew their venom against Thaksin Shinawatra (the former Thai premier ousted in a 2006 coup), Samak Sundaravej (a former Thai premier who recently flew to the United States to seek treatment for liver cancer) and anyone partial to the Shinawatras.

The blast – which may have been caused by an explosive device fired from an M29 projectile or M79 grenade launcher – injured several anti-government protesters.

It was the fifth bomb attack in and near Government House since Oct 30.

The Nov 11 attack came despite PAD co-leader Sondhi Limthongkul’s spiritual effort to keep evil spirits off ground zero of the alliance’s campaign to oust the ruling coalition led by People Power Party (PPP), which is seen as pro-Thaksin.

On Sunday, dressed in white, Sondhi – who the Bangkok Post described as looking on that sacred occasion “more like a sorcerer than the head of the anti-government movement” – sprinkled holy water around the compound of Govern­ment House.

“My dear brothers and sisters, this is a sacred activity.

“My revered masters told me to perform this ritual to counter evil spirits and to clear this area (to pave the way) for our triumph,” the English-language newspaper reported him as telling the PAD crowd.

The ritual, the Bangkok Post added, “was held after the PAD was targeted in a series of bombings by unknown assailants that injured some of their guards”.

It was not the first time Sondhi, a media mogul and Thaksin’s arch rival, performed a spiritual rite to counter the black magic seeking to destroy the PAD.

On Oct 29, in a speech broadcasted live on his ASTV satellite television network, Sondhi claimed that for many years, evil people used black magic to suppress the power of some of Bangkok’s holiest sites such as the City Pillar, the Equestrian Statue of King Rama V and the Emerald Buddha. He then described how his team – masters and adepts – rectified the “suppression”.

“The (base of the) Equestrian Statue is like this (Sondhi draws a hexagon with his hands) with the statue inside,” the Nation reported him as saying.

“Tacks had been inserted at the six corners so that the statue of the revered king could not emit its power. We drew out the tacks from all six places.”

Sondhi continued: “I must thank the women of the PAD because after (the tacks) were pulled out, to ensure they would not be replaced, sanitary napkins from menstruating women were placed on the six points.”

“Experts said the spirit adepts were furious because they could not send their spirits back as their magic was rendered ineffective.” (Menstrual blood, in Thai superstition, is believed to have great destructive power.)

What to make of Sondhi’s revelation?

For Thammasat University political scientist Prajak Kongkirati, the rituals are aimed at boosting the PAD supporters’ morale by making them believe they are waging a holy war.

“These kinds of spiritual activities are very much needed at a time when a political or social movement faces declining support from the public,” he told the Bangkok Post.

“The leaders have to do something to lift the demonstrators’ spirits.”

But Prajak warned: “An obsession with the supernatural could tarnish the image and lessen the credibility of the PAD, which could be seen as an irrational movement rather than a powerful group of people who produce solid evidence about the government’s flaws.”

But it is not all dangerous and supernatural at Government House. There’s also romance.

On the day of the Nov 11 bomb attack, two PAD supporters – who met at the anti-government rally and subsequently fell in love – tied the knot at Government House.

Hmmmm ... at the protest site you can also be struck by Cupid’s arrow.