Endgame still out of sight

Time to go: Migrant workers at a bus station to return to their hometowns after a lockdown was announced to check a Covid-19 resurgence on the outskirts of New Delhi. — Reuters

What we can learn from India’s premature declaration of victory over the pandemic.

IT’S downright sickening. Every time we think we have flattened the Covid-19 infection curve, something happens to inflate it again.

After months of obeying health safety protocols and with vaccinations underway, albeit rather slowly, we were eagerly looking forward to pulling the brakes on the pandemic.But no, we have the dreadful news that infection rates have soared again. The number of cases breached 2,000 last week, which was faster than what was projected by the Health Ministry.

The previous Pakatan Harapan government had set up standard guidelines and designated hospitals for testing right after the first reported imported cases. When Perikatan Nasional took over in February, the number of reported cases on March 2 was still low, below 30.But two events took place that became super-spreaders of infection. The first was the Feb 27-March 1 religious gathering in Sri Petaling, Kuala Lumpur, with 16,000 participants, including 1,500 foreigners.

The Health Ministry later confirmed this tabligh cluster was responsible for 48% of the country’s Covid-19 cases at that time.

The second super-spreader event was the Sabah elections held in September 2020. Large numbers of politicians and their supporters went in and out of Sabah from other states during the campaigning period without screening. Social media posts showed many politicians meeting voters without wearing masks and social distancing.

Compulsory screenings were only implemented post-election but without a mandatory 14-day quarantine. Several clusters of infection that appeared were directly linked to this interstate movement. In Selangor alone, 26 new clusters were traced to individuals who had returned from Sabah.

When the third wave of infections hit us in October, 2020, the government was in a quandary. The first movement control order and its subsequent versions had taken a terrible toll on the economy and government coffers were straining to provide stimulus packages in the hundreds of millions of ringgit.

At the same time, the government’s public health response was often confusing as different authorities kept changing the SOP.

Double standards in the enforcement of the SOP further aggravated public sentiment.

What’s more, we didn’t adopt a mass testing strategy and overlooked poor living conditions of migrant workers and overcrowding in prisons which were breeding grounds for infection.

Since late 2020, we had been told that vaccines were coming and once mass vaccinations were underway, the virus would be quelled, perhaps by the end of 2021.

Our vaccination programme has got off to a spotty start for various reasons. And although we are under various forms of movement control, businesses and offices have reopened, people are out and about eating, shopping, exercising in gyms, watching movies. All in, it does make us feel that we are getting back a semblance of our old lives.

And that’s why infection rates are rising again. It’s happening elsewhere too, including in Japan. The rest of the world is watching how that country will manage the rising numbers as it will definitely affect the fate of the Tokyo Olympics scheduled to begin in July.

But to me, currently the country that holds the most important lessons for us all is India. Initially, the country seemed to be able to effectively bring down its infection rate to almost nothing. That was attributed to its largely rural and younger population and the people’s already robust immunity built from exposure to many other diseases.

So in early March this year, India declared it was “in the endgame” of the pandemic.

The BBC reported that with politicians, policymakers and the media so sure India was truly out of the woods, in late February India’s election authorities announced key elections in five states with 186 million eligible voters.

In less than a month, euphoria evaporated. By mid-April, with more than 100,000 cases a day, India was facing a coronavirus tsunami.

Despite soaring infections, politicians continued to hold mass rallies across the country for state elections and thousands of fans were allowed into stadiums to watch cricket matches.

Indians celebrated Holi, the festival of colours, and Kumbh Mela, a Hindu pilgrimage when millions of devotees daily take a dip in the holy waters of the Ganges River.

India’s victory cry was clearly premature. Infections skyrocketed because people let their guard down, fuelled by mixed messages from the government that allowed political rallies, sports and social events, and religious gatherings.

India’s vaccination plan also slowed down. Fewer people took the jabs because the declining number of infections had lulled them into a false sense of safety.

Another thing India failed to do, say experts, was to carry out genomic surveillance when variants of the virus began appearing. They now suspect some of the new variants could be behind the surge in infections.

What Malaysia can obviously learn from India’s experience is that we cannot let down our guard even when the number of cases drop significantly as long as vaccinations have not reached 70%-85% of the population and herd immunity has not been achieved.

We have seen how two events – one religious involving thousands of people gathering without safety protocols and another political that allowed people to move freely interstate without screening and quarantine time – spread the disease like wildfire in our nation.

That’s why while allowing Ramadan bazaars is a popular move, if crowds are not properly controlled and people are careless about wearing masks and sanitising, it could lead to new infection clusters. That’s why the government should also be very careful about allowing interstate travel for Hari Raya Aidil-Fitri next month.

We are all feeling pandemic fatigue and long for the day when we can throw off our masks and mingle freely again. But that is no reason to press the government for early relaxation of strict protocols and responsible collective behaviour.We should remember that the only disease humankind has eradicated is smallpox, which killed more than 300 million people in the 20th century alone.

Smallpox had a fatality rate of 30%, which is much higher than Covid-19’s 0.5% fatality rate. Yet we could defeat smallpox, even though it took centuries. As a YouTube video by explanatory journalism site Vox explains, its eradication was made possible because a really effective vaccine was discovered (by Edward Jenner in 1796), no animal vectors were involved, there was true global cooperation and contact tracing and isolation of patients.The Covid-19 virus, on the other hand, is not a good candidate for eradication. The biggest difficulty is how it spreads. Unlike smallpox, animal vectors play a role and an infected person doesn’t have to show symptoms to sicken others.

Ultimately, our best bet is for humankind to build immunity and for Covid-19 to become “endemic, always present but rarely developing into something more serious than a common cold”, as the Vox video puts it.

But at that point, don’t be too hasty to throw away your masks and hand sanitisers.

Even if we tame SARS-CoV-2, virologists have been sounding warnings that Mother Nature has plenty more viruses to spring on us.

This is our 21st century reality and truly the New Normal. 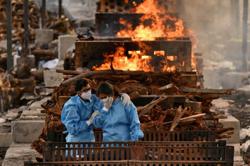