Could this be the chink in Trump’s armour?

On the up and up: Yang with his wife Evelyn after speaking at a town hall meeting in Sioux City, Iowa. — Reuters

THERE’S a Chinese guy who wants to run for the highest office in the land. No, it’s not some DAP fellow and it’s not this land. It’s Andrew Yang (pic), an American of Taiwanese descent who believes he can topple Donald Trump.

Never heard of him? Me neither till a month or so ago. He popped up in my Google news feed one day and admittedly, I got curious about him because of his ethnicity.

But the more I watch, hear and read about him, the more impressed I am by him.

Just a year ago, he was unknown to the American public. A non-politician, ignored and overlooked in a very crowded field of Democrat presidential candidates with big names like former US vice-president Joe Biden, popular, long-serving Senator Bernie Sanders and billionaire Michael Bloomberg.

But Yang has been doggedly campaigning non-stop, patiently and consistently explaining what he has to offer. This once no-hope outsider has now been dubbed by the New York Times as “the Internet’s favourite candidate” and is no longer ignored by the media and other candidates.

More importantly, Yang2020 with slogans like “Humanity first”, “Not left, not right, it’s forward”, is gaining traction and winning over Americans and fans from around the world.

Yang feels compelled to run because he believes he can unseat Donald Trump and fix what’s gone very wrong in the American government and economy.

His key message is America – and I would add the world – is ill-prepared for the fourth industrial revolution, the “greatest technological shift in human history”.

He says the reason why “Donald Trump is our president today is that we automated away four million manufacturing jobs in Michigan, Ohio, Pennsylvania, Wisconsin” and warns the same thing will happen to millions more middle-aged, middle-income Americans who work as call-centre workers, truck drivers, retail employees and fast-food workers in the next five years.

Yang has had enough of Trump whom he describes as a “narcissist TV star” who blamed the job loss on China and immigrants.

He declares himself as “the ideal candidate for this job – an Asian man who likes MATH”. That is an acronym for his main campaign slogan, “Make America Think Harder” and underscores Yang’s strong suit of using statistics and studies to demolish Trump’s claims of a robust American economy and better-off citizens.

Yang counters: “The indicators already show that we’re falling apart. America’s life expectancy has declined for the last three years in a row, the first time in a hundred years, because of surges in suicides and drug overdoses.”

As the Washington Post opined on his rise: “It’s fitting that such an unexpected political movement would have an Asian American man as its underdog figurehead. Yang is a stand-in – and hero – for all the people who have acquired a deep understanding of how things actually work while toiling away in the obscurity.

“That’s the role in which we are most habituated to seeing Americans of Asian descent: hyper-competent but deferential, best suited for those essential but essentially subordinate roles – and no other.”

By running for president, the Post adds “Yang has cracked the code on how to be something that doesn’t have much precedent in our political culture: an Asian American man able to summon and inspire large, enthusiastic crowds across the country in support of his bid for national leadership.

“He’s gone from being a novelty candidate to providing a glimpse at a future when Asian Americans become universal figures in American political life, and realise their potential not just to serve but to lead.”

The 45-year-old son of Taiwanese immigrants with degrees in political science and economics and law and father of two young sons, believes he has the solutions to save America. He has more than 150 policy proposals on his website, yang2020.com.

The centrepiece policy of his campaign is giving a universal basic income (UBI) of US$1,000 a month – he calls it the “Freedom Dividend” – to all Americans above 18 with no strings attached.

He says UBI will take the economic foot off the necks of millions of Americans, the vast majority of whom live from paycheck to paycheck, and cannot afford an unexpected US$500 expenditure.

UBI will also act as a buffer for many who are likely to lose their jobs to automation and have a trickle-up economic effect.

To fund this multitrillion expense, Yang plans to impose a Value Added Tax (VAT) on tech giants like Amazon and Google that have reaped billions from automation but pay nothing in taxes.

“It’s no wonder our economy doesn’t work for us when the biggest winners aren’t paying their fair share, ” says Yang who insists that personal data is the new oil of the 21st century and that people should get paid for it by companies using such information to power their products and services.

He is also big on refocusing education away from college degrees to vocational jobs like plumbers that cannot be replaced by robots.

Despite his lack of political experience, Yang comes across as articulate, intelligent, witty and sincere and is able to tackle hard and hostile questions on foreign policy, affordable healthcare, dealing with China, climate change, gun control, abortion, student debt and prison reform without losing his cool.

While his UBI plans has detractors, Yang’s ideas and policy proposals are seen as fresh, bold and detailed. Coupled with his high likability factor, he is drawing supporters by the thousands who call themselves the “Yang Gang” and helped him raise US$16.5mil in just three months that has kept him in the race.

Still, Yang is very far behind the leading Democrat nominees on the numbers game. What’s more, America may have elected a black man as their president but it doesn’t mean they are ready for an ethnically Chinese president.

Trump himself once said that the only thing that he worried about was some total unknown that no one had ever heard of comes along to challenge him. That describes Yang to a tee.

Whether Yang is really the dark horse who will throw Trump out of the Oval Office remains to be seen. An indicator of Yang’s staying power will take place on Feb 7 during the New Hampshire democratic party debate.

I am, like many non-Americans around the world who are sick of Trump, hoping for change. Many of Yang’s proposals make sense for many countries too, mine included.

That’s why I am rooting for him because I think he could very well be the leader of the most powerful nation the world needs. He will definitely bring dignity, intelligence and sanity back to the presidency.

I echo what a netizen wrote: “Dear USA, please elect this guy. Sincerely, Rest of the World.”

The writer, June Wong, crafted the heading and wanted it retained.

She knows "chink" has been used in a derogatory and racist manner, but she, as a Malaysian of Chinese ethnicity, wanted to “own” the word.

She also says: “As you know, ‘a chink in the armour’ is an accepted idiom to show a vulnerable spot, so I am using it to say the chink that could ‘kill’ Trump could ironically be a person of Chinese descent.

“It’s a deliberate play on the word.”

She believes Andrew Yang would see the humour in the headline as he himself has deliberately used self-deprecating politically incorrect racial terms to, as he says, poke fun at them to dispel and weaken them. 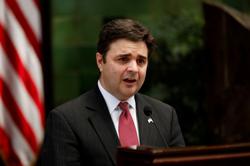