Taking stock and moving on for Malaysia

transpired since Covid-19 hit the global stage. Let us count them all:

An elected Pakatan Harapan government that was supposed to be the saviour for a progressive Malaysia imploded.

A new, Malay-dominated Government came into being in its place with the combination of a dissident-faction of Pakatan, mainly parts of Bersatu and PKR, together with Umno and PAS.

The movement control order (MCO) coming into effect due to Covid-19 at about the same time as our political implosion. It has lasted, now even in a more relaxed “restricted” version, for all of four months. This has had a devastating impact on an already fragile Malaysian economy.

The non-stop politicking and tough police action to silence criticisms do not augur well for either political stability or economic turnaround. The economy is in serious need of attention and massive infusion of confidence and injection of liquidity for growth.

So where shall I begin? It is good for us to understand what brought us here to see how we can move from here.

Many have said that the Pakatan government imploded due to its pursuit of a progressive agenda. An agenda that pushed its Malay-centric faction to cave into the arms of the more pro-Malay Umno and PAS. I do not buy this at all.

What I see is the lack of strong Malay leadership in Pakatan to show a different way and articulate a competitive confident Malay society to its followers in their parties and to the Malay society at-large.

The Malays who voted for Pakatan knew very well its progressive agenda and voted for it all the same. They did not reject the appointments of non-Malay ministers to substantive ministerial functions. The rejection came from loud opposition voices who lost the election.

There was no counter-narrative provided by the Malay leadership in Pakatan, Tun Dr Mahathir included. Instead of Pakatan shutting down those voices with strong action, it backed down and effectively surrendered its agenda and leadership to the extremist voices of those they had defeated in the previous elections. What irony.

And then we saw intense politicking for the top position from the very first day of the Pakatan government by either the so-called PM-in-waiting and/or his followers lobbying for Tun Mahathir to step down and hand over the reins to Datuk Seri Anwar Ibrahim.

How does one govern when one cannot even leave things alone for the one in-charge to make decisions without creating an environment where someone is constantly looking over the shoulder and nagging for the head at the table?

Herein lies a fact that now can no longer be denied. Whether we love, hate, or blame him, Mahathir had the majority numbers to command Parliament for the Premiership to form the Pakatan government, whatever the deal maybe. It is obvious today that Anwar had no such confidence of the majority to command the post of the PM; he cannot even command his own PKR party.

Pakatan should have moved from Anwar and Anwar should have been the elder statesman enough to make way for an acceptable PM after Mahathir, whoever that might have been, instead of harping on and harking for the position as if it was a personal entitlement.

Your sacrifice, or whatever one may want to call it, is just that; a spark to start a reform movement 20 plus years ago. Governing and moving the nation forward is not an entitlement you demand. The sacrifice is to know that you are no longer the viable candidate and to help usher in new leadership for a new Malaysia.

Instead, what we saw was Mahathir reverting back to his post 1987 preservation-mode and Machiavellian tendencies, and Anwar wanting the Prime Ministership at all cost the same way he went after it then, toppling one obstacle after another for his ultimate prize. This time – the same way they then in partnership destroyed our institutions of governance and education through Malay and religious-centric policies in the mid 1980s – they together today destroyed the hope of Malaysians who voted for change on May 9,2018.

So here we are. Today, we have an overwhelmingly Malay-majority government, not because as some suggested was inevitable as the only palatable solution to the majority Malay-voters, but because there was no leadership from among the Malays elected within the PH governing infrastructure.

Not from Mahathir, not from Anwar and not from any other ministers within that Pakatan Cabinet.

There was no grabbing of the leadership mantle to ride the momentum of the GE14 and show our Malay-society that we are a competitive people with the self-confidence that made the change possible for all Malaysians on May 9.

This brings us to our next predicament, and what a predicament we have. I am no alarmist. But we need to face reality now. Let us not kid ourselves, we are now facing an economic crisis of 1997 proportions. We were already in serious economic trouble, Covid-19 merely accelerated whatever that was coming. It is now here. During the Asian financial crisis our Ringgit was pegged at 3.8 to the dollar. Today it is north of 4.2.

The World Bank expects Malaysia to see a 3.1% economic decline in 2020. Depending on whose numbers you want to take, while the Bank sees a negative 0.1% GDP growth for 2020, the IMF estimates it to be negative 1.7%. Regardless of the Bank note that our economic contraction is approximately 10% in the second quarter, the same as it was in the final quarter of 1998, I am of the opinion that things are even worse than it seems. When you take manufacturing accounting for over 40% of GDP, and with approximately 20% of our GDP coming from a declining oil & gas sector, we are in deep trouble.

For an industry that could well be a major growth sector, I have always maintained that the creeping religious fanaticism in Malaysian administration would kill our tourism industry. Covid-19 just put paid to that destination. Hundreds of thousands of jobs are not coming back. Hotels have shut down for good including the venerable “grand old lady” of Bukit Bintang.

When you consider that our youth unemployment figure was already at approximately higher than 10% pre-Covid, which was three times the global average, the future of the nation is at serious risk. The Government of the day needs to seriously address our economic future now, but can they?

What does all this tell us? They tell us that whatever we as a nation has done has been fundamentally wrong in policy and implementation. Our policies and their implementation in our education, administration, and governance, at least over the last 30 years, have produced political “leaders” who create bad policy and bad government. And these “leaders” and their policies in turn churn out even worse like-minded and like-character politicians who enforce upon the nation the same bad governance in a vicious downward spiral.

But some of you may say - wait a minute, what about our hey days of being an Asian Tiger? My answer to that is – were we really? Or were we just part of the natural order of the then deregulated free-market global economy for a certain window of period in our history?

After all these decades, having observed how money flows for higher returns in capital markets around the world and how jobs move from one under-developed nation to another chasing lower production costs, I have concluded that the real Tigers took advantage of their window by creating and maintaining inherently strong educational and governance systems. These steps transformed them into economies of developed nations: witness South Korea and Singapore.

We did not do that. In fact, we took the money and wasted our window of opportunity and made our systems worse. We have subsidised our systemic inefficiencies, leakages, and declining real productivity with oil money for almost four decades. The only saving grace for the nation has been our real private sector - especially our small and medium businesses – that has kept its bargain in propping up the rest of the economy. They are our unsung and nameless heroes toiling through these inefficiencies.

I am not going to elaborate on the policies and the implementation these leaders bestowed upon us. I and many others have written about them countless times before, it does not need repeating. But what is of note is that in a democracy it takes elected individuals to create, legislate, implement, and administer bad governance. That has been our collective failure as citizens. We elected these politicians into Parliament and they into Government.

I am not sure where I should point for the root cause. But the current political fiasco and fractured Parliament, as well as the resulting state of our economy, point to me both the cause and a potential solution.

It is certain that those elected do not serve the nation and its people. They serve their political party and their leaders. We the citizens and our votes are just a means to that end for them. We need to exercise better judgement and a new way to look at those we elect.

We need to look elsewhere; away from the political party system that churn the same politicians with the same incapability again and again.

I believe we must find a way to get individuals from the private sector to take up public service and elect enough of them into Parliament to up end the hegemony of party politics.

Get capable Malaysians with real life experience into Parliament with the right character to lead the nation. They have been out there doing it for real instead of talking up a storm. We need to find a way to bring them to Parliament. Political parties be damned.

Let us leave the how for now and just think that maybe this is our hope for real change.

Activist lawyer Siti Kasim is the founder of the Malaysian Action for Justice and Unity Foundation (Maju). The views expressed here are solely her own. 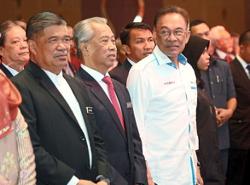