In memory of Police Constable 28847 Hero cops: The Polis Hutan, aka Field Force, fighting the Communists. The columnist's father is standing in the centre - 'looking like P. Ramlee in the movie ‘Sarjan Hassan’.' － Photos provided

Today, I would like to pay tribute to both my father and the Malaysian police force for their contributions to me personally and to the nation we love.

Now, as with many things Malaysian, our police force has not come out completely rosy in the last 25 years what with custody deaths and corruption cases. But if anything, this tribute to my father – a police constable for 38 years who did many things for me – is about the three most important things he DIDN'T do.

I remember the day my father took me to St Marks Primary School in Butterworth, Penang, for my first day of school. My father was educated at King Edward Primary School in Taiping, Perak, until Standard Three when the Japanese invaded Malaya during WWII. He said he continued for another two years learning Japanese after that.

Searching for a needle in a haystack

Making do in PPR flats 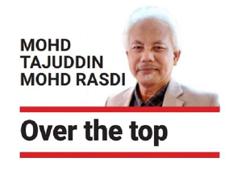 The night of long knives in Umno
A RM1.5 trillion debt hangover
Reunions and revelry hold deep meaning
A voice of hope needed for athletes in tough situations
Charity after self, not selfish charity
Ruminations on life over yee sang
Opportunity to overcome institutional inertia in Sarawak football
Let’s celebrate inclusivity and moderation this festive season
Why Anwar should have been in Davos
Hitting refresh in 2023