Humour is a commodity severely lacking in our political circles

SOMETIMES, having a sense of humour is counterproductive, especially when some people take their politics too seriously.

The other day in Nabalu Lodge at Kundasang, Sabah, I took a photograph with the majestic Mount Kinabalu in the background and made the "W" hand gesture. I posted the picture on Facebook and Instagram.

For those clueless about Sabah politics, the W hand gesture is the symbol of Parti Warisan Sabah. Caretaker chief minister Datuk Seri Shafie Apdal is its president.

I also shared the photograph with a Parti Cinta Sabah (PCS) media maestro. “Wow. Do the love sign, ” the media strategist replied.

PCS is a third-force party headed by former Foreign Minister Datuk Seri Anifah Aman. Its symbol is a heart with Sabah’s map in the background. 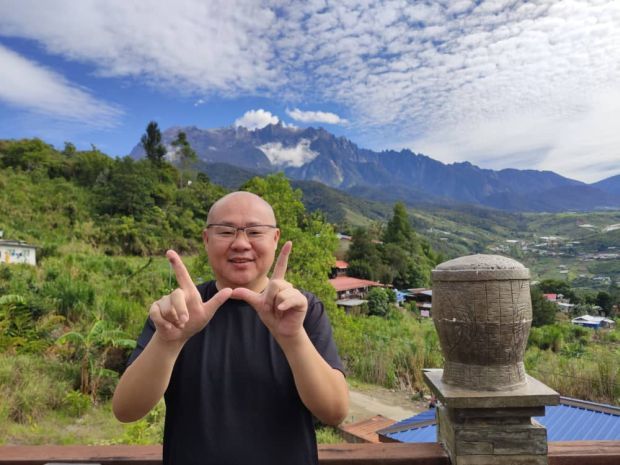 I took another photo with the same background, but this time, with a “heart” hand gesture. I shared it on Facebook, Instagram and Twitter because I realised some people might label me a Warisan supporter simply because of the “W” picture.

“Rupanya dia adalah penyokong Warisan. Kenapa dia sokong orang undi Warisan? (Apparently, he is a Warisan supporter. Why does he support people who vote for Warisan?), ” read one of the messages.

A screenshot of the comments on my “W” picture posting on Facebook accompanied the message.

“People take their politics too seriously (laughing emoji), ” I replied to the politician.

“Yes, it is the political season now, ” he replied.

Why did I pose with the “W” hand gesture for a photograph? Well, occasionally, this wicked sense of humour of mine creeps out.

Besides, it’s also easier to make a “W” hand gesture. Friends on Facebook asked me to do a Parti Bersatu Sabah (PBS) or DAP hand gesture, and I replied: “How to do that?”

The journalist in me also knew that a post with the “W” sign would turn the cogwheels of contention. At that time, with Mount Kinabalu majestically in the background, I thought I could dine on controversy for breakfast.

I’m in my home state to get on the ground to understand politics in the coming snap Sabah polls. My political tourism jaunt is a looping 1,300km, nine-day road trip from Kota Kinabalu to Kota Belud to Ranau to Telupid to Lahad Datu to Semporna to Tawau to Nabawan to Keningau to Papar and back to Kota Kinabalu. That’s all of them then!

On the first night of my journey, I stayed at Datau Nakapan Eco Tourism in Melangkap. It’s a campsite with a gorgeous view of Mount Kinabalu.

I took a photograph and posted it on Instagram, Facebook and Twitter with the message: “Writing ‘It's Just Politics’ column with Mount Kinabalu in the background in Melangkap, Kota Belud.”

It was my most liked post on Facebook ever – 510 likes and counting. And I don’t think people liked it because I was in the foreground.

Encouraged, the next day when I was at Nabalu Lodge, which has a front view of Mount Kinabalu as if it’s on your doorstep, I took an Instagramable photograph.

But with politics, some people just take things too seriously.

When I take a photograph making the “heart” or “W” hand gesture, they label me a supporter of PCS or Warisan. They can’t brain that when you do it, it doesn’t necessarily mean you’re a party supporter.

But it’s sometimes challenging to reason with hardcore supporters.

Take, for instance, my political column It’s Just Politics published by The Star on Sunday.

I try my best to be neutral in my political writing. However, one Man’s Warisan is another man’s Umno.

I’ve written several articles about the toxic rivalry between former Sabah chief minister Tan Sri Musa Aman of Umno and Shafie. When the hardcore supporters of Team Musa and Team Shafie read them, both sides are incensed.

They expect me to write only positive stuff about their beloved leaders.

If there’s anything negative about one or something positive about the other, I’m seen as biased.

They have the Bush attitude of “if you are not with us, you are against us.”

What I’ve learnt is you can’t please everyone. My editors have told me that if your writing has upset both sides, it means you’ve written a balanced piece.

So, do I support Warisan, PCS, PBS, DAP, Upko, SAPP, Umno, PBRS, LDP, Parti Pribumi Bersatu Sabah, Sabah STAR or Usno? (Did I miss any other parties? I’m sure I did.)

Also, I’ve had coffee and whisky with enough politicians to know that the larger-than-life impression the public has of them can be far from reality.

As Sabah politics heats up, remember that what you see – journalist or politician making the W hand gesture – is not what you get.