THE United States ranks low in the credibility stakes. It can no longer wax lyrical about free trade and fair play because the world now knows that when it finds itself facing stiff competition, it uses a ruling the magnitude of a nuclear bomb to retaliate.

The ban essentially means that future Huawei phones will no longer get Google play apps, YouTube, and almost certainly no updates to Android Q or other platform-level upgrades since these would require Google’s sign-off, too.

Sure, you can still make calls or use WeChat and other Chinese platforms, but for users in most parts of the world, the phone is pretty much useless.

Word is that Huawei poses a security risk, but no clarification has been forthcoming to what these threats include exactly.

There is a sense of déjà vu here.

The world was once told by the US and its allies that Iraq had weapons of mass destruction, but we learnt in the end there were none. Now, we have the Iran threat, but that’s another story all together.

From what little info has trickled into the worldwide web, the suggestion is that Chinese-manufactured devices have hidden back doors that could potentially allow an attacker to gain special access.

It sounds like a script excerpt from a James Bond movie, with spooks using a master password to break into high security facilities.

But incredibly, Huawei and ZTE Corp, another telecommunications equipment manufacturer, were cleared by the US House of Representatives permanent select committee on intelligence.

The two had been accused of providing “incomplete, contradictory and evasive responses to the committee’s core concerns” during their year-long investigation on the threat they supposedly pose to American interests.

In the end, the committee found no concrete evidence of infringement. But that didn’t stop the two companies from being labelled a national security risk and getting kicked out of the US.

IS, the German internet security watchdog, inspected Huawei laboratories in Germany and found no evidence of espionage, and The New York Times quoted American officials saying that the case against the company had “no smoking gun – just a heightened concern about the firm’s rising technological dominance”.

Rightly or wrongly, in the game of perception, the US has lost its moral ground. Thanks, in many ways, to an impulsive president.

Most of the world’s population thinks the bullying of Huawei is simply Trump’s hallmark. It isn’t about a security risk, but an economic threat.

Outside China, Huawei is arguably the most successful Chinese consumer brand so far. Thanks to a good and relatively cheaper product, it is now the second largest phone vendor in the world.

One strong accusation levelled at Huawei is that it enjoys Chinese government backing, and that China uses its spies to steal US technology for these private companies.

It’s a really warped perspective because, using the same logic, why is the US president taking such a hard line against a private company that’s merely selling phones?

The answer could well lie in the technology race.

Now, it’s about who launches 5G first, the next generation of mobile broadband imminently replacing 4G.

With 5G, we will see exponentially faster download and upload speeds. Huawei is widely renowned for being 12 months ahead of its competitors in the 5G race.

It began to develop its own 5G technology in as early as 2009. In 2013, Huawei hired more than 300 top experts from the wireless industry around the world and announced that they had invested US$600mil (RM2.5bil) in 5G research.

The South China Morning Post has, however, also reported that apart from its tremendous commercial benefits, 5G – the fifth generation of mobile communication – is revolutionising military and security technology, which is partly why it has become a focal point in the US’ efforts to contain China’s rise as a tech power, and the Western nation’s allegations against Chinese companies is simply symptomatic of its insecurities.

“The future landscape of warfare and cybersecurity could be fundamentally changed by 5G.

“But experts say 5G is more susceptible to hacking than previous networks, at a time of rising security concerns and US-China tensions on various interconnected fronts that include trade, influence in the Asia-Pacific region and technological rivalry.

It’s also a fight between China and the US on who leads the artificial intelligence domain, as with 5G advancements, it means “whereas existing networks connect people to people, the next generation will connect a vast network of sensors, robots and autonomous vehicles through sophisticated artificial intelligence.

“The so-called Internet of Things will allow objects to ‘communicate’ with each other by exchanging vast volumes of data in real time, and without human intervention.

“Autonomous factories, long-distance surgery or robots preparing your breakfast – things that previously existed only in science fiction – will be made possible.

“Meanwhile, though, it is being identified by many military experts as the cornerstone of future military technology,” the newspaper reported.

As TV personality Trevor Noah says, humorously, in his show, the 5G war isn’t just about “loading an entire movie in three seconds but about the Chinese spying – which the US also wants to do.”

He sarcastically added that “the US is losing the 5G race and luckily, we have a maniac in our team who’s willing to play dirty.”

As the battle rages on, spilling into the already acrimonious US-China trade war, the controversy has become more bitter, and complicated, with the US egging its allies to ban Huawei from building its next generation of mobile phone networks. So far, Britain, Germany, Australia, New Zealand and Canada have either banned Huawei or are reviewing whether to do so.

Japan, a US ally, seems to have been dragged into the propaganda of persecuting Huawei, too.

In China, the actions against Huawei have stirred a storm of nationalism, with the Chinese calling for a boycott of iPhone, a reaction which could eventually affect other American and European products, at the rate things are escalating.

Even within the Chinese diaspora, the messages of unequivocal support for Huawei have gone viral in the world’s social media sphere.

The irony is that the iPhone is not only assembled in China, but its very inception starts in that country at a much earlier stage, and from a much deeper part of the earth, too.

“Lanthanides, scandium, yttrium and some other alien-sounding names at the bottom of the periodic table (remember your secondary school?) make the iPhone ‘light, bright and loud.’ Its colour screen, glass polishing, circuitry, speakers and vibration unit come from a mix of these rare earth minerals,” it says in Finances Online.

The report added that where American companies would take months to pool thousands of industrial engineers, and even more months to construct new assembly lines to accommodate a trivial but urgent change in an iPhone spec (say, its glass panel needing to curve to hatch on the body six weeks prior to launching), it only takes 15 days in China to do the same.

“To put it in perspective, one production line in China can assemble 72,000 iPhone 5 back plates daily; one factory can have four to five production lines and China can have as much as a hundred of these factories, opening or closing a few of them depending on the current demand.

“The last part – opening and closing plants like a mom-and-pop store – is almost impossible in an American economy.

And it’s common knowledge that Mickey Mouse merchandise is made in China, and likewise all the branded sportswear sold globally. The profits these companies are raking in are simply down to the low cost of operation.

Trump should know and do better. Instead of threatening and bullying Huawei with trumped up charges, he should urge American companies to be more competitive, make better products and keep prices low.

I am dumping my iPhone, upgrading my South Korean Samsung and for the first time, getting myself a Huawei. I hear the camera is really good, and it doesn’t even need a zoom lens for magnification. And that sophistication comes from a license to thrill. 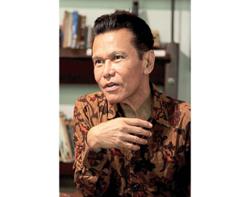