Everything feels strange, unusual and quite frankly unbelievable. However, there is also a feeling that we have seen it unfold before. On our televisions or in cinemas – we have seen many movies depicting the circumstances unfolding now.

So while there is a surreal feeling about the events of the past couple of weeks – from restrictions to lockdowns all around the world – it may not feel all that alien to us after all.

As we glean the news from various news outlets, as recently as two months ago, this would have felt improbable – more than half of the world's population is now subject to some form of restriction to battle this invisible enemy we call Covid-19.

Each development is more radical than the one before. First, we were told to wash our hands and avoid travel to the epicentre of the virus, i.e. Wuhan in China. Later we were asked to avoid large gatherings and wear masks – again some said this was unnecessary.

In early 2020, when some countries took the unusual step of restricting travel to and from China, they were labelled as alarmists. However, the responses to the virus have been more and more radical that we see a new normal every day. Let’s go back a couple of weeks ago. Imagine if I told you that in a month or two: schools will be closed. Almost all public gatherings will be cancelled. Hundreds of millions of people around the world will be out of work.

Governments will be putting together some of the most substantial economic stimulus packages in history. The talk is not of billions but trillions.

In certain places, landlords will not be collecting rents, or banks collecting mortgage payments, and the homeless will be allowed to stay in shelters provided for by the government.

Would you have believed me? I think the answer is NO.

Covid-19 has put healthcare systems to the ultimate test. Never before have healthcare workers had to respond to such a calamity. In fact, many have lost their lives as they risk everything to save people they do not know – out of their commitment to the Hippocratic oath and nothing else. It is a debt society can never repay.

Others on the front lines, jobs which were once derided – food delivery persons, shelf stackers, cashiers, cooks, e-hailing drivers, cleaners and garbage collectors – have been the unsung heroes as lawyers, accountants and entrepreneurs stay at home.

Police and army personnel have put themselves at risk too – operating checkpoints, ensuring we respect the restrictions on our freedoms that have been put in place to defeat

the virus, searching for delinquents who might have been exposed to Covid-19 but refuse to get tested, ensuring no one takes the opportunity of the lockdowns to steal or rob and merely being the best they can in horrible circumstances.

The virus has also laid bare the deformities of our societal and economic systems. We have underestimated the number of people living from hand to mouth and with all the restrictions in place, many may also lose the battle to poverty and hunger. Governments must act fast to arrest this.

This gravity of the challenge before humanity and the unprecedented response from governments all around the world confirms one thing – there will be two eras in our contemporary history, i.e. the pre and post-Covid-19 periods.

This is no understatement.

As we seek answers on how all the restrictions and lockdowns will end, none of us wants to calculate the economic, financial, social and political impact of Covid 19 because we know it will not be a pretty sight.

Despite great strides made in science and technology, we seem helpless against this enemy.

Some have relied on old medications like a malaria pill from the 1940s to battle this virus.

chosen to rule by decree.

Also, our systems of government have been put to the test. As legislatures find it impossible to meet, the executive branch of government in some countries have used the exigencies of the situations to draw on public funds to stimulate the economy in the absence of legislative approval.

Of course, a lot of this is hypothetical, but there are nonetheless points to ponder. Some will say this is a "black swan" moment, but I am not too sure of that. I have read some literature warning us that Covid-19 could be the first of many coronaviruses.

The good side of all of this is that the earth is healing. Human activity has wreaked havoc to mother nature. Rivers are clearer, the air is cleaner, and the jungles are growing.

In India, for the first time since partition, you can actually see the Himalaya Mountains from the Punjab region.

Closer to home, as we enter the 23rd day of the movement control order (MCO) that began on March 18,2020, there is a general feeling that the battle against the invisible enemy called Covid-19 has yet to be won.

We have seen how our frontliners have given everything to keep us safe; we owe it to them to stay at home.

We must thank the doctors, nurses, medical workers, cleaners, grab-delivery drivers, security guards, shelf stackers, cashiers, cooks, orderlies, restaurant owners and operators, police, army, Rela, government servants and others – who have done everything they can to keep us safe and sane over the past three weeks.

Now it is also not the time for politics; we must stand behind our government in these dark times. Our Prime Minister has led with clarity and honesty – a trait that has been absent from

our political discourse for too long.

But at the same time, we must hold those in power accountable, so there is no abuse.

We must use all our wisdom as we seek to win this battle against Covid-19 and emerge more robust and more resilient. 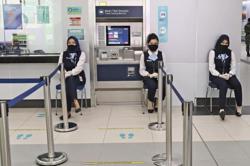