Moves that led to checkmate

Lost chance: Shafie (left) and Anwar’s tussle over who would be the Prime Minister candidate lost the Opposition its chance to gather enough numbers in support. — Filepics/The Star

THE story of how Umno vice-president Datuk Seri Ismail Sabri Yaakob put together the numbers to be chosen as Prime Minister is about basic maths. How Opposition leader and PKR president Datuk Seri Anwar Ibrahim failed to do so is all about fuzzy maths.

The maths for Ismail Sabri’s ascension to the top post began with a solid 100 MPs behind him. To get the simple majority of 111 – out of 220 – MPs in the Dewan Rakyat, he needed just 11 more MPs on his side. And those the Bera MP could easily get from among the 15 Umno MPs who had withdrawn their support for Parti Pribumi Bersatu Malaysia president Tan Sri Muhyiddin Yassin, causing him to lose majority support as Prime Minister.

In other words, Ismail Sabri simply had to hang on to most of the 115 MPs from the Perikatan Nasional government that had comprised 50 Perikatan Nasional MPs, 42 from Barisan Nasional, 18 from Gabungan Parti Sarawak, one from Parti Bersatu Sabah, and four pro-Bersatu independents.

Ismail Sabri then needed to persuade onto his side the 15 Umno MPs – led by Umno president Datuk Seri Dr Ahmad Zahid Hamidi and former Prime Minister Datuk Seri Najib Razak – who were instrumental in bringing down Muhyiddin. The talk was that those 15 had been hurting as Ismail Sabri and 22 other Umno MPs had leaned more towards Muhyiddin when he was PM than Ahmad Zahid.

A few hours before midnight on the day before all 220 MPs had to submit statutory declarations (SDs) on their choice of PM to Istana Negara, 14 MPs – the exception was Gua Musang MP Tengku Razaleigh Hamzah – agreed to back Ismail Sabri. It would be intriguing to find out what deals were struck to convince them to throw in with him.

The maths for the support for Anwar is much fuzzier.

The PKR president had previously claimed he had 105 MPs supporting him and only needed six more to become PM. The 105 MPs comprised 88 from Pakatan Harapan (which comprises DAP, PKR and Parti Amanah Negara), eight from Warisan, four from Pejuang, two from Parti Sarawak Bersatu, one from Upko, one from the yet-to-be-registered Muda, and one independent MP.

The big question was, where were the six MPs Anwar needed going to come from? Umno’s Team Zahid? Another question was whether Anwar was now an obstacle to the Opposition getting the numbers to form the government.

The Opposition could have taken advantage of the slim majority Muhyiddin had in the 17 months he was in power. But the stumbling block was Anwar’s relentless ambition that, no matter what, he has to be PM. If he had stepped aside, Pejuang and Warisan would have supported the Opposition, triggering a domino effect.

If Anwar had agreed to Warisan president Datuk Seri Mohd Shafie Apdal becoming the PM candidate, the Opposition could arguably have had the numbers to form the government months before Muhyiddin’s administration actually collapsed.

After Muhyiddin resigned on Monday, Anwar and Shafie tussled over who should be the Opposition’s PM candidate. Shafie said the gentleman’s agreement was that whoever could win over the six MPs needed would be the sole candidate.

But neither Anwar nor Shafie could bring in the numbers. Semporna MP Shafie believed that he could have done so if he had been named the candidate instead of Port Dickson MP Anwar.

“It is not easy when you do not have that initial kind of endorsement coming from that group (Pakatan). Had it been said that ‘You are the one who is going to be nominated with that particular block of votes (Pakatan’s 88 MPs)’, I could have been in a better position to say (to GPS) that this is it, this is it. Just add up a little bit.”

But actually, it seems that Shafie too, like Anwar, had not done his maths homework.

Take GPS, the coalition that rules Sarawak. The Warisan crowd assumed that they could use the sentiment of a PM from Borneo – Shafie is from Sabah – to win GPS’s support. But the assumption is wrong. As a Sabahan, I know that Sarawakians think their state is its own country and that not many there have a “romantic” view of Sabah and Sabahans.

To check my theory, I queried a GPS politician.

“Shafie must have a huge ego – after his short stint as Sabah Chief Minister maybe – to assume that Sarawak’s 18 MPs would support his party’s bid for the PM’s post with eight MPs.

“He should have talked to GPS to devise a practical strategy to obtain the more achievable DPM (Deputy Prime Minister) post for the first time since the creation of Malaysia with the two Borneo states!” was the reply.

A political analyst told me that Shafie also didn’t have a sophisticated enough team to mount a serious challenge to be PM. For example, he did not have much intel on what was happening in other parties. Shafie also faced resistance in convincing Perikatan MPs to jump as long as there was a possibility that Anwar would be the PM candidate as they have trust issues with the Pakatan chairman.

Within and outside the Opposition, it seems that Anwar exaggerated – to use a polite word – the numbers he had – they didn’t add up.

Even a few hours before the 4pm deadline to submit a name to Istana Negara, Anwar and Shafie were squabbling over who would be the PM candidate. At around 2pm Shafie conceded. But it was too late by then as most MPs had already submitted their SDs.

After the deadline and until the following morning, there was a sense of denial in the losing team. They still hoped that the 18 GPS MPs would abstain. That Ahmad Zahid, Fidel Castro and Lara Croft would retract their SDs. And Batman would vote for them....

Mind you, even with Ismail Sabri installed as Prime Minister, the politicking is not over. With just 114 MPs behind him, the Prime Minister has a slim buffer of only three MPs giving him the majority, keeping Opposition hopes alive that they might still have a chance to bring him down and form the next government.

Anwar and Shafie also might still think they have a chance to vie for the PM’s post via the vote of confidence in Parliament that the Yang diPertuan Agong has decreed must be taken as soon as possible.

But would the rakyat stand for more upheaval at this time? 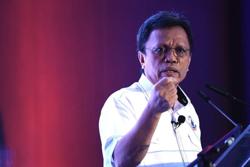