An end to one man’s ambition?

What are Anwar’s prospects now that Dr Mahathir has been officially allowed to leave his resignation date open?

AT the end of last night’s press conference, after Tun Dr Mahathir Mohamad said “terpulang pada saya” (it is up to me, referring to when he will step down as Prime Minister), Deputy Prime Minister Datuk Seri Dr Wan Azizah Wan Ismail made a touching and revealing move: As everyone was leaving, she gently patted Datuk Seri Anwar Ibrahim’s arm.

The gesture could be interpreted as a wife consoling her husband over his crushed ambitions.

On the transition of power issue, the Pakatan Harapan Presidential Council decision had come down in favour of Parti Pribumi Bersatu Malaysia chairman Dr Mahathir, which could mean that PKR President Anwar might not attain the premiership.

Some political analysts perceive the Pakatan decision as a confirmation of speculation that Anwar doesn’t have the numbers – support from at least 112 MPs out of 222 at the Dewan Rakyat – to stake a claim to the post that Dr Maha-thir had promised him during the 2018 General Election.

I asked three analysts how they interpret the decision to allow Dr Mahathir to not set a firm date for when he will step down from the premiership after the Asia-Pacific Economic Cooperation Summit in November.

Universiti Utara Malaysia political science lecturer Dr Kamarul Zaman Yusoff had expected the decision, as the coalition has a clause requiring all decisions to be consensual.

The Pakatan decision, Kamarul Zaman noted, is a clear defeat for Prime Minister-in-waiting Anwar, especially as PKR’s political bureau had pushed for a specific transition date from Dr Mahathir (as reported by Sin Chew Daily).

“I was reliably told by a Bersatu leader who attended the meeting that there were heated arguments on the issue, despite Anwar’s earlier prediction and overconfidence that the matter could be settled within just half an hour.

“The one thing that made a big difference was Bersatu’s threat to pull out of Pakatan if Dr Mahathir was pressured to decide on a specific date to step down, ” said Kamarul Zaman. 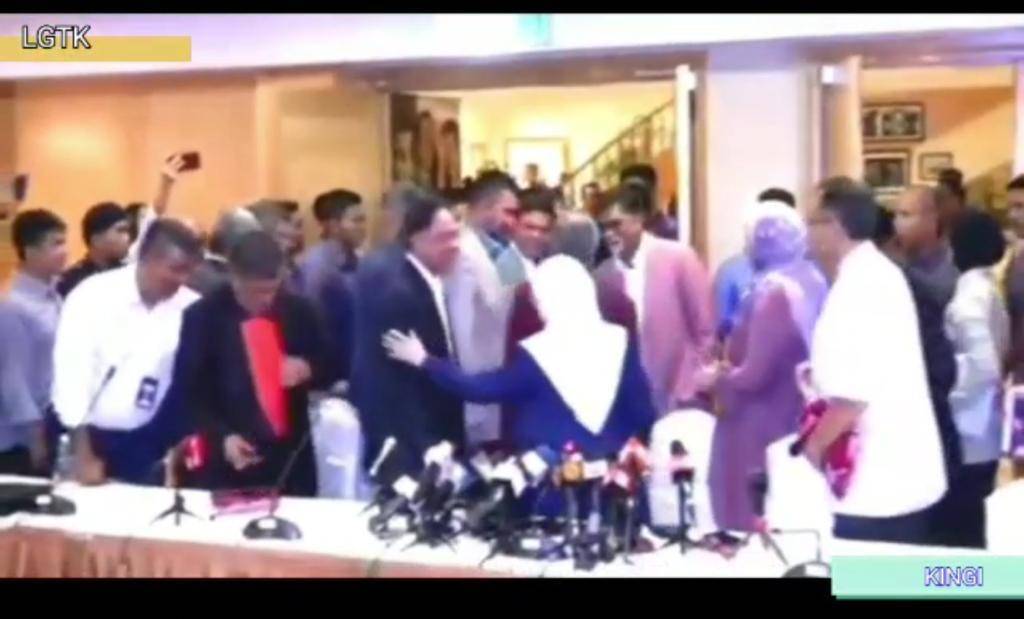 Dr Wan Azizah (back to camera, white hijab) seemingly consoling Anwar with a pat on his arm at the end of the press conference. — Screen capture from StarTV video

Universiti Malaya political analyst Dr Muhammad Asri Mohd Ali points out that many political observers predicted the meeting would end up with the status quo retained.

“With Mahathir on top, nothing will change. The decision also reflects that the Pakatan decision- making mechanism is not easy to challenge. Pakatan emphasises consensus. In normal situations, consensus will favour the incumbent, not the challenger, ” he said.

“We know that in coalition politics, every political party has its own interests. It is not easy for Bersatu to let go of the PM post because it will badly affect its future in Pakatan and in the country as a whole. This is the type of political interest that will prevent consensus.”

Shahbudin Husin, the author of Anwar PM Ke-8: Janji Serah Kuasa Yang Mesti Ditepati (Anwar The Eighth PM: A Promise To Transfer Power Which Must Be Fulfilled), said the decision is a disappointment to the rakyat and the promise to hand over power to Anwar is now made vague and uncertain.

“There is no date set and it is left to Tun to decide when to step down, indicating the failure of the Presidential Council to do something for Pakatan’s long-term stability, ” he said.

“After Apec, how do you get Tun to quit? What if Tun continues to act dumb and doesn’t want to give up? With this, Pakatan will continue to have problems and make the country unstable, the economy will not improve, and Malaysia’s dark era will last longer.”

I also asked the analysts what Anwar can do to become PM apart from just being patient.

Kamarul Zaman said there is nothing much Anwar can do to hasten the transition now that Dr Mahathir has officially been given a blank cheque to decide when to give up power.

One option is for Anwar or his supporters to initiate a vote of no confidence in Dr M in Parliament or to gather enough statutory declarations to convince the Yang di-Pertuan Agong that Anwar has enough support to become the new PM, said Kamarul Zaman.

Muhammad Asri said this proves that Dr Mahathir understands Malaysian politics better than everybody else. He knows that anyone who wants to be PM in this country needs Malay support, he said.

“And Mahathir has proven he has strong Malay support even though his party only has 26 (originally 13) out of 222 seats in the Dewan Rakyat.

“PAS has openly issued statements supporting him for a full term. Lately, we heard Umno and Barisan Nasional are also sending the same signal, ” he said

“What Mahathir is doing is copying Tunku Abdul Rahman’s formula, which is Malay-led plural politics. With the economy still in the hands of non-bumiputeras, the thinking among the Malays is that they cannot lose political control.

“This is Mahathir’s new narrative: Malaysia needs a Malay to lead it. This is what Anwar doesn’t have, ie, Malay support. He’s perceived as being closer to the DAP than a Malay party.

“Anwar has realised that situation and that is why he had no choice but to allow Dr Mahathir to decide on the transition date, ” said Muhammad Asri.

Shahbudin conceded that Anwar can’t do anything any more except be patient and wait for Dr Maha-thir to hand over power to him.

“If Tun doesn’t want to give up, Anwar can’t do anything. This has hurt Anwar and made his supporters in PKR increasingly frustrated, and making Azmin’s camp stronger in their rejection of him as PM8, ” he said, referring to PKR deputy president Datuk Seri Azmin Ali.

Lurking in the background is the threat of Pakatan Nasional, which sacked Umno supreme council member Datuk Lokman Noor Adam claimed involved everyone except DAP, Anwar (along with MPs remaining loyal to him) and Datuk Seri Najib Razak (and Umno MPs aligned with the former Prime Minister). With the Pakatan decision, what will happen to the Pakatan Nasional idea?

“With the Pakatan decision to allow Dr Mahathir to decide when to quit, Pakatan supporters claim that it will stop the Pakatan Nasional plot or the vote of confidence plot. I agree that such plots will be quashed a bit by this development, but it will not be long before they resurface again, ” Kamarul Zaman said.

“The plot is for Dr Mahathir to stay till the end of a full (five-year) term whereas last night’s decision is just for him to decide when to quit, which has to be after Apec and definitely before the end of the term, so these two things are different.

“Anyway, with so many sensitive issues and policies on the plate, serious disagreements will inevitably resurface, which will see the transition issue emerge again.”

Muhammad Asri said if he understood Dr Mahathir’s narrative, Pakatan Nasional (PN) will always be relevant and is just awaiting the right time to be formalised.

“To Dr Mahathir, PN will act like a reserve or back up player. Maha-thir knows Anwar will not stop campaigning to become PM. And in the short term, PN is a weapon Dr Mahathir can use in facing Anwar’s challenge, especially if there is a vote of no confidence in Tun in the Dewan Rakyat.”

The decision might also make efforts to collect statutory declarations in support of Dr Mahathir remaining until his term expires more active.

“Pakatan will continue to be fragile and may break up. The longer Tun remains as PM, the more chance Pakatan will break up, and this allows Pakatan National to remain a reality, ” he said.

Otai Reformasi, a pro-Anwar group, has said that if Dr Mahathir does not quit and hand over power to Anwar in May, it will unleash “Plan B”, which is taking to the streets in protest. In 1998, the group organised street protests after Dr Mahathir, during his first tenureship, sacked Anwar as Deputy Prime Minister and Umno deputy president.

Will we hear chants of “Undur Mahathir, undur!” (quit Mahathir, quit) on the streets once more? 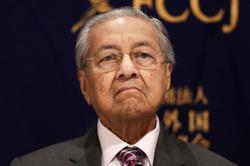 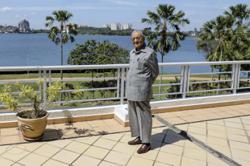 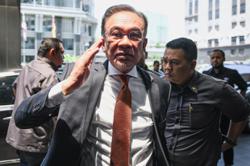