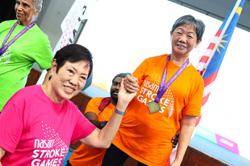 I'm going to begin the fourth anniversary article of In Your Face with a cliche - that speed kills. In most cases, that is true. However, the opposite is true in the case of a stroke - a lesson driven home when I overcame a stroke at the end of August.

And how did I learn this lesson that got me the swift medical care that saved my life? This was a lesson I learned when I interviewed National Stroke Association of Malaysia (Nasam) founder Janet Yeo for an article I wrote to help Nasam raise awareness for Stroke Awareness Day, which falls on Oct 29.

"First look at the face, the face will be a little distorted. Then ask the person to raise their arms. Strokes always affect one side, so an arm will keep falling down. Then listen to their speech and ask them to smile, if the speech is slurred and they have difficulty smiling it is time to call the hospital. And this is what I always urge people - go straight to the hospital, don't go to a clinic. Go to the emergency ward," said Yeo.

In this instance, a pearl of wisdom from an interview for a previous In Your Face preserved my quality of life and prevented me from serious brain damage as my quick action led to me receiving expert medical attention within half an hour of symptoms - before any lasting damage could occur.

Aside from this, I was reminded of a second point made by Yeo in the interview as I had heard this comment all too often since my stroke; that I am too young to have a stroke as I am in my early 30s.

On this, Yeo said that strokes are not something that adults - especially senior citizens - have to worry about as even children can also get strokes.

"Our youngest stroke survivor had a stroke in her mother's womb, but it was only found out when she was unable to turn as a baby. By the time they diagnosed her, she was nearly a year old. Today, she's going to school and learning ballet. We have a lot of survivors at our centres in their 20s and 30s," she said

Yeo added that 52,000 people in Malaysia will get a stroke every year, and according to global statistics one in every six people gets a stroke daily.

"If you look at the statistics, one in six people will get a stroke. These statistics are accurate, and this means that someone you know could very well have a stroke. It could be someone in your family or a friend. It could be you. We have to think carefully before saying that a stroke will never happen to us," said Yeo.

It would be fair to say that if I hadn't learned this from her - I might have dismissed the possibility that I was having a stroke offhand - and not sought the right treatment rapidly enough, and on that note I am also sharing links to four life lessons I've learned over the years writing In Your Face after the end of this article.

She added that strokes - which are caused when brain cells die due to an interruption in the blood nourishing our body's nerve centre - are the third largest cause of deaths in Malaysia after heart diseases and cancer and that strokes are the single most common cause of severe disabilities in Malaysia.

It was at this point that Yeo shared with me the importance of the post-stroke rehabilitation provided by Nasam through its physiotherapists, occupational therapists, speech therapists and counselors. at its nine centres nationwide

In fact, she encourages stroke survivors to live their lives fully instead of giving up because they face challenges after having a stroke.

"I want to discourage stroke survivors from thinking that they have to wait until they get better before they go out and live their lives. I tell them that it takes a long time to recover from a stroke, I had a stroke 28 years ago and I am still recovering. The moment I came home from the hospital, my husband said that I'm going out for dinner, to the market and I am going back to the office. I lived my life. I went through it and now I am preaching what I practiced," said Yeo.

"I could have been bedridden or a wheelchair user as my stroke was that severe, but my husband believed that I would rise to the challenge if he challenged me. I want stroke survivors to challenge themselves and believe in themselves," added Yeo.

Yeo added that a stroke can be seen as a challenge for a person to overcome by reinventing themselves.

"I tell stroke survivors to approach every day with a new outlook, that they're going to work and not laze around in bed. Get ready, shower, dress well and treat coming to Nasam as if they're coming to work for two hours. And what is the purpose of the work? To rebuild yourself. It is a yes I can mindset that is aimed at lifting the spirit," said Yeo.

She added that Nasam helps people develop new talents they never knew they had and believe that there's a life after a stroke.

"We have been blessed with a lot of talents, so let's move on to the next talent. We get people to see that a stroke is a turning point and to see the positive points about it - that they're making new friends and discovering talents they never knew they had," said Yeo, who added that Nasam helps about 500 people every day.

At this point I asked her how people can seek Nasam's help if they or someone they know has been affected by a stroke.

"They just call up for an appointment at any one of the centres. An appointment has to be made because we need to arrange for our chief physiotherapist to do an assessment. What will happen when they come in is that the stroke survivor will be given an introduction to Nasam and what we do, and the centre's chief physiotherapist will assess them and prescribe the program best suited to them depending on their age and the severity of the stroke so that we are more effective," said Yeo.

She also said that Nasam - contactable via email at info@nasam.org - welcomes the support of the public.

"Participate in our activities. If we're having a Stroke Games, come and cheer us on. Come and volunteer your time. When we have a public forum, come and listen. Additionally, we are starting to recruit new volunteers as we have arts, craft and music in our holistic programme. These are all the programmes we have. So be a volunteer. Teach them how to do handcraft, teach them how to do gardening. Be a volunteer," she said.

Considering that approximately 52,000 Malaysians are affected by strokes annually, I'd like to think we all have a reason to give Nasam our support. After all, if it could happen to me - who's to say it won't happen to you?

Be thankful for what you have

We can learn from our Paralympians

Are we helping people with disabilities the right way?

The face of compassion