“NAMA saya Wei Peihua dan saya pembantu anda sepanjang ekspo ini” (My name is Wei Peihua and I am your assistant throughout the expo).

I was greeted by Wei upon arriving at a hotel in Nanning of Guangxi Zhuang autonomous region for the China-Asean Expo earlier this month.

The 24-year-old is a final year Bahasa Melayu (BM) student at Guangxi University for Nationalities (GXUN).

It was a gesture from the organiser to assign students of foreign languages studies to assist the foreign media according to their national languages.

Their tasks were mainly to do translation for journalists who do not speak Mandarin, making transport arrangements, and to provide details of the various side events.

Wei is one of the 73 students undergoing BM courses at GXUN, which set a yearly intake of about 25 for the programme.

“I saw videos and pictures of the beautiful beaches in Malaysia, so I learn the language, hoping that I could get a job there,” said the Guangxi lass of Zhuang ethnicity who has chosen Diva as her Malay name.

GXUN started its Bahasa Melayu course in 2008 at the School of South-East Asian Studies.

In 2015, it set up the Bahasa Melayu Research and Information Centre in collaboration with Dewan Bahasa dan Pustaka Malaysia (DBP).

Apart from grammar and spoken language, students undergoing the four-year degree course must also learn Malaysian literature and the history and culture of the country.

In their third year, they will study at higher-learning institutions in Malaysia for 12 months before returning to GXUN to complete their final year.

But this has been temporally halted due to the Covid-19 pandemic.

“It is disappointing that I cannot go to Malaysia now,” said Syaqila Ou Huiting, 22, who was supposed to go to Universiti Sains Malaysia in Penang last year.

She has been looking forward to the trip after she discovered the uniqueness of Malaysia from watching local TV news and programmes.

“Since my second year at university, I had planned to go to many places, including Langkawi and Sabah, and try local food like satay, roti canai and bak kut teh.

“I also wish to make some friends there,” Ou pointed out.

Learning BM seems to be popular because it is easy to learn.

“It is in English alphabets,” said Ou, who adds she has a problem pronouncing the “r” sound.

Her lecturer Zhao Dan noticed this is a common problem among his Chinese students.

“They also have difficulty pronouncing words with ‘ng’ or differentiating between letters B and P as well as T and D,” he said.

He added that grammar was also another problem faced by the students.

Zhao, 33, who is undergoing his PhD programme at Universiti Malaya, decided to call himself Tuah because he admires the bravery of the legendary Hang Tuah.

He was part of the first batch of GXUN BM, and decided to stay in China to help his students improve their BM.

“I make them listen to Malay news, watch Malay programmes, follow current events and popular topics of the country,” he added.

Zhao said he came across many friendly and warm people who helped him along the way during his stay in Malaysia and this has encouraged him to further his studies in the language.

He has translated several popular Chinese collections into Malay, which include A Selection of Laozi’s Philosophies, A Selection of Tang Dynasty Poems and A Selection of Yuanqu (a type of Chinese opera from the Yuan Dynasty, 1271-1368).

Laozi is known as a great philosopher and the founder of Taoist from the Chunqiu Period (770BC-476BC). He is considered a mentor of Confucius.

The university has five BM lecturers including a foreign language expert from DBP.

Its president Prof Xie Shangguo met with Malaysian ambassador to China Raja Datuk Nushirwan Zainal Abidin who was in town for the expo.

He briefed the Malaysian entourage on the development of the university’s Bahasa Melayu programmes and activities.

Raja Nushirwan lauded the institution for offering the course and made several suggestions to enhance cooperation between the two nations including encouraging more students to study in each other’s country.

“We can translate and publish books in both languages too,” he said while offering the students to do their practical at the embassy or consulate-general offices around China. They can play the role of citizen ambassadors and work together for the benefits of both countries,” he added.

At a gathering hosted by the Malaysian consulate office in Nanning, about 40 students and officers from GXUN were treated to an array of Malaysian delicacies and learned how to make roti jala.

To express their gratitude, the students performed a traditional Malay dance and sang Sejahtera Malaysia to the audience.

Consulate-General Azlimi Zakaria encouraged the students to work hard in their studies.

“Having a good grasp of the language will help in your future career as there are more and more exchanges and collaborations between Asean, particularly Malaysia and China.

“Language is not just a tool of communication, it also reflects a country’s culture. By learning it, you will be able to understand more about the unique multiracial and multiculture of Malaysia, further promoting unity and peace among the region,” he added. 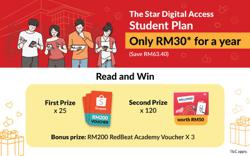