Video casts a shadow over Azmin

The beleaguered Datuk Seri Azmin Ali seems to have the support of the most influential man behind the Prime Minister but the burning question is why the police investigation into the sex video is taking so long.

THE Hari Raya open house of Datuk Seri Azmin Ali was one of the grandest he has hosted in his political career.

There were thousands of guests at his official residence in Putrajaya but notably absent were many of the top PKR figures, including party president Datuk Seri Anwar Ibrahim and Deputy Prime Minister Datuk Seri Dr Wan Azizah Wan Ismail.

The Azmin team has been seething over the sex video issue and had apparently “rescinded” – the term used by the team – invitations sent out to PKR’s power couple.

Several PKR leaders and journalists who received formal invitations to the open house were also informed a few days before the event that they had been uninvited.

The move was the talk of PKR circles because to be uninvited is unusual to say the least.

It was a rather petty and childish move but it showed how angry the Azmin team is about what they see as a plot to destroy their boss.

The video implicating Azmin in a sex tryst does not seem to have affected his appeal if the crowd at the open house was anything to go by.

But it was the presence of Tun Daim Zainuddin, arguably the most influential man behind the Prime Minister, that sent a potent signal that evening.

The low-profile tycoon, who arrived with his wife, was in one of his ill-fitting shirts that looked two sizes too big for him and which almost reached his knees.

Daim’s silence on the video issue has been read as a sign of disapproval but his appearance that evening gave Azmin a much-needed boost.

Azmin also crossed an important hurdle last week when the police established that the bank transaction documents in the video accusing Azmin of corruption were forgeries.

It would be tempting to think that the worst is over for Azmin, that the issue seems to be tapering off rather than escalating.

But this is one sex scandal that just won’t go away yet.

“Nothing ever disappears once it gets into the Internet,” said political commentator Tawfik Ismail.

The hidden hands behind the expose have been relentless, systematically releasing more videos related to the sex allegations that are aimed at shaping public opinion.

There have also been protests calling for Azmin’s resignation and labelling him a “semburit” or homosexual.

“Azmin has survived as a Cabinet member but to go a step further, that is out of the question for now,” said a political insider.

In that sense, the “vicious libel”, as Azmin calls it, may have disqualified him as a prime minister candidate in the foreseeable future.

Many have noted the lack of outrage or urgency like when Anwar was slammed with all manner of sex-related accusations 20 years ago.

“Things like the rising cost of living are more worrying to them. I sense people are also disgusted with this kind of politics,” said Khaw.

Back in 1998, Anwar came under fierce attack from the mighty Barisan Nasional while the Opposition, especially PAS, rallied to his support.

This time, the Opposition has gone to the sidelines to watch the show while those within Pakatan Harapan pretend that all is well, reluctant to judge or to show support for Azmin.

But the burning question at this point in time is the progress of the police investigation.

The impression, said Tawfik, is that the police seem to be tip-toeing around the matter.

This is a politically sensitive case and the first big test for Inspector-General of Police Datuk Seri Ab­­dul Hamid Bador since his appointment.

He probably does not wish to make any missteps and has promised not to pressure the special taskforce set up to look into the case.

Azmin loyalist Dr Afif Bahardin has urged the police to also investigate the mastermind behind the accuser Haziq Abdullah Abdul Aziz, who is clearly not acting alone.

“We must identify who is behind it. These are dangerous people especially if they are bidding for power,” said Afif, who is also a Seberang Jaya assemblyman.

The police have kept a tight lid on their probe, including the all-important question of whether the video is authentic or a deepfake.

The veil over the investigation has also generated all kinds of rumours, including claims that there will be a cover-up.

The fact that the Prime Minister has pre-empted things by saying that he does not believe the allegations and declaring the video fake does not make things easy for the investigators.

Those critical of the way the issue is being handled complain that Dr Mahathir has unfairly set the tone and that his statements are the soundbites that people will remember.

“Who would dare go against the narrative of the No. 1?” said a PKR division chief.

As of now, even the most seasoned of politicians are unable to predict how this issue will turn out.

What is clear though is that it has dented Pakatan’s image.

The ball is at the feet of the special police taskforce. 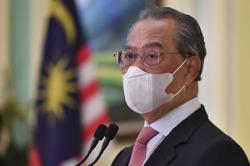 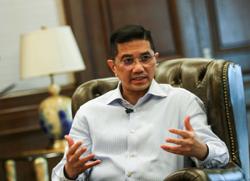