Expect the unexpected from Dr M

IT has been no less than a spot on centrestage for Tun Dr Mahathir Mohamad as the ruling coalition marked its one year in power.

He was the man that everyone wanted to hear from.

The Prime Minister’s own popularity rating is down and he had rated his Cabinet only five out of 10, but the way Dr Mahathir took charge of the narrative of his government’s maiden performance suggests he is very much in charge. Pakatan Harapan would be on even shakier ground without him up there.

As Karim Raslan, author and CEO of KRA Group, told a radio show: “For as long as Dr Mahathir is able and willing to, his voice is very important for Pakatan Harapan.”

But few issues have defined the second coming of Dr Mahathir than how he has taken on one of the most powerful royal families in the country.

No other Prime Minister in history has ever dared to do anything like that when it comes to the palace, although one might add that he has some experience in this field.

The popular opinion, once upon a time, was that a Malay politician who incurs the wrath of the Sultan is a dead man walking.

Dr Mahathir came under fire in the 1990s when he amended the Constitution to remove certain immunities enjoyed by the royals, but he survived, largely because Umno was then very strong and powerful.

Although he is now leading a coalition where non-Malay MPs comprise more than 50% of his coalition, it has not stopped him from starting another battle royale, this time with the Johor royal house.

His war of words with the Johor palace has left both admirers and adversaries astounded, appalled and fascinated at the same time.

“It’s very confusing for me. Pakatan needs more Malay support, I’m not sure that quarrelling with the palace is going to help,” said Kelantanese Syed Azidi Syed Aziz, an aide to Datuk Mustafa Mohamad.

No prime minister has ever openly called a royal figure “stupid” or asked him to shut up.

It has also left Malay politicians in Pakatan, especially those from Johor, frozen with fear, unable to say a word, be it to defend the palace or to support Dr Mahathir.

“Don’t quote me” or “no comment” was the most heard response from politicians on the issue.

None of them want to be trampled in the fight between two giants.

It has made things particularly sensitive for the new Mentri Besar, Datuk Dr Sahruddin Jamal, who now has to tip-toe around his Sultan and his political boss.

Dr Mahathir’s verbal exchange with Tunku Ismail Sultan Ibrahim, or TMJ as he is known, only cooled down because of the fasting month as both sides restrain themselves.

TMJ’s Twitter account has been full of visits to one Ramadan bazaar after another where he is mobbed for selfies.

He may be a “little boy” in the eyes of Dr Mahathir, but he is a hero to his subjects.

“He is going to the ground, doing the hearts and minds thing,” said Syed Azidi.

Political commentator Tawfik Ismail said it is common knowledge that the Sultan is not easy to deal with. But the latest feud, said Tawfik, has also become very personal.

“What’s happening is good in making people think about the kind of rulers they want and to define the boundaries of state and federal powers,” he said.

However, Tawfik, who is from Johor, sees the Sultan as crucial in maintaining the moderate influence in Islam.

“No other Sultan has come out so openly to ensure that the moderate element in Islam is upheld,” he said, pointing to the controversial Muslim-only laundry shop issue as an example.

Not all Johoreans approve of the excesses of the royal family but most Johoreans agree that their Tuanku stands up for the people of Johor.

Dr Mahathir’s current spat with the Johor palace actually began months before the general election, when he began his campaign against Datuk Seri Najib Razak whom he accused of selling Malaysia to China.

He had singled out the mammoth Forest City project, which had links with the royal family, as an example of the sellout.

But all seemed sunshine and everything nice after Pakatan took over in Johor until the palace spoke out against the Rome Statute.

The rift worsened over the mentri besar issue and the reshuffle of the state exco, and a war of words ensued between the palace and the Prime Minister. Every jibe, accusation and insult was played out in social media and by a less restrained media.

But it is tough to challenge the powers of incumbency of the Prime Minister.

Mid-way through the exchange of words, Dr Mahathir pulled out his trump card, revealing that a plot of land along the proposed Rapid Transport System (RTS) had been quietly transferred to the palace. In a game of chess, it would be known as checkmate.

The Sultan’s response was that he was unaware of it but offered to return the property for free if the RTS project was immediately implemented.

The matter is at a stalemate for now but it is a stark reminder that you do not want to “play-play” with Dr Mahathir.

Despite his tendency to “forget” inconvenient truths, he is as shrewd and strategic as ever, with the memory of an elephant.

For instance, when TMJ said the Prime Minister should be replaced, Dr Mahathir reminded the young prince that he was almost replaced as the Crown Prince several years ago.

A recurring flash point between the government and palace in many states has often been over the appointment of the mentri besar.

The mentri besar job sounds so grand but Tawfik recalled how a Johor leader had to “chase” the then Sultan around the state to approve him for the post. It was said that another mentri besar was often treated “like an office boy” by the then sovereign.

Some insiders have suggested that Dr Mahathir wants to redefine the political boundaries between palace and government, especially when it comes to the appointment of the mentri besar.

Those who understand the meaning of a constitutional monarchy are with the Prime Minister on this. The people’s will, they say, must take precedence.

Fortune magazine, which ranked Dr Mahathir as the 47th greatest leader in the world, described him as “currently writing an unexpected chapter in his history”.

Well, expect more of the unexpected from Dr Mahathir in his ties with the royals.

“It has been a quiet Ramadan so far but I think things will get noisy again after Hari Raya,” said Syed Azidi. 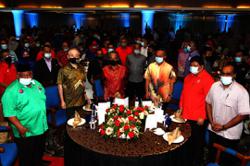