Royal factor: The Sultan of Johor is riding a popularity wave and the palace seems to be taking a clear stand on Johor’s politics. Picture shows the big welcome for the Sultan of Johor when he arrived in a special limousine for the annual Chingay parade last year.

A week is a long time in politics and what a week it has been in the politics of Johor – from the Crown Prince’s controversial statement on the politics of his state to the chaotic supermarket run on Wednesday night.

The Johor palace which has been closely watching the unfolding political developments seems to have stepped up its game. And it is a game where the royals set the rules and the rest of us watch on, not quite understanding how the game is played.

Although Tunku Mahkota Johor Tunku Ismail Sultan Ibrahim or TMJ as he is known, said that his statement on Johor politics came from his heart, the perception was that he would not have acted without his father’s blessings.

All this has to be seen in the context of the image of the Sultan of Johor. His popularity is at an all time high, he has built up a reputation as the people’s Sultan and everywhere one turns in Johor Baru, there are billboards declaring, “Daulat Tuanku”. Teo: Failed to rise up to her own battle cry to wipe out MCA.

TMJ’s controversial statement was one of those game-changing situations and it has forced political players in Johor to reassess their strategies and focus.

Although the palace angst seems to be aimed squarely at Tun Dr Mahathir Mohamad, it affects the rest of Pakatan Harapan given that he is their Prime Minister nominee.

“The palace signal could not be clearer, it was like a sharp spear. How do you react to that?” said a DAP politician.

According to the DAP politician, it might impede the Malay momentum that Pakatan needs in Johor and it has complicated DAP’s push to win more seats and make inroads into the mixed seats.

“Even people who have warmed up to us, they will be asking themselves whether there will be a confrontation with the palace when it comes to appointing the MB,” he said.

But even without the palace factor, DAP had encountered problems in its grand design to wipe out MCA in Johor. The plan to move their big names to difficult seats in Johor and elsewhere has not been smooth. The strategy was to pitch their big names against counterparts from MCA and Gerakan or what DAP leaders termed a contest of “king fight king”.

However, not many DAP big names were willing to risk it, with several of them indicating they will only move to seats where they can be assured of winning.

To date, only Kluang MP Liew Chin Tong has taken what is seen as a real plunge, venturing into Ayer Hitam to take on the MCA deputy president.

Ironically, the biggest fight may be in Perak rather than in Johor. Perak DAP chairman Nga Kor Ming is expected to take on Gerakan president Datuk Seri Mah Siew Keong in Teluk Intan. His star in the party will rise if he beats Mah.

Kulai MP Teo Nie Ching who raised the battle cry to wipe out MCA – she used the term “wei jiao” (annihilate) – has backed away from taking on MCA vice-president Datuk Chua Tee Yong in Labis. 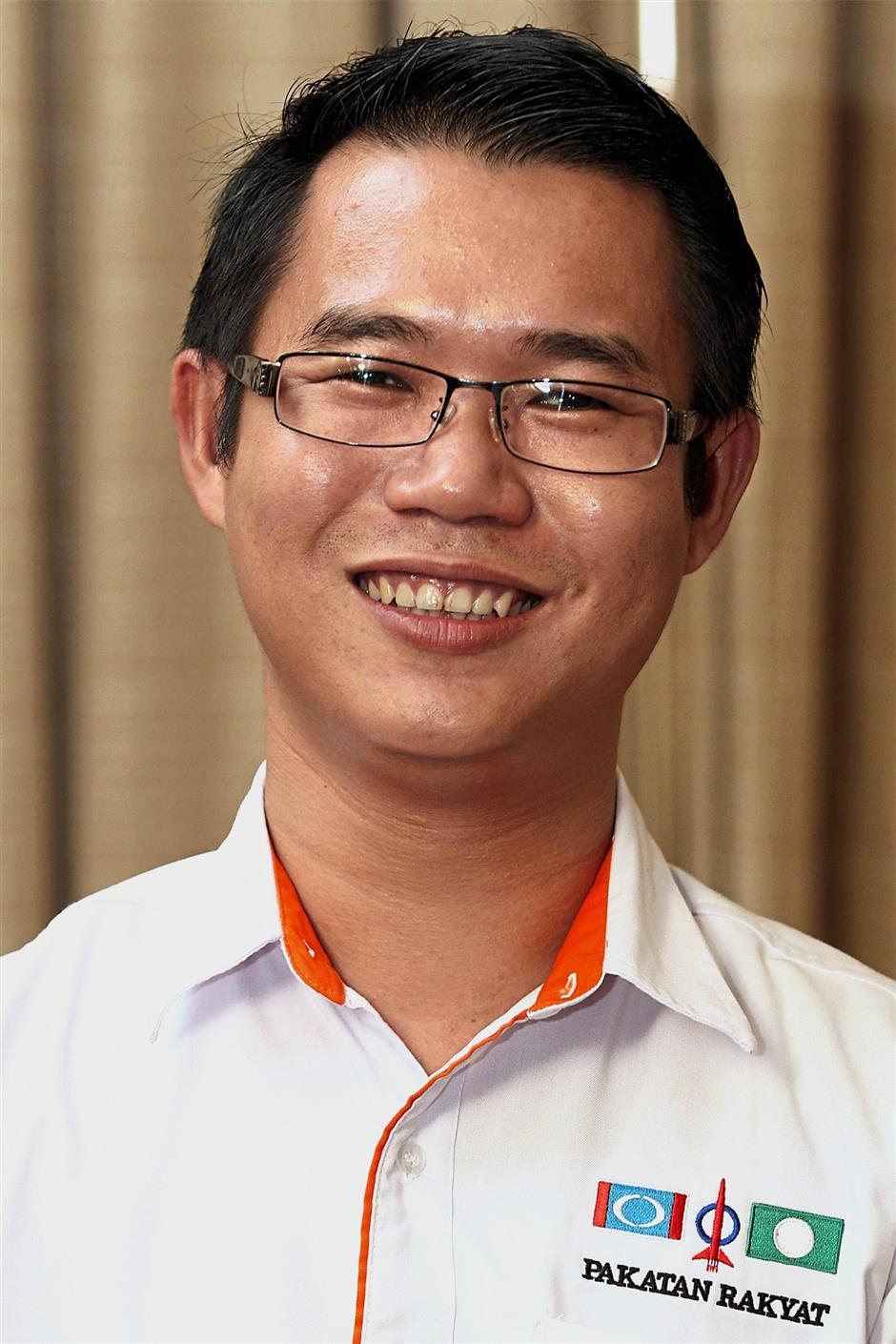 Tan: Criticised for trying to push his former sifu out of Skudai.

Gobind Singh Deo, the son of the late Karpal Singh, is also reluctant to leave his Puchong seat. He was asked to consider Labis but after checking out the constituency, he decided against it.

The DAP leadership had also tried to make Skudai assemblyman Dr Boo Cheng Hau go to, first, Ayer Hitam and then Labis. Lim Kit Siang had personally met Dr Boo to persuade him but Dr Boo’s view is that the party should have given him more notice so that he could have carried out some political programmes instead of just parachuting in.

He has insisted on remaining in Skudai where he managed to maintain the people’s support despite being sidelined by the DAP leadership.

Dr Boo’s former protege Tan Hong Pin, who is Mengkibol assemblyman, recently posted an open letter on Facebook pressing Dr Boo to take a risk and make a sacrifice for the future of the party.

Tan said he was willing to give up his Mengkibol seat and go to Skudai. That upset Dr Boo’s supporters who slammed Tan for betraying the man who used to be his sifu.

The fact that Wong Tack is again contesting in Bentong against MCA president Datuk Seri Liow Tiong Lai suggests that DAP is unable to live up to its “king fight king” objective.

Wong was a sensation in 2013 when he projected himself as a passionate environmentalist before falling off the radar screen.

He cannot compare to what Liow has brought to Bentong and putting Wong against the MCA president makes the battle elsewhere less convincing.

There are several other reasons as to why the DAP offensive in Johor may have backfired. Nga: Expected to take on Gerakan president in Teluk Intan.

The Chinese do not agree with the idea of wiping out MCA which has played a significant role in sorting out Chinese issues and providing the link between the government and SMEs and other businesses.

The community, especially the business sector and Chinese guilds and associations, have expressed concern about a move that will see “Chinese kill Chinese”.

But wasn’t that what the Chinese voters did to MCA and Gerakan in the 2013 general election?

The thing is that in 2013, Chinese voters were told that they were voting against Umno but the end result saw the Chinese almost wiping out MCA and Gerakan candidates.

This time, it was a direct pitch to finish off MCA and it did not go down well with community leaders, they do not support the strategy to wipe out MCA.

Some of them have asked why they should kill off Dr Wee who has championed Chinese education and spoken up on Chinese issues. They see him as a capable leader.

They feel that they are being asked to choose between “fish and bear’s paw” or “yu yu xiong zhang”, a classic Chinese saying denoting a difficult choice between two rare delicacies during China’s imperial era.

It is not like gambling, where you can bet on both Sports Toto and 4D at the same time.

Those critical of the strategy said it was conceived by an elite group in the party who did not brainstorm before deciding to implement it.

The plan was also viewed with suspicion by some who perceived it as a scheme to get rid of people who are not aligned to the powerful Lims.

The DAP offensive was also supposed to be complemented by its partners. DAP, said the above party politician, had hoped that big names like Tan Sri Muhyiddin Yassin, Nurul Izzah Anwar and Mohamed Sabu would move south to lend their clout.

As Pakatan’s Mentri Besar candidate, Muhyiddin ought to be taking on Datuk Seri Khaled Nordin in Kempas and Pasir Gudang. But the former Deputy Prime Minister is contesting in Pagoh as well as the Gambir state seat.

Mat Sabu has opted for a safe seat in Kota Raja, Selangor, while Nurul Izzah is eyeing a safe haven in either Permatang Pauh or Pandan.

The Malay partners failed to rise to the occasion and that is why it is difficult to convince people that a Malay tsunami is on the way. With DAP alone playing the strongman politics has also sent the wrong signal to the Malays in Johor.

Aiming to capture Johor was a high-stakes game and DAP seems to have under-estimated the distrust that the Malay rulers have for Dr Mahathir. It was quite a blow to be labelled a “fork-tongued individual”.

It is too late to back off.

“When you beat the war drum, you’ve got to charge ahead or else the urge to win will be deflated,” said the above DAP politician, borrowing from the ancient Chinese strategist Zhuge Liang.

Perhaps the most curious aspect of DAP’s “king fight king” strategy is that only the second liners are being sent to the battlefront, while the top guns are staying put in areas where even a banana tree would have won as a DAP candidate.

It gave the impression that the top leaders were not willing to do or die.

But those who have been studying Lim’s politics over the years think the Gelang Patah MP may have a surprise up his sleeves. They cannot believe that DAP’s most powerful figure will take the easy way out and remain in Gelang Patah which he won with a majority of more than 14,000 votes.

Speculation that he would risk it all in Johor Baru seems to have petered off. Some thought he would go to Bentong but that is now also out of the equation.

A new round of speculation has begun over where Lim will go. Will he stay put in Gelang Patah or will he head north?