Too much drama: It is a headache for Anwar (second from left) with Khalid Ibrahim (far left) refusing to budge while Khalid Samad (third from left) got a dressing down from the Sultan.

Datuk Seri Anwar Ibrahim's plan to make his wife the next Selangor Mentri Besar may pitch Istana Kayangan against 'Istana Segambut' given that the Palace is uncomfortable with the idea of a woman on top.

AZMIN Ali left for Mecca on Monday. His supporters said he is seeking divine guidance after the fight for his political survival in PKR.

At around this time last year, he had reconciled with his mother, going down on his knees to seek her forgiveness before leaving for the umrah.

The mother-and-son estrangement had been over their differences regarding Datuk Seri Anwar Ibrahim. Their relationship has stayed on track although Che Tom, as she is known, remains critical of Anwar. Azmin should have known that mummy knows best, given how Anwar double-crossed him in the PKR election.

The PKR deputy president will be back by Hari Raya. The party election has been like a political version of Amazing Race Asia and despite all the obstacles thrown before him, Azmin managed to retain his deputy president post.

He is on much more solid footing today than ever before. But is he any nearer to the post he has always wanted?

Banners congratulating Azmin as the incoming Mentri Besar have been spotted in several parts of Gombak. This has not gone down well with supporters of Tan Sri Khalid Ibrahim who see it as disrespectful and presumptuous. Azmin: Seeking divine guidance in Mecca after a tumultuous election.

Azmin’s boys denied having anything to do with the banners and claimed it was the work of Khalid Ibrahim’s supporters, trying to paint Azmin as an impatient leader.

“We wouldn’t stoop so low as to praise him by the roadside. Why would we want to put up banners in his own backyard? We are not stupid,” said one of them.

The reality is that the Mentri Besar seat remains elusive where Azmin is concerned.

PKR circles have been throbbing with speculation that Datuk Seri Anwar Ibrahim is pushing ahead to put his own wife Datuk Seri Dr Wan Azizah Wan Ismail as Selangor Mentri Besar.

The party’s political bureau meeting on Wednesday affirmed that the Kajang Move – the euphemistic term for changing the Mentri Besar – is on track.

In other words, it is now a party decision that Khalid Ibrahim has to go. It was following the political bureau meeting that Anwar declared “no one stays forever”.

The meeting also named Dr Wan Azizah as the candidate to replace Khalid Ibrahim. It is significant that she was the only name floated.

A PKR insider said Anwar had met Khalid Ibrahim to tell him that “change is imminent”. But it was unclear whether the latter agreed to go willingly or would continue to resist.

Anwar is bringing everything he has to push for the change. He is not bothered that Khalid Ibrahim had earlier said he would stay till the end of his term or that the Palace and religious bodies in the state are not keen on a woman Mentri Besar. 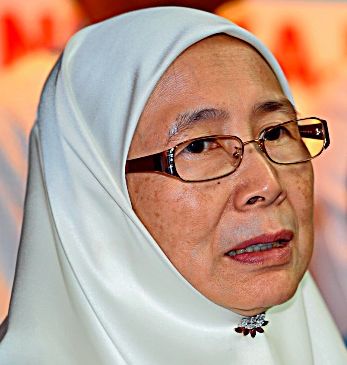 “Istana Segambut”, as Anwar’s Segambut residence is known, is about to go head-on with Istana Kayangan, the Selangor Palace.

At a recent meeting between Datuk Seri Hadi Awang and PAS-elected representatives and leaders from Selangor, there were mixed views about whether Khalid Ibrahim should stay or go. One group wanted Khalid Ibrahim to be replaced, another was for him to stay on while a third group felt that if the party cannot make a bid for the top post, he should be allowed to continue.

No conclusion was forthcoming although Hadi listened closely to all views. Party insiders said that ultimately, the post belonged to PKR and the party would have the major say. The other parties are likely to come along for as long there are no major issues concerning the chosen candidate.

It will be a major development if PAS goes along with a woman at the top. PAS politicians do not even shake hands with women and many of their ulama are reluctant to look women in the face when talking to them – especially women who do not cover their aurat.

The final decision will be made at the Pakatan Rakyat presidential council after Hari Raya.

Khalid Ibrahim’s political fortunes have see-sawed like crazy – one minute he is down, the next he is up and then he is down again.

Quite surprisingly, Khalid Ibrahim still enjoys a good image among Selangorians despite the water crisis and other development issues.

Wan Ismail, now 89, said the people’s views regarding the Mentri Besar issue should be taken into account and the best way was through a survey.

Khalid’s people have quickly interpreted it as Wan Ismail speaking on behalf of the daughter whom he loves and supports. They claimed that Wan Ismail knows that his daughter, 61, is not keen on the job and may not be up to the rigours of being Mentri Besar.

Regardless of whether Dr Wan Azizah is interested or not, she is at the head of the line for the job.

The ongoing drama over the Mentri Besar post has become the most contentious power struggle Selangor has ever seen. Every little thing is exaggerated into something else.

They were the VVIPs at the function and protocol called for the Prime Minister and Mentri Besar to be seated at the main table and praying at the centre-front row. But Khalid Ibrahim’s detractors portrayed him as on the brink of jumping ship.

A week later, it was another Khalid who was in the news. Shah Alam MP Khalid Samad, the non-conformist politician from PAS, got a public dressing down from the Sultan of Selangor during the opening of the Mesjid Pekan Sepang.

The Sultan was very unhappy with Khalid Samad for asking the state government to abrogate the executive powers of MAIS or the State Islamic Council.

Khalid Samad, still upset over the Bible seizure issue, had asked Pakatan to exercise its two-thirds majority in the State Legislative Assembly to amend the Islamic enactment governing MAIS.

MAIS is an advisory body to the Palace on Islamic matters and Khalid Samad ended up stepping on the toes of MAIS as well as that of the Palace.

Moreover, Khalid Samad is known to detractors as “hero PAS bertopeng DAP” (a PAS hero wearing a DAP mask) and he is part of the anti-Khalid Ibrahim faction.

The fact that the Sultan did not refer to Khalid Samad as Yang Berhormat despite mentioning his name a total of five times was a sign of just how upset Tuanku was that a fellow Muslim would want to clip the wings of a body meant to safeguard the interests of Muslims in Selangor.

What is the significance of the Sultan’s speech on the drama surrounding the Mentri Besar post?

Khalid Ibrahim’s troubles started with the Bible issue. The liberals and the Christian lobby in Pakatan, and especially in DAP, were outraged that Khalid Ibrahim could not use his clout to secure the release of the Bibles. He became the fall guy for the issue.

Tuanku’s speech was essentially a no-nonsense defence of Islam and the bodies that administrate the religion in the state.

But the speech also carried a veiled warning to those attempting to replace Khalid Ibrahim that matters of religion are not to be used as political capital by politicians to get what they want.

Tuanku’s reminder that the mosque and surau are for Muslims and Malays was not only about non-Muslims using the venue for purposes other than religion but a veiled notice to non-Muslims attempting to have a say on Islamic affairs and administration.

The wheels for change have been set in motion, with Anwar being the prime mover.

The PKR leader is the consummate politician and his aim over the next couple of weeks is to get all three parties to endorse Dr Wan Azizah as Mentri Besar so that the Palace has no choice but to accept her candidature.

No one doubts his ability to get the Pakatan leadership around to his way of thinking. The Kajang Move is about to be realised although in a distorted way.

Not everyone in the party will be happy but they will come along even though they know that the Kajang Move has damaged the party’s image inside and outside Selangor.

The grand plan will reportedly climax after Hari Raya. It will be a happy Hari Raya for some in PKR and a miserable one for others.