Take a good look in the mirror

By The Barisan Nasional, Like All Other Parties, Needs To Be On The Cutting Edge Of Critical Thinking Under The Dramatically-altered Political Landscape. But First, It Must Step Out From Its State Of Denial and Grow Up.

ALONG THE WATCHTOWERBY M. VEERA PANDIYAN

NASI sudah menjadi bubur (The rice has turned to porridge). This timeworn Malay saying sums up the situation faced by the once-omnipotent Barisan Nasional.

But it’s a wonder why some people still don’t seem to get it. Listen, the porridge has turned gooey and unpalatable, so stop trying to dish it out.

It doesn’t take a genius to give the obvious advice: Get over it. Move on. Do something quick before the kitchen crumbles.

As the spine of the coalition, the onus is on Umno to kick-start the changes needed.

But first, it must step out from the only state it has secured after the March 8 general election: the state of denial.

Given the abrupt loss of so much power, the tendency for such a stance is understandable. Denial, after all, is a mental medium designed to overcome emotional conflict by shutting out the unpleasant aspects of reality. 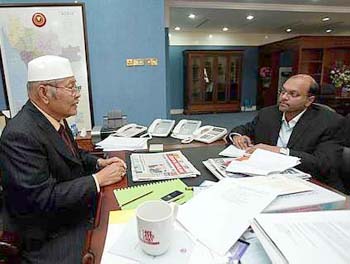 Full of zest: Azizan responding to questions from The Star’s journalist Paul Gabriel during a Cafe Latte Chat session at the MentriBesar's office at Wisma Darul Aman, Alor Star, on Monday.

Sigmund Freud described it as a “primitive defence mechanism” in his psychoanalytic theory. His daughter Anna Freud, who also studied the syndrome among children, observed that the mature ego would know when to stop making extensive use of it.

In other words, it’s time to grow up. The Barisan Nasional, like all other parties, needs to be on the cutting edge of critical thinking under the dramatically-altered political landscape. It must be willing to challenge outdated beliefs and ideologies, not stubbornly protect them.

The emerging leaders in PKR-DAP-PAS coalition, now known as Pakatan Rakyat, appear to have accepted this, although the fixation with racial quotas for posts still seems to be prevalent.

PAS seems to have made the most strides, as reflected by the mien of its representatives like Shah Alam MP Khalid Abdul Samad, who visited a church to thank voters in one of his first public appearances after being elected. The marvellous debut of the new Mentri Besar of Perak, Mohammed Nizar Jamaluddin is another example.

Rising leaders of the DAP too, have shown that they are no longer perturbed by PAS’ previous pre-occupation with the Islamic state agenda. They are comfortable working with the younger, reasonable voices committed to today’s pragmatic politics.

Kota Melaka MP Sim Tong Him, a veteran lauded for his speaking as well as singing voice, described it aptly during a dinner hosted by party secretary-general and Penang Chief Minister Lim Guan Eng for close friends in Malacca last Sunday:

“It’s now okay to sing Yeh Liang Tai Piau Wor Ter Sin (The Moon Represents My Heart) during political functions”. (In the past, MCA and Gerakan leaders used to quote the Teresa Teng classic when poking fun at the DAP’s then embarrassing ties with PAS.)

So, what should the Barisan leadership, starting with its president and Prime Minister Abdullah Ahmad Badawi do? To borrow the words he used against Umno veteran and potential challenger Tengku Razaleigh Hamzah, it should begin by “cermin diri” (looking in the mirror). An honest reflection would reveal the answers.

The Prime Minister’s critics within Umno should also do likewise. As Abdullah pointed out on Monday, former PM Tun Dr Mahathir Mohamad, for example, cannot deny that he bears much of the blame for the erosion of confidence in Malaysia’s judiciary.

He should also be accountable for the harsh Operasi Lalang crackdown against the Opposition, Chinese educationists, civil rights and labour leaders and for the dumbing down of the country’s media.

For those too young to remember, the publication permits of The Star, Sin Chew Jit Poh and Watan were suspended, leaving journalists jobless for five months from Oct 27, 1987. The eventual subservience of the media to the Government via a blend of self-censorship and intimidation could rightly be traced to this dark era of the country’s history.

The sacking of then Lord President Tun Salleh Abbas, Umno’s not-so-democratic rules, such as the 30% quota of support of divisions needed for a presidential contest, the conversion of Terengganu’s oil royalty into the easily abused Wang Ehsan payments, could also be attributed to the former PM. As such, he too, should be big enough to admit his own costly blunders.

But it is downright witless to continue to harp on Dr Mahathir’s past wrongs for the country’s current problems. His tongue may remain sharp but his rule is long gone. The people gave his successor their massive mandate in 2004, largely because the bad old days were over and done with.

Yet, despite the awesome array of promises, all the basic flaws have remained un-dismantled. And many of the tainted politicians are still part of the administration.

The Barisan must squarely face the reasons voters decided to clobber the coalition on March 8. Its leaders must also come to terms that Malaysians had evolved politically and so must they.

Psychologist Edward Boring observed that some people are unable to readily overcome certain limitations in the progress of thought. They may modify and revise with the utmost honesty, but the further they go on the less able they are to change direction radically.

It is this psychological law of inertia that Umno and Barisan leaders must overcome. It would be suicidal to linger within expired paradigms when the fissures of collapse are already gaping.

Malaysians are already seeing the shades of the big picture ahead – the inevitable two-party system of government. With the Barisan's future hinged on this likely future scenario, rebuilding and rebranding must be swift, for there is so much to do.

For a start, it has to look beyond a strategy based only on hope that the Pakatan Rakyat would eventually rend itself apart because of ideological differences.

The alternate coalition has tasted power and would do whatever it takes to win over new believers, as could be seen by the populist policies in Perak, Selangor and Penang.

It looks like a tough road ahead for the Barisan but it still has a chance to show that it can transmute and do a better job at governance. It must begin now to meet the wider expectations of the young and more informed voters in the next general election.

One of the coalition’s immediate tests for the new era of Malaysian politics would be the selection of the next Speaker of the Dewan Rakyat. With 82 Pakatan Rakyat MPs facing 140 Barisan representatives when the new Parliament session begins on April 28, the choice would have a great bearing on things to come.

Malaysians expect the new Speaker to be both firm and fair in making decisions and in allowing their voices to be heard through their MPs. The leadership’s correct pick of such a personality would go a long way towards restoring the dignity of the Dewan Rakyat and nurture our renewed hope in democracy.

M. Veera Pandiyan, Deputy Editor, New Media wishes to share this truth opined by Nelson Mandela: The great lesson of our time is that no regime can survive if it acts above the heads of the ordinary citizens of the country.

The Barisan Nasional, like all other parties, needs to be on the cutting edge of critical thinking under the dramatically-altered political landscape. But first, it must step out from its state of denial and grow up.