Like the One Ring in 'The Lord of the Rings', political power and money have become uncontrollable and corrupting in Malaysia. —.Enterpress_Nlc/New Line Cinema/Enterpress/dpa

If Anwar Ibrahim became PM based on support from the likes of Najib Razak or Zahid Hamidi, would he still be the Anwar we knew? Would such a government be stable?

OUR political system makes it perfectly legal for MPs to change their allegiance and effect the collapse of one government in favour of another at practically any time.

This political system, legally speaking, has no way of stopping this from happening an infinite number of times in a period of time however short.

In theory, between the time I write this sentence and you the reader read it, we could have changed Prime Ministers 17 times – or 17x17 times for that matter.

The Lord of the Rings oversimplified a great many things in a way that possibly did more harm than good.

That observation was about the nature of power. Tolkien’s One Ring is an inanimate object, an embodiment of power. My biggest, most enduring takeaway from The Lord of the Rings is that power bends people to its will, not the other way around.

The more power is involved, the greater the irresistible gravity it exerts on the behaviour of everyone around it.

Coming back to the Malaysian context, I would argue that as long as politicians are able to pursue greater power and money by threatening to change the government, they will continue to do so. Such is the irresistible gravity of power and money.

Our current predicament has its most recent roots in the Sheraton Move.

This is of course not the first time such a takeover has happened. In more recent times, the government of Perak fell in a similar way in 2009.

As an interesting aside, it was this political crisis that introduced the legal precedent stating that a head of state has the legal authority and discretion to remove the head of government if the former is convinced that the latter has lost the legislative majority.

The Sheraton Move however marked the first time that such a takeover has resulted in months of cascade effects.

A few other state governments fell following this realignment of power. In the case of Sabah, state-wide elections were triggered, which in turn arguably triggered a massive second wave of the Covid-19 pandemic in both East and West Malaysia.

Months after the Sheraton Move, everyone is still a kingmaker – and everyone dreams of being king.

Every man is out for himself, looking to exploit the situation so as to cut the best possible deal he can for himself.

The current Prime Minister ensured that almost every single MP who supported his government was rewarded with some sort of prominent position in the government or in a GLC.

The situation he is in is a little bit akin to blackmail however; a blackmailer will seldom accept a one off payment and go away forever. Why should he? As long as the blackmailer has something over you, it is only logical that he will continue to come back to you for more and more.

Should there be a change in government, there are important lessons here for the next PM.

Will the people who have abandoned the current PM be forever loyal to you? Or will they, the minute they feel they are not getting a big enough piece of the pie, threaten you in exactly the same way that they are threatening the current PM?

Under our current political system, and given the current makeup of our Parliament, it is extremely difficult to imagine anyone becoming PM without being held hostage in this manner.

Some say the answers are in fresh elections. Sabah was ‘lucky’ in this regard, because the margin of victory was big enough to stave off any further instability. That is in no way a guaranteed result of any election.

It took the UK multiple general elections over multiple years before they were able to solve the Brexit dilemma. Is that what we want? (And again, the UK was ‘lucky’ that Boris Johnson won a sufficient majority in the end; that was again in no way a guaranteed outcome.)

The most common ride on a merry-go-round is a horse, and on this carousel we currently find ourselves on, it is unlikely we will see an end to the horse trading.

And when that many horses have been traded back and forth, it is safe to say that principles, values, and ideology are now playing absolutely no role whatsoever in shaping the direction and governance of the nation.

In their place are individuals who would do anything, and make any compromise, in order to obtain power.

Just imagine for an instance, what it would look like, if Anwar Ibrahim became Prime Minister on the backs of support from individuals like Najib Razak or Zahid Hamidi. Would he still truly be the Anwar we once knew?

If I were to start talking about an ‘overhaul’ of the system, many are likely to start rolling their eyes, opining that such plans are pipe dreams that are too far off in the future.

I believe the future is now though, and that more and more Malaysians are realising that the problem isn’t just the politicians, but the incentive structures, system design, and centres of gravity in the ecosystem that politicians currently operate in.

If we fail to dig deep and start work on changing those structures, then we will be trapped forever, going in the same circular merry go round; the various horses rising and falling in turn, but ultimately always stuck on their same poles, never moving, except in a circle.

Nathaniel Tan is a strategic communications consultant. He can be reached at nat@engage.my. The views expressed here are solely his own and do not necessarily reflect those of Sunday Star. 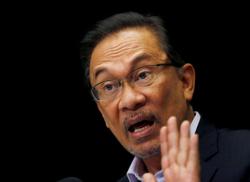