PARIS (Reuters) -The Paris Court of Appeal on Thursday rejected an appeal against a life in jail sentence filed by an Islamist militant who opened fire aboard a high-speed train travelling through northern Europe.

Moroccan national Ayoub el Khazzani was heavily armed when he launched his attack moments after the Thalys train crossed into France from Belgium on Aug. 21, 2015. He was overpowered by three Americans before he killed anyone.

"The court considered that the statements you made at the hearing (...) raised doubts as to whether a genuine process of self-examination had been undertaken", one of the judges told el Khazzani as he read out the verdict.

The court added the man would spend at least 22 years in prison without parole.

A Paris court in December 2020 had found the defendant guilty of attempted murder with intent to commit terrorism.

El Khazzani and his lawyers now have five days to decide whether to make a final appeal against the sentence before France's highest court. 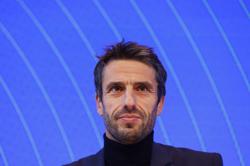