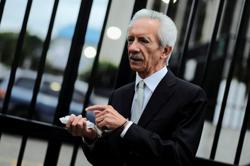 GUATEMALA CITY (Reuters) - A Guatemalan court on Wednesday found former President Otto Perez and his vice president, Roxana Baldetti, guilty in a graft case that forced Perez out of office months before his term was up.

The two were found guilty of illicit association and customs fraud, though they were acquitted on the charge of illicit enrichment. The judge presiding the case did not immediately say how many years of prison they were facing.